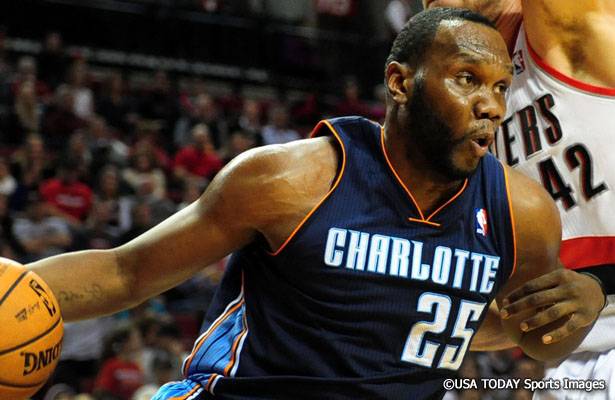 Al Jefferson has rejuvenated the Charlotte Bobcats organization since signing with the team last summer. Over the course of this season, he has been a consistent 20-10 threat, earned Eastern Conference Player of the Week and Month honors, and propelled the Bobcats to a playoff berth for only the second time in franchise history.

As the regular season winds down, first-year head coach Steve Clifford discussed what has stood out to him about his team leader and Jefferson also offered his take on what has been working so well for him in his latest NBA stop.

Jefferson was criticized early in his career for his defense. This season, he is averaging a career-high 8.6 defensive rebounds per game and has been a paint protector for the Bobcats.

Clifford: “He’s a lot better than I thought. But again, he has good instincts of how to play. To me, if you have a feel for the game and then you work at it, you have a chance to be good defensively. … If you watch him defensively, he has a good feel for how much to help. Those are the things you don’t teach as a coach. I think his natural instincts on just how to play basketball come into it.”

Jefferson: “To me, I always felt like defense was mind over matter. [I have] 10 years experience, understanding what it takes to be on a good team to have a chance to get to the playoffs and have success in the playoffs. When I signed here in Charlotte, that’s one of the things coach told me I was going to have to do. I was going to commit myself to become a better defensive player.”

Down the stretch, the Bobcats have been able to rely on Jefferson. He is averaging 5.2 points (47.9% FG), 2.8 rebounds and 0.3 turnovers in the fourth quarter this season.

Clifford: “If you look at his fourth quarter efficiency — and we’re going to him and the other team knows we’re going to go to him — he’s really delivered at a very high level almost every night. … He just doesn’t miss a lot. … He gets the ball and he makes the shot. He also rebounds well in the fourth quarter.”

Jefferson: “A lot of times when I was younger, [I’ve] been on teams where we’d play great for three-and-a-half quarters. In the fourth quarter, even [in Boston] when we were on an 18-game losing streak, a lot of those games we lost in the last three or four minutes of the fourth quarter. That’s very important. You have to learn how to close games, especially because the sooner you slack up, these teams are great and they’ll take advantage.”

Jefferson entered the NBA when he was a teenager. Now at 29 years old, he delivers veteran experience to a young Bobcats locker room, which will be instrumental in the postseason.

Clifford: “The bigger part of it is just what he’s brought to our locker room — professional, prideful, a very good competitor. He’s really taken the responsibility of helping turn our franchise around very seriously.”

Jefferson: “Ten years in, I have a lot of experience. I’ve been around a lot of great leaders. In this time in my career, understanding what it takes to win. I knew when they brought me here, not only for me to put up points and rebound and play defense, they also brought me here to be a leader, a vocal leader, something that I never did. I’ve always been a leader by setting example and now I’m vocal. I knew that was something I had to do.”