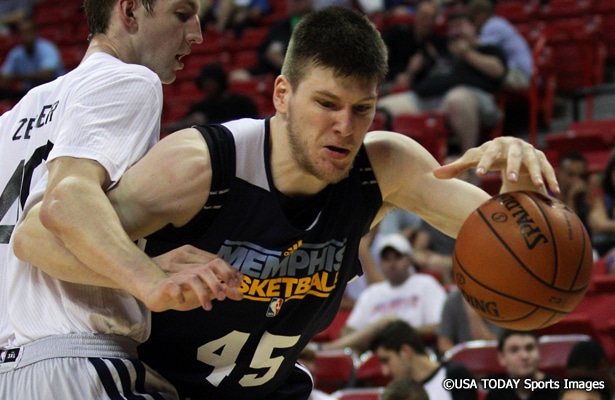 When the 2013 Las Vegas Summer League came to an end, former Notre Dame star Jack Cooley could finally breathe a sigh of relief. He may not have left with a guaranteed spot on a NBA team’s roster, but he left with something more important: The feeling that comes with knowing that no matter what the future holds, he left it all out on the court over the last two months and gave it everything that he had.

Getting into the NBA is no easy task, especially for blue collar, role players like Cooley. There are only 450 roster spots available; once you get past the stars and core rotation players, very little separates those who are in the league and those who are outside of it. And, there’s always a laundry list of factors that go into who makes the cut. Sometimes it comes down to who is willing to take a gamble on a partially guaranteed contract over more lucrative offers outside of the league.

Amid questions over whether his ability to regularly produce double-doubles would translate against elite competition on a nightly basis, Cooley went out and averaged a double-double both in the Portsmouth Invitational and then in the Las Vegas Summer League with the Memphis Grizzlies. At the end, he was one of the few undrafted free agents to have the opportunity to get invited to a training camp.

However, Cooley’s dream is to play in the NBA, not just have a shot at it. As vindicating as his summer success was, it also exposed what he needed to work on in order to ensure his spot beyond training camp. So, he took the bigger guaranteed offer from Trabzonspor of the Turkish League with the goal of leaving there a bona fide NBA player.

“Definitely my outside shooting was one of the things on the offensive end, making sure that my shot got better, and I believe I’ve done that and also foot speed on the offensive end and defensive end, showing on balls screens a little better,” Cooley said to Basketball Insiders when asked about where he was told he needed to improve the most. “In the European style of play, ball-screen defense is geared more on the big’s responsibility than the point guard’s, where in the NBA point guards seem to be more athletic sometimes and can fight around ball screens easier where over here it’s more on the big man. That’s made me improve my foot speed by necessity really now and I’ve done a good job of working on that so I can show quickly on guards and recover back to my man.”

By going to Turkey, Cooley rid himself of all uncertainty and distractions for the next year. Spending time in a NBA training camp would have been invaluable and he almost certainly would have been selected in the NBA’s Development League, but the stability that Turkey has provided could end up being a difference maker in achieving his long-term goal.

“That’s one of the great parts is that that’s all you have is to get better at your game and focus on that, there’s no distractions,” Cooley said. “It’s a huge positive for this because there’s nothing else to do but go home and watch movies when you can just stay in the gym. I make sure I always get to the gym an hour before and get shots up and stay an hour after to get more shots up. It’s always good to have that much time to spend on getting better and I take advantage of that.”

On the down side, the move forced Cooley to make a lot of sacrifices in his life outside of basketball. While he has become good friends with his teammates, most of whom speak English, and enjoys Turkey and its natives, there’s no replacing the close circle of friends and family that Cooley is now thousands of miles away from. Just to have a short conversation with them he has to stay up in the late hours of the night because of the time difference, and coordinating schedules is always a difficult task. But, it’s a sacrifice well worth it because this upcoming summer is going to be the most important in his career.

“I would agree that this summer is very, very important and I’m working extremely hard to make sure this happens this summer,” Cooley said. “But I believe if it doesn’t happen this summer that there’s still a chance, I would never rule out anything. There’s stories of players who were playing overseas for years and didn’t make it to the league until their fifth or sixth season. I’ve heard stories like that but there’s a very high precedence on this upcoming season and that’s on the forefront of my mind. I really want to play in the NBA. That will always be my main goal.

“I always have a chip on my shoulder when I’m out there … When I look over there [in the NBA] and I see players I believe I’m better than it just fuels me to believe next year or in the future I can go over to the NBA and have some success of my own. It just fuels me to keep working harder every day to make sure that happens.”

Cooley is averaging 13.9 points and 7.6 rebounds in 23 minutes of action a night.

Those may not be the rebounding numbers you’re accustomed to seeing from him, but that’s not because he’s gotten away from what got him this far. In the Turkish League, once a rebound is tipped, no player can receive credit for it. So, those 7.6 rebounds that he averages are only the ones that he gains complete control over without being tipped first.

His team has been riddled with injuries and, as a result, he’s had to spend a lot of time at the center position, where he is undersized by NBA standards. But considering the level of competition he’s going against, it should only help instill faith that he can get the job done at the next level if necessary. And, if they ask him to play the power forward position instead, that’s where he’ll really be able to showcase the developments in his weaknesses.

“I personally believe I can play either of those two positions and that is my goal to show all of the teams that are looking at me that I can play the four and five and guard both positions very well,” Cooley said. “I firmly believe I can do that in the NBA. Just as it is over here right now, whatever a team needs from me at the NBA I feel I can be successful at both and I’ll play my hardest regardless of which position they put me at to help the team.”

Many players who have previously been in Cooley’s shoes get too caught up in regretting not being where they should be instead of appreciating where they’re at. That’s not the case with Cooley, though.

Only time will tell if Cooley can crack the NBA bubble, but he’ll never have to wonder if he’ll be able to make a living playing this game again like he did after college. His future as a professional basketball player is secure, the only question is where it’s going to take him next.