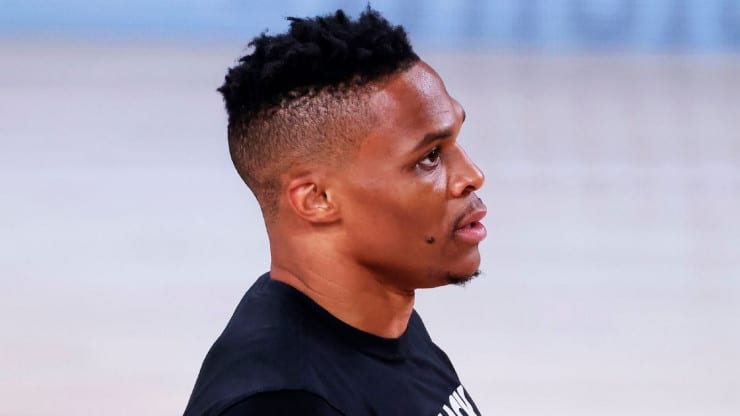 The Los Angeles Lakers have formed their three-headed monster as they pursue the franchise’s 18th championship next season. Just as the NBA Draft was getting started, the Lakers completed a deal with the Washington Wizards that landed them the 2016-17 league MVP, Russell Westbrook.

The deal sent Kentavious Caldwell-Pope, Kyle Kuzma, Montrezl Harrell and the 21st overall pick in this year’s draft to Washington, paving the way for Westbrook to join fellow superstars LeBron James and Anthony Davis. While the Lakers added a dynamic point guard, not everyone is sold on the idea that the Lakers are the team to beat in the loaded Western Conference.

Over the past several weeks, the Lakers were rumored to be seeking perimeter shooting. Some reports had Los Angeles linked to guys like Chris Paul, Buddy Hield and DeMar DeRozan. When the dust settled, it was Washington that made the deal as Westbrook informed the front office that he preferred the Lakers as a destination.

The move is a homecoming of sorts, as Westbrook grew up in the area and spent two seasons playing at UCLA, leading the Bruins to the 2008 Final Four. He had a solid 2020-21 season, averaging 22.2 points, 11.5 rebounds, and 11.7 assists per game for the Wizards, who earned the No. 8 seed in the playoffs.

Oddly enough, this is the third straight offseason in which the 9-time All-Star has been traded. After leaving Oklahoma City, Westbrook was not able to find postseason success in Houston or Washington. Will that now change in Los Angeles?

For all of his accomplishments, Westbrook’s legacy has been defined by his play during the regular season. This past season, the point guard passed Oscar Robertson for the most triple-doubles in the history of the game. Out of his 184 triple-doubles, only 12 have come in the playoffs. By comparison, Magic Johnson has the most playoff career triple-doubles with 30, and James is next with 28. Now all three will have played for the Lakers during their careers.

The thing about triple-doubles (and this is especially the case with Westbrook) is that they don’t always translate to wins. They clearly help the team overall but some would argue that a more balanced attack is tougher to stop. History has shown that having a “big three” is almost a requirement to be considered a legitimate championship contender, but this trio in Los Angeles doesn’t exactly fit together like many of those others.

As talented and valuable as Westbrook has been over the course of his career, he needs to have the ball to be effective. His poor perimeter shooting has been the big hiccup in his game, and that is something that this Lakers team desperately needs. The problem isn’t that any of these three won’t share the ball. In fact, they had already discussed checking their egos even before this trade went down.

LeBron James, Russell Westbrook, and Anthony Davis got together at LeBron’s house two weeks ago and agreed to set aside their egos and focus on winning a championship in LA. Per @BA_Turner pic.twitter.com/CDhidtvHxv

Westbrook has never had a problem sharing the ball. He was able to co-exist with Durant in Oklahoma City, Harden in Houston and Beal in Washington. The difference in this scenario is that he will be occupying the same space as James and Davis. The concern is efficiency. Out of 34 players to average at least 20 points per game over the last four seasons, Westbrook ranked 33rd in true shooting percentage.

When James drives to the rim or when Davis is facing a double-team inside, how confident will they be in passing out to Westbrook for a three-pointer? Better yet, how patient will they be if the shot isn’t falling? We have already seen what happened with Danny Green and Caldwell-Pope.

Now that the Lakers have assembled their trio of stars, many fans are hopeful to witness an NBA Finals matchup where James and the Lakers meet Kevin Durant, James Harden, Kyrie Irving and the Brooklyn Nets. As juicy as that series would be, the Western Conference is a gauntlet. There is no guarantee that the Lakers will make it there.

What helps their path is that the crosstown rival Clippers will likely be without Kawhi Leonard next season. The Denver Nuggets will be without Jamal Murray and the Golden State Warriors might not be the Warriors from four years ago. There is also uncertainty surrounding Damian Lillard and the Portland Trail Blazers and some potential roster changeup with the Utah Jazz.

According to oddsmakers at @SportsBettingAG, the Lakers are now title favorites after their trade for Russell Westbrook. pic.twitter.com/q15ZsMSzES

Considering all of the top-tier point guard talent available in free agency this summer, the Lakers may have been better off trying to do a sign-and-trade. Such a scenario would have hard-capped them but after this deal, they are just $12.6 million below the hard cap with just five players on the roster. Putting together a deal for Hield is still possible, but the Lakers will have to get creative. Adding a third team to this trade, in particular, is one way to accomplish that. Again, it is possible but it will be complicated.

In a perfect world, the Lakers could have worked with Toronto on a sign-and-trade for Kyle Lowry. Even though Lowry is older than Westbrook, the current window for Los Angeles to win with this group is closing fast. Lowry would be cheaper and a much better fit overall. His durability, toughness, defense and high basketball IQ would pay dividends for the Lakers. Adding in the fact that he is a much better shooter, one has to wonder why the Lakers wouldn’t pursue this route instead.

Westbrook is still going to help this team. He is a tremendous asset for them in the regular season, especially when James is on the bench or unable to play. Having another floor general on the court to generate offense is something they have not had since James arrived. If Los Angeles can land some above-average shooting to the roster, Westbrook could flourish in this role.

With James sliding to the power forward position and Davis playing more at center, the key for Los Angeles will be to surround these guys with shooters. The Lakers ranked 21st in three-point percentage and 25th in makes last season. Expect the organization to be busy when free agency starts next week. Targets will include guys like Duncan Robinson, JJ Redick, Norman Powell, Evan Fournier, Doug McDermott, Bryn Forbes, Patrick Mills, Reggie Bullock, Kendrick Nunn and Alec Burks.

Obviously, the Lakers are counting on their individual talent and figuring out the rest later. It likely means the end for Dennis Schröder. Can Alex Caruso fit in and where does this leave Talen Horton-Tucker? The rest of the roster is in limbo, but the star players and the front office both feel confident that they will land the other pieces that they need to raise another banner next summer.