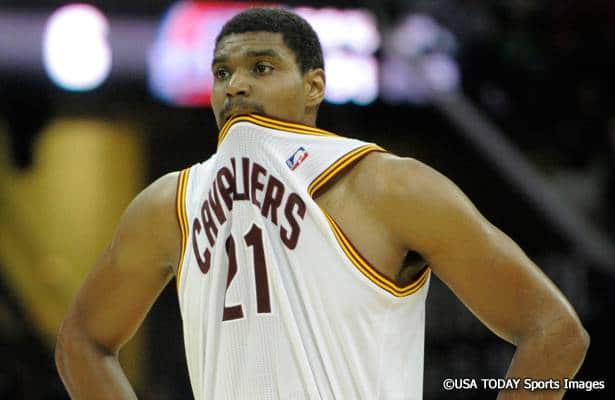 It isn’t too often a 26 year old former All-Star center with two NBA championship rings finds themselves on the unemployment line for an extended period of time, but Andrew Bynum is now playing the waiting game on his next destination.

Bynum was traded by the Cleveland Cavaliers, along with future draft picks, to the Chicago Bulls in exchange for All-Star swingman Luol Deng. Bynum was subsequently released by the Bulls in a financially inspired move designed to help the franchise get below the luxury tax threshold.  The Bulls saved close to $20 million in the transaction.

The situation in Cleveland soured relatively quickly and there was no chance Bynum was sticking around long term in Chicago. Upon his release from the Bulls, Bynum reportedly received exploratory interest from title contending teams such as Indiana, Los Angeles (Clippers) and Miami. But after an initial buzz, the market has quickly gone quiet regarding Bynum.

Basketball Insiders recently reached out a NBA agent to get their perspective on Bynum from afar and how they would handle the veteran center moving forward. Money aside, the agent feels the most important agenda item is for Bynum to get healthy before returning to an active roster.

“Bynum is definitely a tough situation,” the source told Basketball Insiders. “I don’t think he was completely healthy when he was out there.  He was probably was more motivated by the incentives in his contract than actually helping a team.  Now, the biggest thing for him is getting healthy. Period.  Take as long as he needs to because he’s still a young guy.  So I would probably wait until the end of the season in order to find the best situation for him – long term.”

In 24 appearances with the Cavaliers this season, Bynum averaged 8.4 points and 5.3 rebounds on just 42 percent shooting from the field.

USA Basketball announced the 28 players who were selected for the 2014-16 USA Men’s National Team pool. This pool will serve as the talent group for USA Basketball to use for the 2014 world championships and the 2016 Summer Olympic the United States qualify to participate.

Here is the complete list of the selected players:

The group features 12 Olympic Gold medalists and USA Basketball leadership says they will continue to add players as the need arises in the future.

“This is the first step of building the USA Basketball National Team pool of players for 2014-16. This roster is extremely talented, deep and versatile,” said USA Basketball Chairman and National Team Managing Director Jerry Colangelo. “We are very fortunate to have 11 of the 12 members who won gold at the London Olympics wanting to be part of the national team program again. To receive that kind of commitment is remarkable and it demonstrates how much it means to our players to represent USA Basketball and their country.

“Continuity and familiarity with international basketball are critical parts in our success, and between our coaching staff and these 28 players we certainly have that. Every one of the selected players has been involved in USA Basketball previously and that speaks to how well our pipeline is working. Because of injuries and circumstances that will develop where players won’t be able to participate, we know we need flexibility with the roster and as we did in 2006-08 and 2010-12, the pool of players will be fluid, so you will see the addition of players as they emerge and as they are needed.”

Knicks’ Remain Most Valuable NBA Franchise, But 2014 Season Is Slipping Away

The New York Knicks remained atop of the annual Forbes NBA valuations list. The franchise is now worth an estimated $1.4 billion according to Forbes estimates. However while business at the box office is undoubtedly booming, the team’s season is rapidly slipping away and continues to disappoint its fan base.

If the playoffs started today the Knicks (15-27) would be on the outside looking in despite the noted struggles of the Eastern Conference. The team is currently on a five game losing streak and Wednesday’s loss at home to the rebuilding Philadelphia 76ers may have the club’s proverbial rock bottom moment.

The loss to Philadelphia dropped the Knicks’ record at home to a woeful 7-15 on the season, which left All-Star forward Carmelo Anthony searching for answers in the aftermath.

The Knicks have dropped their last three contests at Madison Square Garden versus sub .500 competition in Brooklyn Los Angeles (Clippers) and Philadelphia. Last season’s team won 54 games and reached the second round of the playoffs for the first time since the 2000 campaign. New York is on pace to win just 29 games this season as it stands today.

“This is the time right here to make up ground and we’re not,” Knicks guard J.R. Smith said. “We’re playing better on the road than we are at home and it should be the other way around if anything.”

The Knicks’ next four games come against sub .500 competition in Charlotte, Los Angeles (Lakers),  Boston and Cleveland. This represents another opportunity for the team to turn the ship around.