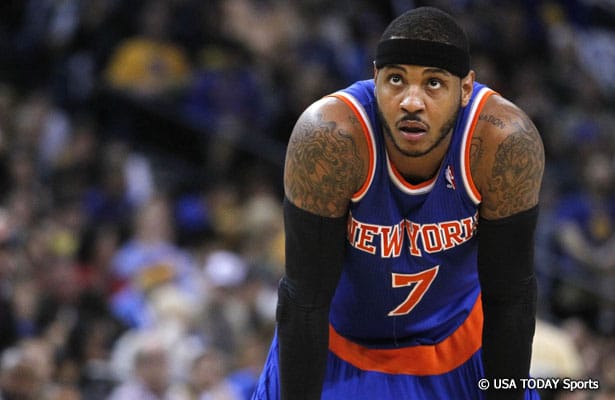 The start of free agency is less than a week away and arguably the biggest name on the market, besides LeBron James, is New York Knicks All-Star forward Carmelo Anthony.

The Knicks, now under the guidance of newly crowned president of basketball operations Phil Jackson, are at a pivotal crossroads. New York won just 37 games last season and missed the playoffs despite boasting a payroll just shy of $90 million. As a result, Jackson was given a lucrative deal to bring his 13 combined championship rings to town to start the reloading process. Jackson then entrusted rookie head coach Derek Fisher to run the show from the sidelines.

Now the Knicks have turned their attention to their biggest priority of the summer – re-signing Anthony. The 30 year old forward is eligible for a max level five-year $129 million deal from New York in free agency. No other franchise in the league can offer more than a four-year pact, which puts New York in the driver’s seat.

However Jackson has consistently held his position that in order for the Knicks to win at a high level, Anthony would have to make some sacrifices in his checkbook.

“He’s the one that opened that up that it wasn’t about the money,” Jackson said according to Frank Isola of the New York Daily News before the NBA draft on Thursday. “So I challenged him on that because I want our fans to see he’s a team player, that he’s going to do what was best for this team to get ahead farther and faster.

Anthony is coming off a season in which he averaged 27.4 points per game and connected on over 40 percent of his attempts from three-point range. In 77 regular season games Anthony never scored below 10 points and recorded five games of 40 or more points.

But Jackson has turned to the media in order to hammer home the message that if it is truly about winning, then Anthony may have to leave money on the table so the Knicks can have the flexibility to build a championship roster.

The Knicks may be hesitant to give Anthony a max deal this summer, but there are numerous suitors rumored to have the high scoring forward at the top of their wish lists once free agency opens next week.

The Chicago Bulls have the capability to create the necessary cap room to sign Anthony and pair him alongside All-Stars Carmelo Anthony and Joakim Noah. Houston and Miami are two other prime destinations who may join the Anthony sweepstakes and there are sure to be countless others willi ng to join the party.

For now Jackson is using the legacy over money angle while publicly speaking a message of avoiding max level deals because it limits a team’s options long term to build a complete roster.

“I think it puts limitations on a team,” Jackson said. “What happens is then you end up having two or three players that have big contracts and everybody else’s is either veteran minimums or young players coming in. You don’t have that middle ground for a player that’s veteran, comfortable leadership-quality people. Miami explored it. I think they got the most out of it.”

Four-time MVP LeBron James is undoubtedly the biggest free agent on the market this summer and the Miami HEAT have made it clear that there would be no shortage of stops pulled out in order to secure his autograph on another contract.

Step one – dealing for James’ favorite prospect in the draft.

My favorite player in the draft! #Napier

The Charlotte Hornets officially drafted point guard Shabazz Napier with the No. 24 overall pick and Miami quickly swooped in offering the No. 26 overall pick and two second round selections in order to secure the former University of Connecticut standout.

Napier said he hopes James will decide to re-sign in Miami this summer.

“I would hope so,” Napier said according to ESPN after the draft. “He’s one of the best players in the world. So if me going there helps him come back, it just betters our chances of being a complete team.”

HEAT president Pat Riley says James didn’t suggest he should acquire Napier, but the young guard fits the team’s mold and it doesn’t hurt that his marquee free agent was onboard.

“I know LeBron tweeted something out in the NCAA [tournament] about him,” Riley said. “Why not. If LeBron and I have the same taste in talent, so be it. But he didn’t call me on the phone, or he didn’t make a point to me about it.”

“He’s a very competitive person, and I think competitive without a huge ego, too. He’s a winner. He’s talented and he’s skilled. You just have to watch him play the game and you can see the competitive level we all like.”

The acquisition of Napier will also likely mean the exit of point guard Mario Chalmers who is headed to unrestricted free agency this summer. Chalmers struggled mightily toward the latter stages of this year’s playoffs and virtually disappeared during Miami’s Finals loss to the San Antonio Spurs.

According to an AP report, the Charlotte Hornets have acquired small forward Alonzo Gee from the Cleveland Cavaliers in exchange for the draft rights to Stanford product Dwight Powell (No. 45 overall) and veteran center Brandon Haywood.

The Cavaliers selected forward Andrew Wiggins with the No. 1 overall pick in Thursday’s draft which ultimately made Gee expendable.

Haywood, who missed all of last season recovering from a stress fracture in his left foot, has started 548 career regular season games and has career averages of 6.9 points, 6.1 rebounds and 1.4 blocks per game since entering the league in 2001-02.

Gee, a five year veteran, started all 82 games for Cleveland in 2013 but saw a significant decline to his minutes this past season adjusting to recently dismissed head coach Mike Brown.

Must Read Material From Our NBA Draft Coverage

2014 First Round Pick Analysis: The Basketball Insiders team provides our instant reaction to every pick in the first round of this year’s draft.

2015 NBA Mock Draft: Basketball Insiders takes an early look at the 2015 NBA Draft class, because it is never too early to look ahead