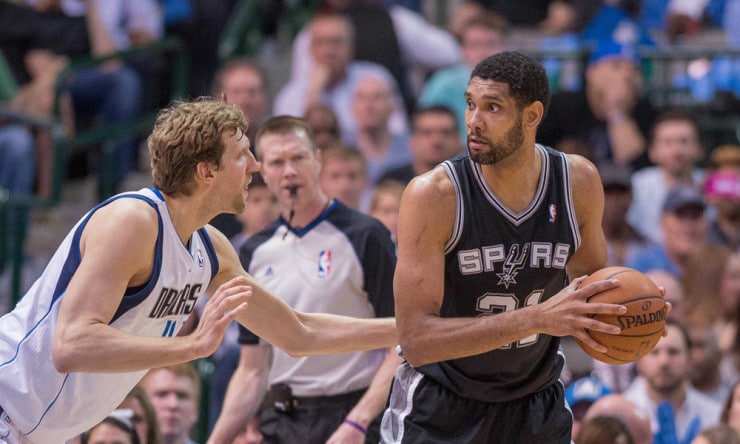 It’s not even December yet, but already there is talk that this year’s MVP race could be the most hotly-contested in the modern history of the game.

James Harden is fourth in the league in scoring with 28.3 PPG, but he’s also leading the league in assists with 12.4 APG and hauling in 7.8 RPG. Kawhi Leonard is averaging 24.8 PPG and is the frontrunner to win a third consecutive Defensive Player of the Year Award. LeBron James is averaging 23.5 PPG, 9.5 APG and 8.2 RPG going at what looks like about 75 percent speed, and his team has only lost two games. Chris Paul has the Clippers playing some of the best basketball in team history, Kevin Durant is scoring more efficiently than he’s ever done for the Western Conference’s top team, and even guys like DeMar DeRozan, Jimmy Butler and Kemba Walker have gotten their fair share of MVP chatter early in the season.

At this point in the season, it’s impossible to know which of these guys will win the league’s most prestigious individual accolade, but there’s no question it will be close.

The real question, though, is whether it will be historically close. The following offers a look into some of the closest MVP races in recent league history:

It’s always fun when an MVP race is debatable among three great players rather than just two, and 1999 was an excellent opportunity for exactly that sort of power struggle following Michael Jordan’s retirement the season before. Someone had to grab the mantle, and these three powerful big men all were happy to take their stabs at it.

Malone averaged 23.8 PPG, 9.4 RPG and 4.1 APG, Mourning averaged 20.1 PPG, 11 RPG and 3.9 BPG and Duncan averaged 21.7 PPG, 11.4 RPG and 2.5 BPG in that first season post-Jordan. It seemingly was impossible to select one guy over the other two, and the final votes reflected that indecision. The first-place votes were tight with Malone taking 44, Mourning getting 36 and Duncan earning 30, but the second- and third-place votes were just as tight, with those numbers landing all over the place. Malone ended up winning the thing with 827 total points, though Mourning finished just 54 points behind, and Duncan only 33 points behind him.

In a lot of tangible ways, 2001-02 was the year that both Duncan and Kidd truly blossomed as legendary, future Hall-of-Fame players. David Robinson passed his metaphorical torch to Duncan that year, just one season out from his own retirement. Meanwhile, Kidd found his way to New Jersey and helped the Nets bloom into the Eastern Conference’s representative in the 2002 NBA Finals – the first ever trip to the championship series for that franchise.

Already, both were seen as two of the best players at their respective positions, but they also showed just how transcendent they could be in a season where there really was an excellent debate over which guy would win the MVP award. Duncan averaged what would prove to be a career-high 25.5 PPG to go along with 12.7 RPG and 2.5 BPG, all for an elite Western Conference team. Kidd turned nothing into something in Newark behind his 14.7 PPG, 9.9 APG, 7.3 RPG and 2.1 SPG.

Ultimately, Duncan won the vote, 954-897, a difference of only 57 points. That tight tally was a testament to just how good each player really was that season.

Looking back, it’s pretty incredible that Nash won back-to-back MVP awards in the mid-aughts, but his first one was considerably less controversial than his second one. Upon his arrival in Arizona, Nash led the Suns to 62 wins and supercharged a Phoenix offense that would ultimately serve as the brightest spot on Mike D’Antoni’s resume.

O’Neal, meanwhile, was doing fantastic things for a Miami HEAT team in his first season there after winning three rings in Los Angeles. With Dwyane Wade coming into his own and O’Neal giving the burgeoning HEAT a competitive heft that they hadn’t experienced previously, it really was no surprise that he’d get his fair share of MVP votes that season, as well.

Still, the unexpectedness of Nash’s coming-out party paired with his team’s success made the narrative too interesting to ignore, which is why he ended up winning this race by a scant 34 points.

The closest thing to 1997’s MVP race that we’ve seen this decade is when Derrick Rose split up what easily could have been a five-year stretch of LeBron James MVP awards, mostly because the voters simply seemed tired of handing the hardware over to The King every year. In an attempt to spread the wealth a little and give themselves something different to write about, media named Rose MVP in 2011.

Imagine whatever tepid hullabaloo that award caused and multiply it by a million to get a sense of how controversial the 1997 MVP award was. Jordan was at the peak of his career, four championships in and well on his way to winning a fifth, but Malone put up numbers just good enough to justify fatigued voters going in a different direction. In fact, Malone won 63 first-place votes compared to Jordan’s 52, but in terms of total points Jordan finished only 29 total points behind the Mailman. Malone won 85.7 percent of his possible votes, while Jordan snagged 83.2 percent of his, and many NBA people were simply horrified by those results.

Still, considering how many pro-Jordan stories had printed in the two years since his return from Retirement No. 1, it’s easy to see how media voters may have grown jaded toward MJ’s dominance – both on the court and in the papers. In truth, Malone had a great season that was just good enough to boot the game’s best-ever player from winning an MVP trophy he probably deserved.

This might be the one that ends up looking the most like this current year’s MVP race before everything is all said and done. There were three legitimate candidates for the award, which included Jordan (33.6 PPG, 6.9 RPG and 6.3 APG), Johnson (22.3 PPG, 11.5 APG and 6.6 RPG), and Barkley (25.2 PPG, 11.5 RPG and over 60 percent field goal shooting). Out of that trio, Barkley ended up receiving the most first-place votes.

He didn’t win, though, which was the truly weird thing about this particular MVP race. It’s the only time in league history that a player has won the most first-place votes for MVP, but not won the total vote. The actual award went to Johnson, whose Lakers won 63 games that year.

Jordan was the one who arguably should have won the award. He led the league in scoring and steals, giving him a two-way value that the other two guys simply didn’t have. Despite all that, three voters left Jordan completely off of their ballots. A change there, obviously, could have changed the entire complexion of the vote.

In the end, Johnson bested Barkley by just 22 points, with Jordan only another 43 points behind him.

If Westbrook averages a triple-double, it’s hard to envision a scenario where he doesn’t win this award, even if the Thunder completely fall off the map in the Western Conference, but team wins could easily sway votes toward other players who may be nearly as successful statistically and just as important to their team’s success, but with more overall wins. This race could be tight, and it could be controversial, at which point we may have to tweak this list a bit.