Derrick Rose, at 22 years old, was the youngest Most Valuable Player in NBA history. Chicago had a strong supporting cast made up of players who hadn’t peaked yet – such as Joakim Noah, Luol Deng, Kyle Korver, Omer Asik and Taj Gibson. They also had one of the NBA’s best up-and-coming head coaches in Tom Thibodeau, who was the 2010-11 Coach of the Year in his first season with the Bulls after his 62 wins tied the record for most victories by a rookie coach. Throw in an amazing 2011 NBA Draft in which Chicago landed Nikola Mirotic with the No. 23 pick and Jimmy Butler with the No. 30 pick, and it seemed the Bulls were perfectly positioned for the future.

However, serious injuries to Rose obviously held the Bulls back, a number of key players left through free agency or trades (including Deng, Korver and Asik), and Thibodeau butted heads with management to the point that his future in Chicago is now up in the air despite leading the team to a 255-139 record.

These last few years have not gone the way fans in Chicago hoped, and now the Bulls’ window seems like it could slam shut at any moment.

Chicago is a legitimate contender this year, but the team could look very different in the near future so there’s a sense of urgency to make a Finals run this season.

Rose’s health and strong play can’t be taken for granted, many people around the NBA believe Thibodeau could be fired or traded as soon as this summer, and the team relies on a number of players who are age 30 or older such as Noah (30), Pau Gasol (34), Mike Dunleavy (34), Aaron Brooks (30) and Kirk Hinrich (34). Not to mention, Butler is a restricted free agent this summer (although he seems like a lock to return) while Dunleavy, Brooks and Hinrich can become unrestricted free agents. 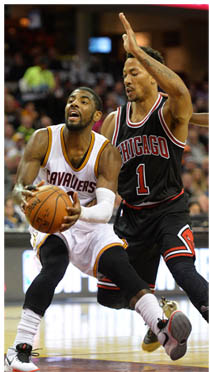 The Bulls, who are at full strength for the first time in years, need to strike now. They have a real shot at getting past the Cleveland Cavaliers in the Conference Semifinals, especially since the Cavs will be without Kevin Love due to a dislocated shoulder. They’ll also be missing J.R. Smith for the first two contests due to a suspension for hitting Jae Crowder of the Boston Celtics in the first round.

If this Cavs team stays together and continues to develop, all signs point to them improving each year (barring unexpected setbacks, which the Bulls know all about). Cleveland could be a team that strings together several Finals appearances and, if things go really well, multiple championships. This is what LeBron James did with the Miami HEAT, and that was with an aging Dwyane Wade and Chris Bosh.

Now, he has Kyrie Irving, 23, and Love, 26, as his star-studded teammates. Cleveland’s trio (assuming it stays together) should continue to get better and more comfortable playing together with time, which is why this year may be the Bulls’ best chance to win a title.

This is similar to when the veteran Dallas Mavericks won their title over James and the HEAT in 2011, right before Dallas underwent huge roster changes and Miami won back-to-back championships. The Bulls need to take advantage of this opportunity because it appears they’ll be undergoing significant changes in the near future, whereas the Cavaliers don’t seem to be going anywhere (and are poised to keep improving).

It’s not often that the Bulls have been completely healthy. It’s even rarer for the Bulls to be healthy and facing off against an opponent that’s missing a star. They’re used to being limited from injuries, not benefiting from them.

If they can get past Cleveland, the Bulls could end up in the Finals with a shot at a Western Conference team that may be worn down since there are so many talented teams in that conference.

Not to mention, Chicago looks very good right now, especially after closing out the Milwaukee Bucks with a 120-66 beat down in Game 6. That was the largest margin of victory in a series-clinching game in NBA history.

Even though it took them six games to beat the Bucks, they should be feeling great after that dominant showing. Their stars looked good too, posting some impressive numbers in round one.

Butler was excellent against Milwaukee’s second-ranked defense, averaging 24.8 points, 5.5 rebounds, 3.8 assists, 2.5 steals while shooting 47.6 percent from the field and 40.5 percent from three-point range. Rose showed glimpses of brilliance and was very aggressive, as he averaged 19 points, 6.5 assists, 4.3 rebounds and 1.5 steals in the six games against the Bucks. Gasol looked very good as well, with first-round averages of 16.3 points, 11.8 rebounds, 3.7 assists and 2.3 blocks while shooting 48.7 percent from the field.

This could be the Bulls’ year, and it’s tough to imagine this squad (as currently assembled) hoisting the Larry O’Brien trophy down the road given all of the question marks surrounding the team. Chicago can’t squander this opportunity.

Conley Unsure When He Can Play Again

A week and a half ago, in Game 3 of the Memphis Grizzlies’ first-round series against the Portland Trail Blazers, Mike Conley took an accidental elbow to the face from C.J. McCollum and needed surgery to repair the facial fracture. He has been ruled out indefinitely and has now missed three straight contests, as he had to sit out of Sunday’s Game 1 between the Golden State Warriors and Memphis Grizzlies.

While the Grizzlies were able to advance past the Blazers even without Conley due to the 3-0 cushion they had, they will need their floor general back on the court just to have a chance against the Warriors.

Golden State won Game 1, 101-88, led by Stephen Curry’s 22 points, seven assists and four steals. Memphis has had to rely heavily on reserves Nick Calathes and Beno Udrih, who combined for seven points (3-11 from the field) and three assists in Game 1. They clearly miss Conley on both ends of the floor, especially when facing off against a dominant point guard like Curry.

Conley was able to wear a mask and go through a light warm up prior to Game 1, but it remains to be seen when (or if) he can return. His eye is very swollen and red, and after Game 1 he admitted that the loud noises in the arena affected him.

“Today was a big step being able to go in front of the crowd and the loud noise,” Conley told Marc J. Spears of Yahoo Sports. “I did all right. All the horns and stuff really aggravated it. But it was all right.

“It’s very tough because I know how much I mean to the team and the organization. We understand we have a chance with the team that we have put together. Our time is now.”

Since the surgery, Conley hasn’t been able to be very active, so he’s unsure how he’ll feel once he plays in a game again. That’s one reason why he wanted to put up shots and go through a workout on Sunday.

“You get a lot of headaches,” Conley said. “You get a lot of pressure in that eye. It’s tough to hear loud noises and horns. Lights hurt. It’s sensitive to a lot. That’s the biggest thing. But most of all my body is trying to get used to moving around because I took a full week where I was just laying in the bed and was not moving. Just being on the court a little bit helped.

Fortunately, Conley is making progress and he is hopeful that he’ll be able to play again in the near future. The Grizzlies obviously want to get him back as soon as possible, as Game 1 showed just how desperately they need him in order to keep this series competitive.

“I know I am better than I was before.” Conley said. “I’m trying to take it one day at a time. I’ve never had this injury before. I don’t know the normal recovery time or anything. I’m just trying to be supportive and trying to be ready when I am.”