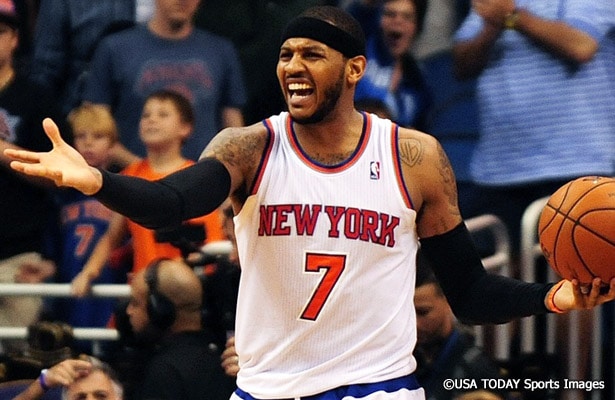 Will The Past Affect The Future?:  The New York Knicks had hoped to turn the corner after the All-Star Break. There was hope that the club could pull off a trade at the trade deadline and shore up the point guard position and make a strong push into the playoffs. With two more straight losses and having dropped eight of their last 10 games, the idea of making the playoffs for New York is becoming harder and harder to visualize and for forward Carmelo Anthony this season is becoming almost too much.

“It’s starting to get tough to handle,” Anthony said to Ray Glier of USA TODAY Sports.

“It’s definitely testing me,” Anthony said. “The frustration has definitely sunk in, just from the simple fact we’re losing games the same way over and over and we’re just not learning from that.”

Anthony continues to do as much as he can do, putting up career bests in scoring, rebounding and three-point shooting percentage while trying to stay positive despite the Knicks being almost six games out of the playoff picture with just 26 games left on the schedule.

“Hopefully it will turn around before it is too late,” he said. “Right now we’re digging ourselves into a much deeper hole. It’s not early in the season anymore, so we can’t use that excuse. Finding a way to finish out games, finish out quarters is something that we got to do and have to do coming down to these next 20 some games.”

The big challenge for the Knicks is not only making the post-season and having a chance to compete, it’s how this season will impact Anthony’s pending free agent decision. Anthony has one more season after this one on his contract but has the option to become a free agent in July, something he has repeatedly said he will exercise.

»In Related:Could Carmelo Choose The Rockets Or The HEAT?

Anthony over the All-Star break tried to quell the storm surrounding his ability to leave the Knicks, saying over and over that he wanted to remain in New York and would be willing to take less money to help the Knicks build a winner around him in New York.

With the Knicks spiraling out of control at times you have to wonder how this season will impact Anthony’s decision to stay in New York long-term. Houston Rockets center Dwight Howard endured a never ending nightmare of a season in Los Angeles last year and when it came time to re-sign as a free agent, Howard sought out somewhere he could be happy and have a chance to win.

With the Knicks season having gone so bad, will Anthony view the world the same way?

Sources close to the situation say that the Knicks are likely the only would-be suitor for Anthony willing to meet the full $22.45 million per year starting price on a new contract. Teams like the Chicago Bulls and L.A. Lakers that are constantly mentioned as possible free agent destinations are said to be unwilling to go that high in a deal for Anthony, who will turn 30 in May.

The Bulls are expected to be able to clear about $14 million in salary cap space if they use their one-time amnesty roster cut on Carlos Boozer’s final $16.8 million contract year. To get in range of the full MAX-level offer the Knicks can put on the table, the Bulls would have to basically give away an additional player like Taj Gibson or Joakim Noah to create the room to sign Anthony to a deal in that price range.

The Lakers may have enough salary cap space to sign Anthony to a full MAX offer, but that would all but exhaust their salary cap space and the word is the Lakers have eyes on a few smaller and slightly cheaper free agents to surround guard Kobe Bryant.

There is no doubt that when Anthony sits down with the Knicks to talk about his next deal that all of the trials and tribulations of this current season will come up, but what the Knicks will need to do to gain Anthony’s signature on a new deal is chart him a course to a better season next year and how they’ll be in a position to compete for a championship in the coming seasons.

The plus for the Knicks is that in July of 2015 they would have only the new contract from Anthony and about $15 million in option based contracts on the books, meaning the Knicks could have as much as $20-$26 million in free agent money to flesh out a new roster. That future flexibility will surely be a selling point for Anthony along with what’s expected to be the biggest contract offer.

There is no doubt that this season will weigh on Anthony’s final decision, but as free agency has taught us time and time again, the past really influences how a player sees the future and that’s what Anthony will have to consider when he decides to sign his next deal.

» The 2014 NBA Trade Deadline has come and gone and while we tried to get you ready for the deadline with our 2014 Trade Deadline Guide, it did become clear that many of you may not have understood what the Trade Deadline Guide was, so we’ve decided to give you a free look at what all the hype was about. Basketball Insiders produced a 100-page totally original material digital magazine built around the trade deadline. It gave you an in-depth look at all the teams, all the situations and all the players that could have been on the move. The magazine also featured some deep features on a number of topics surrounding the deadline. So in case you missed it, or didn’t understand what it was all about, here is the entire issue for FREE. Basketball Insiders will be producing a similar product build around the 2014 NBA Draft, which will drop in June.

Over the next nine days (the balance of the contract he is signed for) a lot of people are going to try and make the Collins story a bigger social statement. 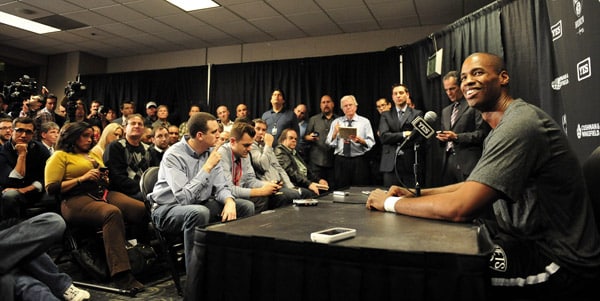 Last night, as hordes of media filed into Staples Center to witness Collins’ first NBA press availability since his April announcement in Sports Illustrated, Collins tried to keep things in perspective. He’s 35 years old. He has not played competitive basketball in almost a year. He is trying to learn the plays and be helpful to his team. What he is not trying to do is be a lightning rod or a flag bearer for bigger issues. He simply wants to play.

For some, maybe this is a story. But for Jason Collins, this is simply a player trying to stick with a team. Hopefully that message, the message about the player, doesn’t get lost in what’s surely going to be a circus of social stories.

Jason Collins wants to play basketball. The Brooklyn Nets have given him a chance to do that. Before we start talking about history or the milestones or the barriers that may or may not have been broken, can we just let Jason play basketball? That’s what Jason wants and if this truly is a moment in sports history that’s what this should be about. It really shouldn’t be about anything else.