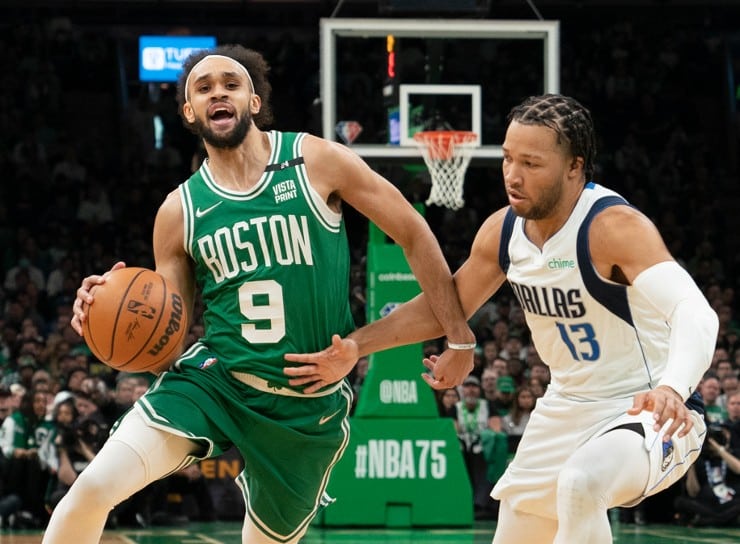 NBA free agency began last Thursday and contending teams have gone to work; here is our list of the top offseason winners and losers during NBA free agency 2022. Teams analyzed include the Celtics, Lakers, Timberwolves, Nets, Pelicans and Mavericks. Is Zion Williamson overpaid on the Pelicans? Are the Mavericks worse without Jalen Brunson? Find out down below.

First off, the Celtics traded Daniel Theis, Aaron Nesmith, a 2023 first-round draft pick and other players to the Pacers for Malcolm Brogdon. Last season, the sixth-year guard averaged 19.1 points, 5.1 rebounds and 5.9 assists per game in 36 games played. Statistically, the Celtics’ defense was the best in the league in the 2021-22 season.

And now the team has added a playmaking guard who can benefit Boston’s offensive schemes. Then, they signed Danilo Gallinari after the Spurs waived him. They also re-signed Sam Hauser and Luke Kornet. So far, the Celtics’ offseason has been terrific. One NBA rumor suggested that G.M. Brad Stevens was pursuing DeMarcus Cousins, too.

Imagine if the Celtics end up trading for Kevin Durant. There was a time many years ago when Tom Brady and Kevin Garnett advocated for Durant to play in Boston. The two-time champion would give the team an extra push they need.

Next, Russell Westbrook exercised his $47,063,478 player option with the Lakers for next season. Plus, the team signed Thomas Bryant to a one-year, $2 million contract. With the Wizards, the fifth-year player averaged 7.4 points, 4 rebounds and almost 1 assist per game last season. Bryant tore his ACL in 2021, but the Lakers were in need of depth at center.

Not to mention, Lonnie Walker signed a one-year, $6.5 million contract with the team. In a total of 70 games played in the 2021-22 season, Walker averaged 12.1 points, 2.6 rebounds and 2.2 assists per game. Back in April, the front office also fired then head coach Frank Vogel. Now the team will have the opportunity to start over fresh under coach Darvin Ham.

Furthermore, the Jazz traded Rudy Gobert to the Timberwolves for Malik Beasley, Patrick Beverley, Leandro Bolmaro, Walker Kessler and Jarred Vanderbilt. Timberwolves G.M. Scott Layden overspent for Gobert in this trade, but he’s arguably the best center in the NBA. Keep in mind, the team already signed Karl-Anthony Towns to a four-year, $224 million extension. This team is loaded in the paint.

Gobert led the league in rebounds last season, averaging 14.7 per game. And he had the best effective field goal percentage (71%). The center also ranked second in total blocks (137) and third overall for blocks per game (2.1).

Moreover, the Jazz traded Royce O’Neale to the Nets on the first day of free agency for a 2023 first-round draft pick. Kyrie Irving exercised his $36,503,300 player option with the Nets as well. Though, it is unclear if G.M. Sean Marks will trade the seven-time All-Star in the coming months. Since he refused the COVID-19 vaccines in 2021, the guard was ineligible to play in most games at Barclays Center last season.

This was a major blow for the Nets. Even when Irving was allowed to play, he averaged 21.3 points, 5.3 rebounds and 5.3 assists against the Celtics in his team’s first-round playoff series. Offensively, he underperformed. Throw in Kevin Durant asking for a trade to the Heat or Suns, and the Nets have had a lousy offseason so far. If Brooklyn loses Durant, one could make a legitimate argument that this team has had the worst offseason in the entire NBA.

Additionally, the Pelicans offered Zion Williamson a five-year, $193 million extension. If he makes an All-NBA team next season, this contract will increase to as much as $231 million. Nonetheless, he has only played 85 games in the NBA. What if he sustains another season-ending injury?

Last offseason, Williamson underwent surgery to repair a fractured foot. After months of waiting, the medical staff never cleared the forward to play. He missed the entire 2021-22 season. To add to that, the All-Star injured his knee in college. A multi-year, super max contract like this is a big-time gamble.

In the 2020-21 season, the forward averaged 27 points, 7.2 rebounds and 3.7 assists per game. Only time will tell on whether or not New Orleans made the right choice. Williamson has yet to play a full 82-game season. For good news, according to ESPN’s Brian Windhorst, the Pelicans are working on a contract extension for CJ McCollum.

Lastly, the Mavericks lost Jalen Brunson in free agency. The guard played an important role in helping the team make the Western Conference Finals. He signed a four-year, $110 million contract with the Knicks. While Mavs owner Marc Cuban said he would be more than willing to match any available offer for Brunson, the fourth-year player wanted to play in the Big Apple. This is partially because Rick Brunson, Jalen’s father, is on Tom Thibodeau’s coaching staff.

Thus far, while Dallas gained a couple of Hershey’s Kisses, it would appear as if they lost half the Hershey’s chocolate bar. The team is worse without Brunson. Luka Doncic has to be disappointed. Other articles similar to “NBA Free Agency 2022” are on the main page.