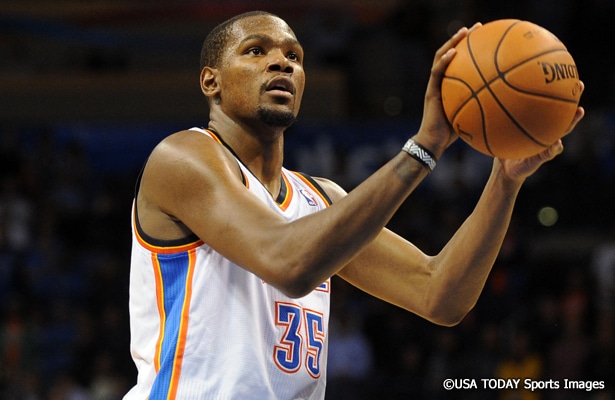 Now that we’re beyond the midway point of the NBA season, it just feels a bit more appropriate to initiate Basketball Insiders’ MVP discussion. While there are plenty of players who got off to great starts, in order to remain in actual MVP consideration overall team impact and maintained dominance take precedence over anything else. Of course, raw statistics are a significant part of the discussion, but in order to be considered the “MVP” rather than simply being the best individual player, your skills and leadership must unite in order to influence positive outcomes for your team. Without any further delay, here is our first list:

Wall has quietly put together a very strong season, following the extension he received over the summer. There were some that questioned whether he was truly a “max contract” player, but Wall has more than answered any concerns critics might have had. His outside shooting continues to be a work in progress, but Wall can change ends with the best of them, and still finds a way to get favorable shots in the halfcourt set due to his quickness and superior ballhandling ability. This season, the biggest difference for Wall seems to be that the game is slowing down for him and he’s no longer playing out of control.

Love continues to find himself in the unhappy circumstance as being arguably the league’s best power forward from an individual standpoint, but hasn’t been able to translate that into more wins for his Wolves. At 22-22 on the year, with Love having already voiced his frustrations over not making the postseason on several occasions, one has to wonder if things might eventually boil over if the Wolves are unable to qualify for the playoffs once again.

Still consider Griffin to be merely a highlight player? If so, then either you might want to invest in a second-half NBA League Pass subscription, or be certain to catch his Clippers play when they make a nationally televised game. Not only has Griffin held down the fort in Chris Paul’s absence, he’s continued to prove what seems like an ‘unspoken point’ about just how versatile he’s become as a player. Make no mistake about it, while you still don’t want to stand anywhere near the runway when he’s taking off, his further development of his post moves and mid-range jumpshot make him an absolute nightmare to matchup with on many nights.

Even though Dwight Howard was clearly the “franchise center” the league has wanted (and needed), Harden remains the team’s best and most consistent player. He’s about as complete an offensive player as you could ask for, and is routinely among the league leaders in free throw attempts. At times, his defense leaves plenty to be desired, but that is somewhat understandable for a player that is such a focal point on the offensive end. Just the same, for his Rockets to be successful, they’ll need him to return to the consistently above-average perimeter defender he once appeared to be.

Feel free to voice your concerns over Parker being on this list due to San Antonio being “boring” (which they are not), or his “numbers not comparing” to other players within the list or even outside of the discussion. The reality is, the Spurs are once again one of the league’s best teams, and Parker is still their best player and one of the leaders. Statistics and regular season awards seem to be far less significant to the Spurs, as Gregg Popovich continues to limit and monitor his playing time and in-season responsibilities when possible.

Those that call Curry “just a shooter” sound about as foolish as the critics that refer to Griffin as solely a dunker. After legitimate questions and concerns over what his actual position might be when he entered the league out of Davidson, Curry has clearly been a student of the game in the offseason and practice, as he has truly developed into one of the league’s more complete offensive point guards. His size makes him a bit vulnerable to the bigger points that can take him into the low block, but Curry has also progressed as an all-around defender over the past couple seasons as well.

While much of the early attention went to his fast-rising teammate Damian Lillard, Aldridge has been absolutely phenomenal throughout Portland’s (still) somewhat surprising 33-12 start. Always highly skilled, Aldridge has placed some distance between himself and some of the other power forwards in the league this season as a result of his continued development as a leader. There’s no true or unquestionable system of ranking players, but there is no doubt Aldridge has established a firm position within this discussion.

It almost feels like sacrilege to say a player putting up those numbers has been guilty of “coasting” at times this year, but that is precisely the case. It must be nice to be that good, but that just goes along with the incredible expectations that develop when you are the league’s marquee player. Not to fault James, or his teammates, as they all realize pushing for regular season awards and streaks wouldn’t be in their best interest. They also realize how weak an overwhelming majority of the conference has been, which makes it even less important to go all-out in January. It’s also pretty exhausting to play in three straight NBA Finals, which means a significantly shorter offseason than their peers. With that said, we expect a furious second-half push from James and the rest of the HEAT if healthy and still within striking distance of the Pacers.

George hasn’t eclipsed James as a player, but his progression and consistency for the Pacers has made it impossible to not acknowledge his productivity. Unlike some of the players in the general MVP discussion, perhaps the best part of George’s game goes unappreciated by those that merely look at statistics. While steals and blocks are key, George is arguably the league’s best perimeter defender at this point. His length and quickness make him tough on the outside, while his strength and agility have made him an effective defender on the block for the cases when other swingmen attempt to post him up.

Question the position all you’d like, but the fact is Durant has played the best and most consistent basketball through nearly 50 games. We still have another 37 games remaining, but if he is able to maintain this level of productivity through April you should anticipate those with votes to reward the effort. Especially, when you factor in Russell Westbrook’s uncertain status. Durant’s scoring totals since the first of the year include 54, 48 (twice), 46, and 41 points, including a current streak of 11-consecutive games with 30+ points.

Chris Paul, Los Angeles Clippers – Obviously, Chris Paul has played like a true MVP candidate thus far. Not to worry, he’ll be right back in the discussion as soon as he returns to action.

Carmelo Anthony, New York Knicks – It truly has been a shame that his Knicks simply haven’t been able to compete in a weaker conference this season. Anthony is having a fantastic season, has been the team’s lone bright spot and is putting up some of the more impressive scoring totals while rebounding like a madman. He absolutely deserves to be in the general discussion, but may ultimately be a casualty of his team simply not being very good if the Knicks don’t turn it around.

Goran Dragic, Phoenix Suns – Much of the early-season credit and attention understandably went to his backcourt mate Eric Bledsoe. Even though Dragic has been very good all year, he’s been even better and more productive in Bledsoe’s absence due to injury. They’ve maintained their surprising start, and have already won more games (26) through 44 games than they did through 82 in 2012-13.

DeMar DeRozan, Toronto Raptors – DeRozan has been the best and most consistent player on the Eastern Conference’s fourth-ranked team. Regardless of whether the conference is historically bad (which it is), he deserves the acknowledgement.