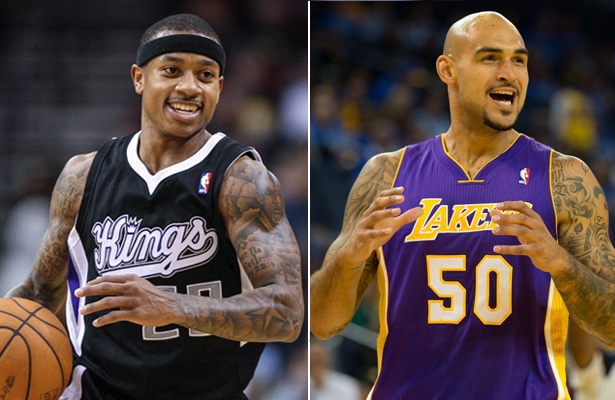 In most years, the final pick in the NBA Draft never plays significant minutes in the league. Mr. Irrelevant is usually just that, someone who gets to hear their name on draft night and then fade into obscurity shortly after.

Looking back on drafts from the last decade, there are plenty of No. 60 picks who fit this description – players like Milovan Rakovic, Rashad Wright, Andreas Glyniadakis, Corsley Edwards and many others.

However, in recent years, players who were selected last on draft night have surprisingly ended up being contributors in the NBA. Three of the last six Mr. Irrelevants have played multiple years in the league.

Isaiah Thomas, who was Mr. Irrelevant in 2011, is obviously the best example, as he has become a key member of the Sacramento Kings’ young core while averaging 19.9 points, 6.3 assists and 1.3 steals. The Kings have brought in a number of other point guards – from Jimmer Fredette to Aaron Brooks to Greivis Vasquez – but Thomas has beaten out all of them to keep his starting job.

Robert Sacre, 2012’s Mr. Irrelevant, is in his second year with the Los Angeles Lakers and he has played in 32 games this season. Sacre has also started 11 games in his two years with L.A. The seven-footer from Gonzaga has exceeded all expectations, considering he was a long shot to make the Lakers’ roster.

Semih Erden, who played one season with the Boston Celtics and two seasons with the Cleveland Cavaliers, was Mr. Irrelevant in the 2008 NBA Draft.

Thomas and Sacre have used the Mr. Irrelevant label as motivation throughout their first few years in the league.

“I’ve always played with a chip on my shoulder and that just motivated me even more,” Thomas told me last year. “I went into every game thinking, ‘Okay, this team passed on me. They didn’t pick me.’ Every day, it was on my mind. I wanted to go out there and show them that they missed out on something special. I looked at other players and thought, ‘This guy was drafted ahead of me. I may not be better than him, but I’m going to outwork him.’ It made me work harder because I wanted to show the NBA and the world that I could compete on this level. I think I did an okay job of that … I’m always going to have doubters and I love proving them wrong. From day one, when I first picked up a basketball, I had doubters. They said I was too short. They said I wasn’t going to succeed in high school. They said I couldn’t duplicate that success in college. They said I couldn’t play in the NBA. I just laugh at it because I know that I’m working my butt off every single day to become the player that I am. I’m always going to have doubters. I use it as motivation to work even harder.”

“It motivates me every day,” Sacre said of being picked last in the draft. “Every day, I know that I can’t let up or take a day off. It wasn’t just given me, I had to work for every bit of it. It just motivates me every single day to come in and do my job.”

Thomas and Sacre both realize how fortunate they are to be in the league. While they worked hard to get where they are, they understand that they easily could’ve been waived in training camp several months after being drafted, as most Mr. Irrelevants are. Sometimes, it’s just about numbers and it doesn’t matter how a player has performed or how hard they worked. Thomas made the Kings even though Sacramento had drafted another point guard in the lottery (Fredette) and Sacre made the Lakers even though he was the squad’s lone rookie and the team was expecting to contend with Kobe Bryant, Dwight Howard, Pau Gasol and Steve Nash.

“I’m very fortunate to be in this situation,” Sacre said. “There are only 450 of us in this league so if I can be one of those guys then I’m very grateful. It’s been great being a Laker. I’m fortunate to be part of an organization with such great history. To be able to play here, it’s an amazing deal. It’s been awesome. I feel like I’m part of a team that has a lot of tradition. And with the vets that we have, I can always learn from them.”

Being the final pick in the draft isn’t fun, because there’s no guaranteed money and the player is often viewed as expendable by the team. In fact, by the time the last few teams are selecting on draft night, most agents are actually hoping that their client doesn’t get picked so that he can go undrafted and choose the best situation as a free agent. That gives the player some control and they can go to a team that doesn’t have a logjam at their position.

For Thomas, he had to overcome even more obstacles because he also had the lockout to deal with.

Players like Thomas, Sacre, and Erden managed to overcome those obstacles to stay relevant for far longer than anyone expected.

After struggling early in the season and sitting near the bottom of the standings, the Memphis Grizzlies have emerged as one of the hottest teams in the NBA.

Memphis has won four straight games and nine of their last 10 contests, with victories over the Portland Trail Blazers, Houston Rockets (twice) and Oklahoma City Thunder among others. The Grizzlies are now just a half game out of the eighth seed in the Western Conference with plenty of time left in the season to continue climbing the standings and once again solidify themselves as a contender in the West.

It took some time for the Grizzlies to start winning, which is understandable since they’ve spent the early part of the season adjusting to a new head coach in Dave Joerger and a number of new players including Mike Miller, Kosta Koufos, Courtney Lee, James Johnson, Nick Calathes and Jamaal Franklin. Now, it seems like everyone is on the same page in Memphis, and they’ve started to see results.

“The demeanor and the focus are at a high level right now,” Lee said following the team’s road win over the Blazers. “We’re going into every game telling ourselves we’re going to win the game. We just need to go out there and execute on both ends and we’ll get the win.”

“I’ve been very happy with our focus in practices and shootarounds and preparation for the game,” Mike Conley said. “So it’s spilling into the first quarters, second quarters, and it’s giving us a good start to games that we haven’t had in the last couple months.”

It’s also no coincidence that the Grizzlies immediately started playing better once Marc Gasol returned from injury. Gasol is extremely important to that team on both ends of the floor, and his absence only confirmed that. The team’s defense improved significantly with Gasol, the reigning Defensive Player of the Year, back on the floor. They’ve been dominant on that end of the floor recently. Memphis has won their last five road games, holding each of their opponents below 90 points. That’s the longest such streak in franchise history, according to the Elias Sports Bureau. Gasol also makes a huge impact on the offensive end by scoring, passing and drawing defenders. The team really missed his contributions during the 23 games that he was sidelined.

Conley has done a fantastic job this season as well, averaging a career-high 18.2 points, 6.3 assists, 2.6 rebounds and 1.5 steals. Conley is a key cog for Memphis and has been getting some All-Star buzz. If he played in the Eastern Conference, he’d likely be an All-Star lock. But that’s not the case in the West where he has to compete with Chris Paul, James Harden, Damian Lillard and Tony Parker among others, all of whom are in the mix to be reserves. Joerger has praised Conley all year, calling him “absolutely fantastic” and saying that he is one of the best floor generals in the NBA.

“I like my guy,” Joerger said of Conley. “I won’t say anything about anybody else’s guy, but I love our point guard.”

“He’s a complete player,” Lillard said of Conley. “He can shoot outside, he can attack the basket, he can go left, he can go right and he’s quick. He knows the game and his team screens for him, so that makes him a tough guard.”

No team will want to run into the Grizzlies come playoff time. Despite their early struggles, they’re still a tough out due to their swarming defense, balanced attack and ‘grit-and-grind’ physicality.

They certainly haven’t been fun to play over the last three weeks.