What on earth is going on with Indiana Pacers center Roy Hibbert? How can a player go from being a productive All-Star to a complete liability so quickly?

Watching the playoffs, it’s easy to forget that Hibbert was an All-Star this year and the runner-up in Defensive Player of the Year voting. He was a big reason why the Pacers were dominant for much of the season, finishing with the best record in the Eastern Conference. Hibbert is the highest-paid player on Indiana’s roster, earning $14,283,844 for the 2013-14 season and serving as the team’s anchor for most of the year.

But over the last few months, Hibbert has looked like a completely different player. He has become a liability on both ends of the floor for the Pacers, struggling so much that head coach Frank Vogel has cut his minutes in favor of Ian Mahinmi in the postseason.

Through eight playoff games, Hibbert is averaging 4.6 points, 3.3 rebounds, 1.4 blocks and 3.4 fouls. In three of the games, the 7’2 center didn’t score a single point. In two contests, he didn’t grab a single rebound.

Initially, Hibbert’s struggles were attributed to the bad matchup against the Atlanta Hawks in the first round, since their big men stretched the floor and brought him out of the paint. However, this didn’t explain his struggles on the glass or the offensive end, and the issues continued in Game 1 against the Washington Wizards when Hibbert recorded zero points, zero rebounds and five fouls.

Hibbert has described this as the worst slump he has ever faced and he has been trying to bounce out of it for awhile. He has talked with coaches, had a locker-room meeting with veterans David West and Rasual Butler and watched film in an effort to figure out why he has been so ineffective.

“I talked with the coaches and it’s the small details [that I need to fix],” Hibbert said. “I’m going to get too much into that right now, but I’m going to change my game plan up a little bit. … I got to come out and be aggressive. I got to be a different Roy Hibbert than I have been.”

Hibbert’s teammates are frustrated that he’s struggling at the most important time of the season, and made it clear that he needs to step up in order for the team to achieve their goals.

“We need him now,” Paul George told the Indianapolis Star. “I have faith that along the way he’s going to find himself. But we’re at the point where we’re really going to need Roy and we really need him now.”

It seems that Hibbert is letting his lack of touches on offense affect his effort and production on the glass and defensive end. At 7’2, he should always be able to impact a game with his rebounding and defense, even if he’s not very involved on the offensive end. Earlier this season, Hibbert was upset about his lack of shots and criticized his teammates by calling them “selfish.” Now, it seems he realizes he should just focus on making his presence felt without the ball in his hands.

“I’m just going to try to be more aggressive on both ends, and not being content with letting all of our guards and forwards get all of the defensive rebounds,” Hibbert said. “I’m going to try to go a good job of putting a body on Nene and [Marcin] Gortat. I just need to go out there and pursue rebounds. … I think the most important for me is play aggressive and stay out of foul trouble.

“The offense we have and the players we have are more outside [oriented], guys who are outside shooters, and they play at a high level. They take it upon themselves to go inside and out, but whenever I am called on to make a post move, I’ll try to be as efficient as possible.”

With his recent struggles, Hibbert has been criticized by fans and media. He has become a punch line on social media, where fans have mocked his awful stats. Even former NBA players like Tracy McGrady and Gilbert Arenas got in the mix, criticizing his zero-point, zero-rebound performance in Game 1.

“Roy knows it,” George told USA TODAY Sports. “He’s getting a lot of criticism from every media outlet, so he’s aware of what’s going on and that his play needs to improve for us to really advance deep in the playoffs. Now, Roy’s just got to come through and deliver. … It’s a mindset. He’s got to clear his mind, demand the ball in the paint and get the ball where he wants it.”

Recently, a rumor circulated on gossip sites that Hibbert’s struggles were due to a teammate having an inappropriate relationship with the center’s fiancé. However, Hibbert’s teammates were quick to shoot down that rumor. George posted on Instagram that the “rumors have got to stop” and called anyone who believes them “ignorant.” Other teammates told the press that the rumor was ridiculous.

“You guys keep making up stories,” George Hill told the Indianapolis Star. “[We’re] just trying to focus, letting Roy know that through all this B.S. going on and rumors and all that, we’re brothers. None of that is happening. This locker room is a tight group, we’re going to continue to be there for each other through the rumors and all the people that’s trying to break it apart.”

Whatever is wrong with Hibbert, he needs to figure it out soon if Indiana wants to advance to the Eastern Conference Finals, especially since the Pacers just ruled Andrew Bynum out for the playoffs and excused him from the team. The timing of this slump is horrible for Indiana, and they need their big man to return to form sooner than later.

Tuesday afternoon was a great day for Oklahoma City Thunder forward Kevin Durant. Not only did he win the 2013-14 Most Valuable Player award – the first MVP trophy of his career – he also was named as the cover athlete for NBA 2K15. 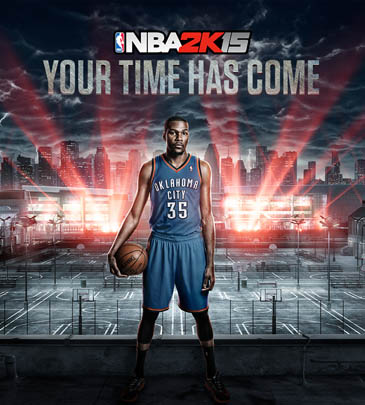 “Being an NBA MVP is an achievement that is a testament to the people that I have in my life – coaches, teammates,” Durant said. “It means the world to me because it solidifies you as one of the best to play the game, and it was always one of my goals. But to be the NBA 2K15 cover athlete is just as important to me because this game is so authentic to who I am as a person. It’s brought me and my family together so much, as a group just enjoying the competition of a video game. Even though it is a video game, it has brought so much joy in our lives. It’s just a blessing to be a part of it, and it’s something that I’ve been longing for for awhile, and I’m just grateful for the opportunity.

“I begged them to put me on the cover because I really think nobody plays the game as much as I do. It is just so authentic to me, and I wanted to be a part of it. I knew I had to perform on the court in order for me to get recognized or just to be in the running for it, so I just tried to do my best and let my game do the talking and it was great that we partnered up and I’m able to be on the cover. Being one of the cover athletes is one of the things I’m never going to forget; it’s a special moment. … So many great players dating all the way back to the Chris Paul’s, Kevin Garnett’s, Kobe Bryant’s, Michael Jordan’s, those guys that have been on the cover so it feels great.”

2K Sports made the announcement on Tuesday afternoon. 2K15 is expected to go on sale in October.

Durant is having his best season as a pro, averaging 32 points, 7.4 rebounds, 5.5 assists and 1.3 steals while shooting 50.3 percent from the field and 39.1 percent from three-point range. He led the NBA in scoring for the fourth time in five years and was named to the All-Star team for the fifth time in his career.

The 25-year-old easily won this year’s MVP award, totaling 1,232 points, including 119 of 125 first-place votes. The runner-up, LeBron James, had just 891 points and six first-place votes. James had won the MVP trophy for the last two years, and four times in the last five seasons.

“I think it was so meaningful because I never let anybody tell me that I wasn’t worthy enough to get an MVP,” Durant said of winning the Most Valuable Player trophy. “I just kept fighting, kept pushing, kept believing in myself and so many people believed in me that I could be the MVP one day, ever since I was kid. I just had that confidence in myself. I always believed that I worked so hard every day and I think that’s why it’s special, because I had to fight to get it. It wasn’t given to me out of sympathy or because they were tired of giving it to somebody else. I really wanted to go take it.”

Now, just as Durant took the MVP trophy from LeBron James, he will take this year’s 2K cover from the Miami HEAT superstar, who was on the cover of NBA 2K14.