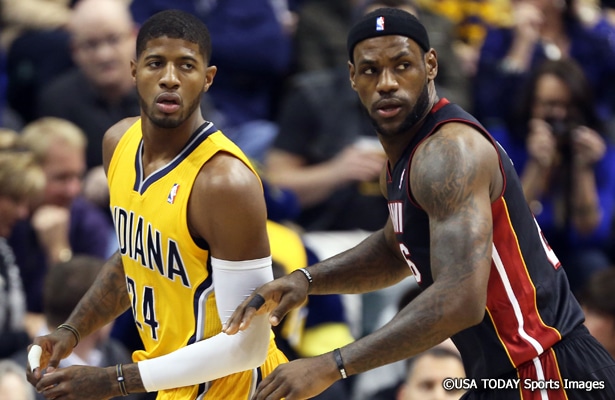 Now that every NBA team has played roughly 55 games and the trade deadline has come and gone, we have a pretty good idea of what every roster will look like going forward and which teams are legitimate contenders. In my opinion, there are six teams that have a realistic shot at playing into June.

Before the season started, teams like the Chicago Bulls, Brooklyn Nets and even the New York Knicks to some extent were being mentioned as possible contenders in the East, but the conference has been a colossal disappointment to the point that it would be absolutely astonishing if a team other than the Indiana Pacers or Miami HEAT represented the East in the NBA Finals. Indiana and Miami have the league’s best records, and then there is a huge drop off. The current third seed, the Toronto Raptors, would be ranked 10th if they played in the Western Conference. Only five teams in the conference are above .500 and the league’s three worst records belong to teams in the East.

In the West, many early predictions had the Memphis Grizzlies and Golden State Warriors as contenders. However, neither team has played as well as expected this season, with both squads currently battling for one of the final playoff spots in the competitive conference. Injuries and adjustments have contributed to their struggles, and it’s certainly possible that Memphis or Golden State could go on a deep postseason run if they’re able to secure a playoff berth. However, it seems these teams are currently a notch below the West’s four legitimate contenders. The Portland Trail Blazers have been a pleasant surprise during the regular season and they may continue to shock everyone in the playoffs, but their lack of postseason experience keeps them from joining my list below.

Without further ado, here are my legitimate contenders:

Indiana Pacers – This could be the year that the Pacers finally advance past the HEAT to reach the NBA Finals. Indiana is ridiculously talented and deep. Acquiring Evan Turner from the Philadelphia 76ers made a stacked team even better, and it’s easy to imagine the Pacers hoisting the Larry O’Brien trophy. They have a two-way superstar in Paul George, one of the game’s best up-and-coming shooting guards in Lance Stephenson, an interior presence capable of dominating in Roy Hibbert, a consistent post scorer in David West and a fantastic head coach in Frank Vogel. Not to mention, Indiana has the deepest frontcourt in the NBA since behind Hibbert and West they have Luis Scola, Andrew Bynum, Ian Mahinmi and Lavoy Allen. The Pacers are extremely hungry, and they want more than anything to keep Miami from reaching the NBA Finals for a fourth straight year. Indiana has assembled a juggernaut that should go deep into the playoffs, and this team is definitely capable of winning it all. Hollinger’s Playoff Odds at ESPN.com give Indiana a 17.2 percent chance of winning the championship, which are the best odds in the NBA.

Miami HEAT – The HEAT are the two-time champions for a reason, and a three-peat is definitely possible. Miami has played very well this season and trail the Pacers by just two games, despite the fact that they have rested Dwyane Wade throughout the season (he has played in 39 of 54 games) and limited the minutes of other key players. The HEAT will likely enter this postseason healthier and better rested than in previous years, which is a scary thought for the rest of the league. Saving Wade for the postseason is a smart move for Miami, and he has reminded everyone just how good he is when healthy with some big performances in the past month. Oh, and they have LeBron James, who is capable of putting the team on his back and delivering jaw-dropping performance after jaw-dropping performance in the playoffs. Hollinger’s Playoff Odds at ESPN.com give Miami a 16.2 percent chance of winning the championship, which are the second-best odds in the NBA.

Los Angeles Clippers – The development of Blake Griffin and DeAndre Jordan puts the Clippers this high on the list. Griffin and Jordan are playing the best basketball of their careers and if they continue to produce at this level, L.A. will be a very tough out in the playoffs. It also helps that the Clippers have the NBA’s best point guard in Chris Paul and one of the league’s top head coaches in Doc Rivers. They also have one of the best benches in the league led by Sixth Man of the Year favorite Jamal Crawford, and they still aren’t done adding talent (Glen Davis just signed and Danny Granger may be next). The excuses that the Clippers could fall back on in the past are gone – coaching is no longer holding this squad back and the team isn’t too young or inexperienced. The Clippers have positioned themselves to be contenders for years to come, but the time to start winning is now. Hollinger’s Playoff Odds at ESPN.com give Los Angeles a 15.7 percent chance of winning the championship, which are the third-best odds in the NBA.

Oklahoma City Thunder – The Thunder are struggling as of late, dropping their last three games, but they still have the West’s best record. This team is so talented that they’re expected to go deep in the playoffs, and it wouldn’t surprise anyone if they ended up in the NBA Finals again for the second time in three years. Kevin Durant somehow finds a way to improve every season, which is remarkable, and he’s now entering his prime. This may be the year that he snatches the MVP trophy out of LeBron James’ hands; will he pry the Larry O’Brien trophy from James’ grasp as well? With the way Durant has elevated his game this season, it’s difficult to bet against him. The team is currently adjusting to having Russell Westbrook back in the lineup, but they should be fine by the time the playoffs start. Reggie Jackson and Jeremy Lamb have been thrust into significant roles this season, and Oklahoma City will need them to step up in the postseason. Hollinger’s Playoff Odds at ESPN.com give Oklahoma City a 14.5 percent chance of winning the championship, which are the fourth-best odds in the NBA.

Houston Rockets – Had this list been assembled several weeks ago, Houston may have been left off. However, the Rockets have been one of the most impressive squads in the entire league since the calendar flipped to 2014. The team has won 18 of their last 24 games, and they have the sixth-best winning percentage in the NBA. Since they’ve elevated their game, there have been times when they looked unbeatable. James Harden and Dwight Howard are both playing at an extremely high level, and the adjustment period that the team had to go through early in the season as they got everyone on the same page and integrated Howard seems to be over. Houston can beat teams inside and out, and their ball movement, spacing and balance have improved as the team has developed chemistry. The Rockets’ best basketball is likely a year or two away given their youth, but they’re still a legitimate contender this season. Hollinger’s Playoff Odds at ESPN.com give Houston an 8.7 percent chance of winning the championship, which are the fifth-best odds in the NBA.

San Antonio Spurs – The basketball world should know better than to count out the Spurs. As long as Gregg Popovich and R.C. Buford are running the show, San Antonio has a shot to win the title. The Spurs have had to deal with a number of injuries this season, which has slowed them down a bit, but they’ll find a way to compete come playoff time. Popovich has done a good job limiting the minutes of his key contributors – Tim Duncan, Tony Parker, Kawhi Leonard and Manu Ginobili. Remember, this team was seconds away from defeating the HEAT last year in Game 6 of the NBA Finals. If Ray Allen’s feet were just a little bit larger, San Antonio is likely the defending champs right now. The Spurs are too talented and too well prepared to be overlooked. They rarely makes mistakes, and Popovich ensures that they won’t beat themselves. It takes a very, very good team to eliminate the Spurs from the playoffs. Hollinger’s Playoff Odds at ESPN.com give San Antonio an 8.1 percent chance of winning the championship, which are the sixth-best odds in the NBA.

Which team has the best chance at winning it all, in your opinion? Leave a comment below.

Earlier this afternoon, the NBA announced that Sacramento Kings center DeMarcus Cousins has been suspended one game without pay and fined $20,000 for his actions in separate incidents.

Cousins was suspended for punching Houston Rockets guard Patrick Beverley in the stomach with 9:44 remaining in the first quarter of the Kings’ 129-103 loss to the Houston Rockets on Feb. 25, at Sleep Train Arena. Here is video of the punch:

Cousins was fined for verbally abusing a game official and failing to leave the court in a timely manner following his ejection with 8:21 remaining in the third quarter of the same game. Here is video of the incident:

Cousins will serve his suspension on Friday, Feb. 28, when the Kings visit the Los Angeles Lakers at Staples Center.