NBA PM: Will Stars Bolt for the Eastern Conference?

When the Chicago Bulls held their free agency meeting with Carmelo Anthony last July, part of the franchise’s pitch focused on the Eastern Conference being wide open and how the star-studded Bulls could be a perennial contender in that landscape. They wanted to stress to Anthony that playing in the NBA Finals year after year could be a reality with Chicago’s talented roster and relative lack of competition, whereas making an annual title run would be much more difficult if he joined one of the Western Conference teams pursuing him.

Anthony, of course, re-signed with the New York Knicks. Then, the Cleveland Cavaliers added LeBron James and Kevin Love to become the clear-cut frontrunner in the East. Still, it remains true that the Eastern path to the Finals has significantly fewer obstacles than the Western route.

Players recognize this too, so don’t be surprised to see a number of middle-to-upper-tier players move from the West to the East through free agency or trades in the near future. Other things will obviously factor into players’ decisions too – such as the money, city, weather, playing time and much more. But all things being equal, East teams may be more attractive given how insanely competitive the West has become.

A number of players and agents who spoke to Basketball Insiders on condition of anonymity admitted as much.

“Players will consider going to the East, for sure,” one Western Conference player told Basketball Insiders. “The East is down right now and the West is a dogfight. The seventh- or eighth-seeded team in the West could possibly make the Eastern Conference Finals with how things are now.”

“It wouldn’t be a bad idea [to join an East team],” added another NBA player. “I’m pretty sure Kevin Durant is going to start it off and go home to [the Washington Wizards in] D.C.”

That’s obviously just speculation about Durant (although it is a popular theory these days), but it’s easy to see why any player might want out of the West.

In the East, two teams made the playoffs with a losing record (the Boston Celtics and Brooklyn Nets), while a 45-win team (the Oklahoma City Thunder) missed the postseason in the West. If the eighth-seeded Nets were in the West, their 38-44 record would’ve ranked 12th (or, in other words, fifth-worst in the conference).

For much of the season, the Cavaliers were expected to win the Eastern Conference and face little resistance along the way. That’s exactly what happened, as Cleveland swept two of their three East opponents and lost just two games before advancing to the NBA Finals. Oh, and they did this with Kevin Love out for the postseason, Kyrie Irving sidelined for some games and playing through pain in others, and LeBron James hobbling around the court as well. That sums up the East’s ineptitude.

By the way, Cleveland was the second seed in the East with their 53-29 record, but they would’ve been the seventh seed and faced the Rockets in the opening round if they played in the brutal West.

The analytics website numberFire uses the metric “nERD” to measure team performance based on statistical analysis. nERD assigns teams a rating on a scale of 0-100, with 50 being the league average. This season, West teams had an average nERD of 53.90 compared to 46.24 for East teams. Looking at just the playoff teams, the West’s top eight had an average nERD of 64.39 compared to 54.46 for the East’s postseason squads. In 13 of the last 14 years, the West has had a higher average team nERD than the East (with 2009 being the lone exception). 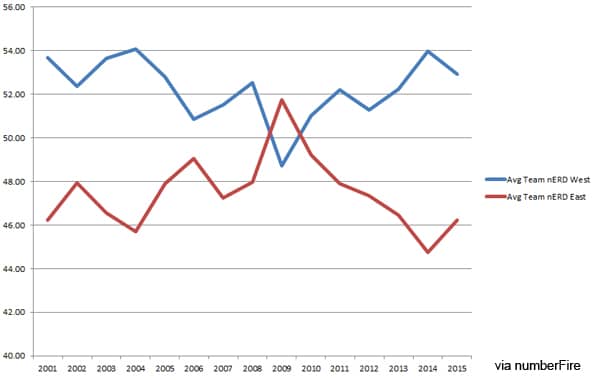 There’s also the fact that the West has many more stars. Yes, the East has LeBron James, who’s arguably the best player on the planet, as well as John Wall, Carmelo Anthony, Paul George, Derrick Rose (when healthy) and Dwyane Wade (although he’s clearly declining) among others. But take a look at this year’s NBA end-of-season awards and it’s pretty clear which conference has more star power.

In the voting for the two All-Defensive teams, eight of the 10 players honored were from the West: Kawhi Leonard, Draymond Green, DeAndre Jordan, Tony Allen, Chris Paul, Anthony Davis, Andrew Bogut and Tim Duncan. Jimmy Butler and John Wall were the lone East players who were honored.

This doesn’t even include other West household names such as Kevin Durant, Kobe Bryant, Dwight Howard, Damian Lillard and Dirk Nowitzki among others. And let’s not forget that the West’s pool of stars may continue expanding in a few years, as 2014-15 Rookie of the Year Andrew Wiggins continues to develop and Karl-Anthony Towns and Jahlil Okafor could join the conference since the Minnesota Timberwolves and Los Angeles Lakers have the top two picks in the 2015 NBA Draft.

The difficult road to a championship is an understandable reason for a player to switch conferences, but the number of stars could influence that decision too. It’s harder for a player to build their brand or earn individual accolades (which often trigger contract bonuses) when they’re surrounded by so many star-caliber players. One agent who has prospects in the 2015 NBA Draft is privately hoping his clients don’t end up out West for this very reason.

“Players absolutely want to be in the East,” said one NBA agent who asked to remain anonymous. “[The conference disparity] affects the All-Star teams too. I want my kids in this year’s draft to get selected by Eastern Conference teams.”

Also, with the NBA’s salary cap set to rise significantly next summer due to the new television rights deal, just about every team will have substantial cap space. That means players will have plenty of options to team up in the East if that’s where they’d like to go. Some star players have already casually discussed the possibility of forming a new super-team together once the cap rises, according to league sources, and it’s possible that squad could decide to assemble in the East for strategic reasons.

Even though we could see some notable players cross the country in the near future, don’t expect a mass exodus from the West. As one player noted, that wouldn’t solve anything.

“I could see players leaving the West, but not if too many stars to go the East,” said the player, who has played in both conferences. “If too many stars switch, then the East is really tough and you have the same problem. Personally, though, I believe the top 16 teams should be in the playoffs instead of going by conferences.”

This idea to ignore the conferences and just allow the teams with the best records into the postseason has been discussed by NBA Commissioner Adam Silver and it seems that he’s strongly considering it.

“Ultimately we want to see your best teams in the playoffs,” Silver recently said to Comcast Sportsnet Bay Area. “And there is an unbalance and a certain unfairness. There is a proposal… where the division winners would all automatically go into the playoffs and then you’d seed the next 10 best teams. I think that’s the kind of proposal we need to look at. There are travel issues, of course, but in this day and age every team of course has their own plane, travels charter. I don’t think the discussion should end there. And as I’ve said, my first year I was studying a lot of these issues and year two is time to take action. It’s something I’m going to look at closely with the competition committee. I do think it’s an area where we need to make a change.”

It’s worth noting that not all agents believe quality players will start fleeing Western Conference teams due to the competition from both teams and individuals. This agent feels that, in most cases, players are much more concerned about themselves when they’re weighing their free agency options (and several other league sources echoed this sentiment as well).

“I think players will always go where they can personally benefit the most,” said one NBA agent, who spoke off the record. “They’ll focus on what’s best financially first, and then on basketball second. Even if the money is equal, I think they’d go to the team where they can play the most. I think money and playing time will always impact a player’s decision more than whether they’re in the East or West. The one exception is the veteran who has money and is chasing a ring; I could see him favoring East teams.”

One executive pointed out that we may not see players make the switch from the West to the East until LeBron James retires. James has now been to five straight NBA Finals, so while there are fewer contenders at the top of the East, getting past James is very difficult (just ask the Bulls).

At the end of the day, factors like the money, city, market size, playing time, weather, management, teammate relationships and lack of state income tax will always impact a player’s move.

However, it’s possible that a team’s conference could play a role (even if it’s just a slight one) in the decision-making process going forward. Just as the Bulls brought it up in their pitch to Anthony, teams that are looking for any possible edge in recruiting will certainly include this among other things as they attempt to land free agents.