No matter how many games the Atlanta Hawks win or how impressive they’ve looked throughout this season, it seems like they never get the credit that they deserve. Each week, I do a number of radio shows around the country and by far the most common questions I’ve been asked this season is, “Are the Hawks actually a legitimate contender?”

People doubt that this team is for real. They wonder if their style of play can work in the postseason. They question if they can really win a championship without a superstar. They consider their regular-season record to be somewhat of a fluke. 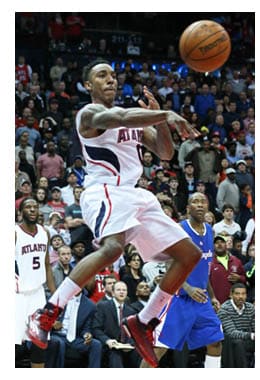 This is strange, considering the Hawks’ success certainly seems sustainable. They are an unselfish team that has extraordinary chemistry. They are excellent at moving the basketball, passing up good shots for great shots. They are very efficient, constantly finding the open man and making the right play. Head coach Mike Budenholzer has done a terrific job getting his players to buy into his system and execute it to perfection. Watching this Atlanta offense when it’s clicking is beautiful, unlike the Hawks’ offenses of years past that featured bad shots and isolations that sometimes lasted entire possessions.

There’s a reason why this year’s Hawks team has been called the Spurs of the East, which is the ultimate compliment a basketball team can receive. While they aren’t exactly like San Antonio, the comparison makes sense, especially when you see the Hawks whipping the ball around, finding the open man and making efficient shots. Other similarities are that every player knows exactly what their role is, executes their job and minimizes mistakes so that they aren’t a team that beats themselves.

The Spurs-esque style is no coincidence, as Budenholzer spent 18 years with San Antonio before becoming the Hawks’ head coach. Budenholzer has also been resting his starters lately to save them for the postseason and give his reserves valuable minutes that could pay off down the road, which would make Gregg Popovich proud.

Not only does Atlanta have a great offense, they’re a strong two-way team that ranks in the top eight on both ends of the court. They are sixth in offense (scoring 106.5 points per 100 possessions), and they are eighth in defense (allowing just 101 points per 100 possessions). The only other teams that rank in the top eight in both categories are the Golden State Warriors and those similar Spurs, so they’re definitely in good company. The Hawks’ numbers on both ends were even better until recently, when Atlanta started coasting a bit and resting players.

One popular criticism of the Hawks is that they don’t have a star, which is even stranger to hear now that they had four players selected to the All-Star game (Al Horford, Paul Millsap, Jeff Teague and Kyle Korver). Yet doubters continue to ask, “Who is their go-to player? Who would hit a game-winning shot with the game on the line?”

While this is viewed as a weakness, one could just as easily make the case that this is actually one of Atlanta’s strengths. Because they have so many weapons, they aren’t overly reliant on one player. Whereas some teams can be easily beaten by containing one individual, Atlanta is much harder to slow down and game plan against because they have an arsenal of offensive weapons.

The Hawks’ scoring attack is extremely balanced. They have five players who average over 12 points per game, with their leading scorer (Horford) averaging just 16.8 points. And in addition to those five top scorers, they have seven other players averaging between 5.2 and 10 points. Teams never know which combination of Hawks will beat them, because their top performers change from night to night.

“They’ve got five guys on the court, almost all the time, that can score and have to be handled and can’t be left alone,” Popovich said of the Hawks. “You can’t come off one guy and go help any way you want. They’ve got threats on the floor everywhere.”

Those threats all over the court come in handy during late-game situations. While some people wonder who will be the Hawks’ go-to scorer in a clutch moment, the truth is that just about any Hawk can make a game-winner. The league is going away from inefficient hero ball, with a common belief being that it’s better to have multiple shooters capable of hitting the game-winning shot rather than one star who’s going to force up an attempt regardless of the circumstances. The Hawks’ specialty is making the smart play and finding the open man for an efficient shot, which works just as well in late-game situations. And not knowing who will get the ball, again, makes it harder to stop the Hawks as they go for the win.

It’s true that lately the Hawks haven’t been playing their best basketball, and detractors point to this as evidence that the team isn’t as good as their record indicates. After a perfect January in which they won all 17 of their games (and had their entire starting five named the Eastern Conference “Player” of the Month), the Hawks have come back down to earth a bit.

These critics mention that Atlanta has lost seven games in March, focusing particularly on their losses to non-playoff teams like the Philadelphia Sixers, Denver Nuggets, Charlotte Hornets and Detroit Pistons. However, it’s important to note that the Hawks clinched a playoff berth on March 3 and have been the top seed in the Eastern Conference for almost the entire season. For much of the year, the second-seeded team in the East has been more than 10 games back from the Hawks.

It’s not a big surprise that they’ve gotten a bit complacent and have focused on being rested and 100 percent healthy for the playoffs. Atlanta’s excellent play early in the season gave them a nice cushion, which has allowed them to coast and do everything they can to ensure that they’ll be at their best come playoff time. As previously mentioned, there have been some games where Budenholzer pulls a Popovich and rests or significantly limits his starters, so it’s not worth overreacting to their recent losses. Losing Thabo Sefolosha for the rest of the season due to a broken ankle is a tough blow, but this a deep team that should be able to withstand that.

The Warriors have taken a similar approach to the final stretch, with head coach Steve Kerr stating that winning late-season games isn’t anywhere near as important as being fresh and prepared for their playoff run (and one Warriors player apparently admitting to Anthony Davis that the team was treating their Tuesday game against the New Orleans Pelicans “as a scrimmage”). Golden State is in the midst of a two-game losing streak, but there’s no reason to panic, just as there’s no reason to worry about Atlanta.

The Hawks will be fine. They’re an unselfish team plays a winning brand of basketball, trusting each other and putting the team’s success over their own. At times, much like the Spurs, they look like a well-oiled machine because their players are so in sync and well-prepared that they seem one step ahead of the opposition. This is a Hawks team that is hard to game-plan against, especially in a seven-game playoff series since Budenholzer is a great coach who can make adjustments and this team has so many talented players to account for.

Not to mention, playing in the East is a big advantage for the Hawks, since their route to the NBA Finals should be easier than any of the contenders out West. Whichever team represents the East in the Finals should be more rested than their West counterpart, who will likely have had several long, grueling series against very good teams.

To answer the question that I keep being asked, yes, the Hawks are a legitimate contender. They have a real shot at hoisting the Larry O’Brien trophy, and they’d love to do just that to silence their doubters and prove their critics wrong.

Tension Between Green and the Suns

The relationship between Gerald Green and the Phoenix Suns seems to be souring.

This all started when Suns head coach Jeff Hornacek explained that Green’s playing time has diminished because of his poor play on the defensive end. He was pretty critical of the 29-year-old swingman, even saying that teammates have complained about Green’s help defense.

“He never really seemed to get it going [offensively] and then it comes to the point where, if you’re not scoring and if your defense isn’t picking up, it’s hard to stay in the game,” Hornacek said, according to The Arizona Republic. “The next guy is going, ‘I needed help here and the guy wasn’t here.’ We’re trying to develop something for the future, not just being out here for everybody to play in the game. We want to get to a top-notch winning level and you’ve got to do it on both sides.”

In response, Green said he wants to stay in Phoenix long-term, but isn’t sure the feeling is mutual.

“I just don’t know if they want me here,” Green said. “Because if you want somebody, you show them. I didn’t think I was playing that bad and now we’re here.”

Now, Green’s agent, Kevin Bradbury of BDA Sports, is entering the mix. He defended Green and ripped Coach Hornacek for making those comments.

“It’s completely unfair to misrepresent Gerald and his game like this,” Bradbury told Sporting News. “You’re talking about a player that wants to win at any cost and is a tremendous locker guy and teammate. I don’t see the benefit for the coach to go about things this way. … The numbers show pretty clearly that Gerald is not the terrible defensive player he is being made out to be. The Suns played him a lot last year, they liked what he brought, when he was rolling, the team was rolling, and no one was out there complaining about his defense.

“It’s unfortunate because the team isn’t where some people thought it would or should be at this point in the season. I’m not sure why that falls on one guy all of a sudden, especially when they have known all along what they have with Gerald. He can score, and can score a lot quickly, when you give him the minutes. He brings it on the defensive end, consistent with what the team brings as a unit. But when you hear the coach saying he is so bad that he can’t be on the floor? That’s nonsense. You have to wonder where that comes from and why.”

Bradbury feels like the Suns are making Green the scapegoat for their disappointing season.

“They wanted him last year and they wanted [to keep] him at the deadline,” Bradbury said. “They didn’t have a problem with his defense, but now that they’re .500, his defense is a problem they can’t stop talking about.”

This is certainly a situation to keep an eye on. Green is in the final year of his contract with the Suns, making $3,500,000 this season. It’s sounding more and more likely that the two sides will go their separate ways this summer when Green is an unrestricted free agent.