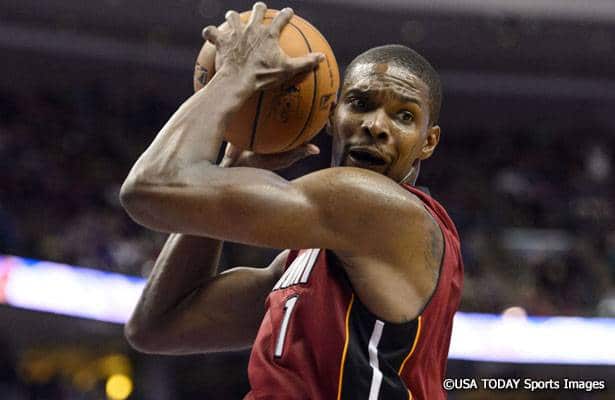 Le Batard asked whether Bosh—who can opt out of his contract after this season—will be in Miami next year.

“And so will LeBron…,” Le Batard continued.

via Ethan Skolnick of Bleacher Report

For those of you who didn’t hear Dan Le Batard’s interview with Chris Bosh, he played a “true or false” game with the Miami HEAT big man and asked several questions. The final questions were if he and LeBron James would be in Miami next year, to which Bosh responded “true” and “true.”

As Skolnick points out in his article, the interview was lighthearted and Bosh certainly wasn’t going to say “false,” as that would’ve been even bigger news. Bosh could’ve dodged the question or refused to answer, but that would’ve made headlines as well.

Answering “true” was really the best option for Bosh here. The question is whether he actually means what he said or if he was just trying to go with the least controversial answer since the HEAT don’t need any free agency distractions as they try to win their third consecutive NBA title.

If James, Bosh and Dwyane Wade want to stay in Miami past this season, they don’t have to exercise the early termination options in their contracts. Or, if they want to sign new long-term agreements with the HEAT, they can exercise their ETOs and ink new multi-year contracts with the organization.

Asked if this has been his toughest NBA season, Kaman said: “By far. Tenfold. … It’s unprecedented for me.”

This has been a rough year for Chris Kaman. When he signed with the Lakers last summer, he thought he was joining a playoff team that featured Kobe Bryant, Pau Gasol and Steve Nash. He also thought he’d have a significant role on the team.

Instead, the Lakers are 24-46, which is the second-worst record in the Western Conference, and Kaman has had the worst season of his career. He has only played in 35 games, mainly because Mike D’Antoni has left him out of the rotation on many nights, and he’s averaging just 10 points and 5.7 rebounds in 18.5 minutes.

Fortunately for Kaman, the contract he signed with the Lakers last summer was a one-year deal worth $3,183,000, so he won’t be stuck in this situation for long.

Considering Kaman and D’Antoni aren’t speaking, it’s safe to say that Kaman won’t be back with the Lakers next season if D’Antoni is still the coach. But even if the Lakers make a coaching change, it’s possible that Kaman bolts as a free agent. At 31 years old, he’s at the point in his career where he wants to play for a competitive team, not a rebuilding one. He has been miserable this season as the Lakers struggle, so it’s unlikely he’d stay and risk having to go through another losing season.

Tomorrow, the Sacramento Kings will sign former LSU Celtics, Blazers, Hornets and Timberwolves big man Chris Johnson. It is not known at this time whether it will be for the remainder of the season, multiple seasons, or a 10 day deal.

via Mark Deeks of Sham Sports

The Kings are expected to sign Johnson on Wednesday, but nothing is official yet. This season, Johnson played in China with the Zhejiang Guangsha Lions, averaging 20 points, 11.2 rebounds and two blocks.

Johnson, who is now 28 years old, last played in the NBA during the 2012-13 season, when he appeared in 30 games for the Minnesota Timberwolves. He averaged 3.9 points and two rebounds in 9.5 minutes. He entered the league in the 2010-11 season with the Boston Celtics, and also had stints with the Portland Trail Blazers and New Orleans Hornets (now the Pelicans).