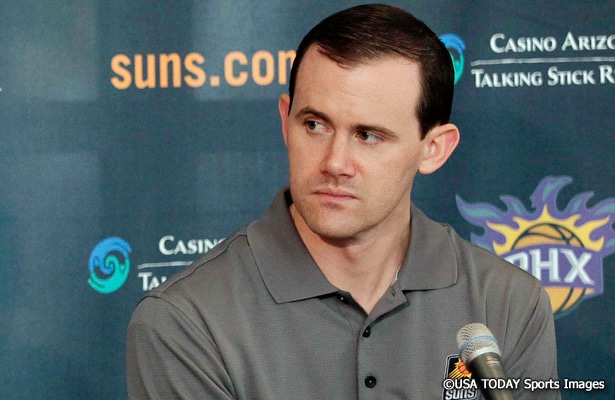 As momentum gathers for the NBA’s Feb. 20 trade deadline, the Phoenix Suns hold one of the league’s most valuable assets for deal partners wanting to save themselves several millions of dollars: the expiring – and insured – contract of injured center Emeka Okafor.

Once Phoenix reached the midway point of its season on Wednesday with Okafor still sidelined with a neck injury, an insurance policy began to take over payment on 80 percent of the remaining $14.4 million on his 2013-14 contract, league sources told Yahoo Sports.

Whoever deals for Okafor before the trade deadline will receive an insurance payout of $5.7 million – roughly $141,000 per game.

For the Suns, the appeal of Okafor’s financially friendly deal – armed with approximately $5 million in remaining salary-cap space – has general manager Ryan McDonough on the search to fortify his roster for a playoff run.

Entering this season, the Suns were determined to rebuild and stockpile assets. But after their early success, there has been a change of plans in Phoenix and the team is looking to win now and make the playoffs in the Western Conference.

The Suns are looking to be buyers at the deadline in order to strengthen their roster for a postseason run, and Okafor could certainly help them add a contributor. In addition to Okafor’s contract, Phoenix also has a number of young players and as many as six first-round picks over the next two years.

Because Ryan McDonough has done such an excellent job acquiring picks, the Suns could decide to part ways with one or two of those picks in order to sweeten a deal and land a significant player before the Feb. 20 deadline.

As Wojnarowski notes later in his article, the Suns are interested in acquiring an “All-Star-level player” should one become available, and they believe they have the trade chips to land a player of that caliber. Woj also says that the Suns’ plan all along was to flip Okafor’s expiring, insured contract before the deadline, so it sounds like Phoenix will be making a move.

“I definitely think he will stay,” La La Anthony said in an interview with Bravo TV’s “Watch What Happens Live.” “I know that he wants to stay, and I support him wherever he wants to go.

Carmelo Anthony says he will test free agency this summer. He is under contract through 2014-15 but can opt out after this season.

If La La said this on July 1, this would be huge news. However, so much can happen between now and the summer that this really doesn’t mean much.

Odds are, even Carmelo Anthony doesn’t know what his future holds at this point. Think back to this time in 2010. Everyone was talking about what would happen with LeBron James, Dwyane Wade and Chris Bosh, yet nobody was thinking about them all teaming up in Miami. Speculating about these things in January is extremely difficult since things change so much in just a few months.

I suppose this is somewhat of a good sign for the Knicks since, in recent days, talk had shifted to Anthony playing in Los Angeles or Chicago.

But what else was La La supposed to say when asked this question? “No, Carmelo isn’t going to re-sign in New York. In fact, I’d like to take this opportunity to officially request a trade for my husband. Your move Knicks.” Come on.

With a 16-9 record in his last 25 games, a Coach of the Month award for December on his mantle and a legitimate opportunity to get the Raptors to the playoffs for the first time in seven years, Dwane Casey could hardly be blamed for pestering the Toronto front office for a contract extension.

But, as a source told Sporting News, that hasn’t been the case—there have been, “no really significant discussions,” on extending Casey’s contract, which runs up at the end of this season.

It seems like Masai Ujiri is still trying to figure out what to do with the Raptors.

On one hand, the team is playing extremely well and one could make the case that they’re the third-best team in the Eastern Conference. On the other hand, Ujiri inherited these players and coaches, and may want to put his own fingerprints on the franchise.

How the Raptors play in the coming weeks could determine a lot.

At this point, it’s probably safe to say that not many people in Toronto are feeling very secure.