With DeAndre Jordan and LaMarcus Aldridge leaving their respective teams and taking their talents to the State of Texas, it is easy to see how the Washington Wizards have been overlooked.

Paul Pierce, a future Hall-of-Famer whose personality evidently became a part of the locker room last season, decided to do like the aforementioned two and return to his home state to presumably play out the remainder of his career. So yes, between the Dallas Mavericks, San Antonio Spurs, Portland Trail Blazers and Los Angeles Clippers, it was easy to overlook the fact that the Wizards may have snuck up on everyone and quietly improved themselves just as much as any other Eastern Conference team.

While we were busy ridiculing the New York Knicks and widening our eyes in amazement at the depth of Dan Gilbert’s willingness to spend, team president Ernie Grunfeld was doing everything in his power to not only recover from the departure of Pierce, but to ensure that his Wizards rise in the Eastern Conference would not ultimately go down as an aberration.

Make no mistake about it, Pierce can still play. That is something I witnessed personally during the Wizards bout with the Atlanta Hawks last spring. But if there is one playoff team in the conference whose ceiling is still unknown, it would be the youngsters residing in the District of Columbia.

What is most often overlooked as it relates to NBA teams and the progression of a young player who possesses talent are those that are in his ear. During the pre-draft process, in a conversation with Denver Nuggets point guard Emmanuel Mudiay, he said something rather profound.

“I know when you go out there, you start at zero. When your name is called, it starts all over again. You’re not a top player in the nation anymore, you’re not a high lottery pick, you got to prove yourself. It’s a whole new process. If I look at it that way, keep working hard, then everything should take care of itself.”

It seems like such a while ago that the Wizards selected Porter with the third overall pick in the 2013 NBA Draft. Anthony Bennett may have been selected at the top of that draft, but the list of youngsters who have already become plus-contributors at the NBA level is longer than the franchise’s 37-year championship drought.

On the other hand, Porter, in his first two seasons in the NBA, played just 8.6 and 19.4 minutes per game, on average, respectively.

First, it was Trevor Ariza and Martell Webster and then it was Paul Pierce and Rasual Butler—each of the aforementioned four took minutes and repetitions away from Porter. The difference between the poise and grace he showed in the Las Vegas Summer League in 2013 and 2014 was night and day. In 2013, Porter looked like a rookie who was timid, shy and clueless as to how to adapt to the speed and pace of the NBA game. In 2014, he impressed everyone who saw him play with his patience and ability to seemingly control games without being overly dominant on the ball.

His feel for the game seemed to translate, as his patience led to a more controlled shot selection, evidenced by his shooting percentages rising dramatically. As a rookie, he shot 36 percent from the field and only made 19 percent of his limited three-point attempts, whereas in his sophomore season, he connected at 45 percent and 34 percent, respectively.

Over the course of last season, due to injury, attrition or preservation, Porter was called upon to start 13 times and he responded by delivering 10.2 points, 4.3 rebounds and 1.1 assists per game—numbers that, at the very least, show that he can make positive contributions. 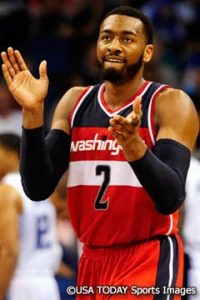 As his search for consistency continues, Porter will enter the season at or near the top of coach Randy Wittman’s depth chart of wing players. Wittman has let it be known that his Wizards plan on playing more “small ball” this season, and this comes as no surprise after seeing Pierce being deployed at power forward for spurts and Porter seeing time at the position during the Wizards playoff run which was thwarted by the Hawks.

During that playoff run, Porter played meaningful minutes and, most importantly, converted his three-point attempts at a 38 percent clip. He has combo forward ability and, over the course of last season, in flashes, served reminders as to why the Wizards selected him with the third overall pick in a rich 2013 draft.

This coming season, if there is one young player in the conference that I am interested in observing closely, it would be him. The question as to whether or not he can become an everyday contributor, along with the other “sneaky good” acquisitions made by Grunfeld are why the Wizards, to me, will be a team to watch.

As David West ponders his future and attempts to find himself in a desirable situation that could result in a championship, the Wizards are reportedly one of the teams he is considering.

While West would certainly add depth to the front-line in D.C., it is the acquisitions of Jared Dudley and Gary Neal that give Wittman’s teams two veterans that will fill needs. In Dudley, the Wizards will get a combo forward who is a plus-defender and a career 40 percent three-point shooter. He cannot come close to matching the overall offensive proficiency of Pierce, but at this point, he may be a more versatile defender.

In Neal, the Wizards have acquired a combo guard whose skill set should mesh nicely with Ramon Sessions. Sessions, while a capable reserve, is still a somewhat inconsistent shooter. That happens to be Neal’s strength, although he does also possess a better than advertised ability to drive and create space and opportunities for both himself and his teammates. At the very least, he will provide a nice insurance policy should either Wall or Beal get injured.

Together, Dudley and Neal give the Wizards two additional rotation players whose contributions have translated to wins in the NBA—that is very valuable.

The void created by Pierce’s departure will be tough to plug, but it will give Wittman more of an opportunity to play Porter with John Wall and Bradley Beal. In spurts, a lineup featuring Wall, Beal, Porter, Dudley and Nene could play nice “small ball” and could open up the floor for Wall—one of the faster guards in the league.

As it stands, the Wizards are reportedly hoping to land another wing player before the free agency season concludes, but unlike a host of other teams in the conference, they have a young core that still has tremendous upside. When next season begins, Wall will be 25 years old and will be flanked by a pair of 22-year-old players in Beal and Porter.

The Cleveland Cavaliers and Chicago Bulls will likely enter the 2015-16 season as the favorites in the Eastern Conference. The Toronto Raptors, with their acquisition of DeMarre Carroll, may have improved at the expense of the Atlanta Hawks. The Milwaukee Bucks will certainly rise, as will the Miami HEAT.

The Wizards, though, in the thick of it all, may ultimately emerge as bigger-than-expected winners. It all starts and ends with the health and productivity of Wall and Beal, but the opportunity to separate as a team will be based on whether seizes his opportunity to shine.

For a great many NBA teams, free agency is the key to building their rosters and solidifying their status as a contender. For a select few—the Golden State Warriors and Oklahoma City Thunder, for example—the key is mostly natural progression, developing chemistry and internal growth.

As Wall and Beal have grown before our very eyes, it is now time to see if the year Porter spent shooting with and training with Pierce will have a profound impact on his development as a pro. Like Mudiay said, things begin anew when you find a home in the National Basketball Association, and when Porter did, he found out that he had to earn his keep.

Entering his junior year, with the departure of Pierce and the acquisitions of Dudley and Neal, the Wizards will look around at an increasingly competitive Eastern Conference and wonder where they fit in. Yes, things are getting tougher, and in the end, whether the Wizards can keep pace will be determined by the third overall pick in the 2013 NBA Draft.

It’s been three long years and now, opportunity awaits. Like the Spurs, Mavericks and Clippers, the Wizards hope to improve their standing in their conference’s hierarchy, even if their hopes of doing so rest primarily on the emergence of a 22-year-old with immense promise.

In D.C., all eyes are on Porter. For him, it’s been a long wait, but finally, his opportunity has arrived.