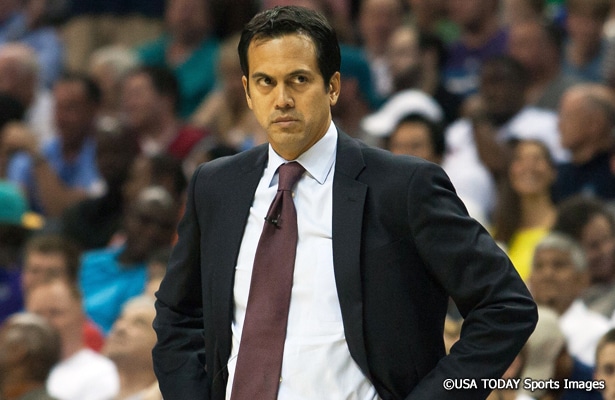 Four years ago, in Miami, the fireworks of hubris exploded and the pep rally ensued. LeBron James stood before Miami HEAT fans in his white hot uniform and declared that a dynasty was developing.

He famously counted out aloud, pontificating that Pat Riley would eventually eclipse Phil Jackson as the contemporary NBA’s lord of the rings.

And way back then, back before James knew what it felt like to embrace the Larry O’Brien trophy, the green Erik Spoelstra was thought to be in over his head.

Of his current cast of players, one of the two who know Spoelstra best, Dwyane Wade, discussed his coach with Basketball Insiders in a one-on-one conversation.

“My coach?” Wade surprisingly asked when I told him that I wanted to discuss Spoelstra with him.

“Nobody ever wants to talk about that guy,” he said with a slight chuckle.

And nothing could have been any closer to the truth. When the conversation got serious, though, and I asked Wade about how Spoelstra has progressed before Wade’s very eyes, he got quite serious.

“He has grown tremendously,” he said, recalling the man that his coach is today and contrasting him with the quiet and aloof video coordinator that Spoelstra was before 2008, before he was handed the reins of the team after Riley ceded the sideline.

In July 2010, after two seasons as the head man in Miami and a 90-74 combined record, at just 39 years old, Spoelstra hit the basketball talent jackpot, but it was a blessing and a curse.

James and Chris Bosh agreed to form the modern era’s most prolific triumvirate with Wade, and the three agreed to collectively embark on a journey that would eventually be marked by sacrifice and success. Today, we know that the impetus behind the Miami three and their mindset was and is Spoelstra. The HEAT have succeeded not in spite of their head coach, but in large part, because of him.

Once upon a time, though, the odds seemed stacked against him. Riley’s vision of Spoelstra becoming a great head coach? It was thought to never have a chance of coming to fruition.

Yes, Spoelstra turned in a respectable freshman and sophomore year as the head coach for the HEAT. But with James, Wade and Bosh? Under these lights? With these expectations? Surely, it would be too much for the neophyte. Riley, it was thought, would eventually slap Spoelstra aside, the same way he did Stan Van Gundy. And Riley, it was thought, would again subjugate his head coach in blind pursuit of the glory.

Now, four years later, as the HEAT vie for their fourth consecutive trip to the NBA Finals—a feat that has not been accomplished since Larry Bird’s 1987 Boston Celtics—Spoelstra is still widely overlooked.

His brilliant game-to-game adjustments, his tackling of all the adversity that he and his team have faced and even his existence as the adhesive that has bonded the potential, aspirations and talents of his dynamic trio—of those, you hear not a peep.

The building of a culture in Miami that is dedicated only to playing the game the right way, playing it to the best of your abilities and putting winning before everything else—of that, you hear not a mention.

Way back in June 2012, back when the HEAT were still in search of their first championship, Kevin Durant, Russell Westbrook, James Harden and Scotty Brooks stood in their way.

In every interaction and conversation I had with Spoelstra, each time I observed him up-close, his demeanor, candor and class were evident. And in a moment of honesty, before Game 3 in Miami, with the series tied 1-1, in 2012, he spoke about himself and his team’s journey.

“Well, probably the biggest thing is you just do it,” he said when asked about coaching for his first title.

“I get experience by just doing it. When I first got the job, it was nowhere near what it was last summer or two summers ago,” he said, recalling the team’s first season together when they eventually fell to the Dallas Mavericks in the 2011 NBA Finals. “You just try to compartmentalize. Going into it you prepare as much as possible. I had met with every single player and said, ‘hey, here’s what we can expect. There’s going to be an incredible amount of noise, everybody will be under a story line at some point. I’ll probably be under it every week.'”

A little more than a year before that point, the HEAT had lost eight of their first 17 games together. Secretly, James and Wade pondered whether they had made the correct decision in joining forces. Frustration mounted. The venom and hatred that emanated from all corners of the country created tangible tension in the locker room.

Still, green as ever, Spoelstra kept his troops together, his message never wavering.

We will figure this out. We are in this together. We just need to keep at it.

“I think one of his strengths is his ability to be able to prepare, to get us always prepared whether we are playing good or not playing good and to keep us even-keeled,” Wade said. “I think one of the things that he has grown a lot is just being open to what us as players feel, as well, and kinda working together to come with one common goal.”

Wade is speaking of the wrinkles that have found their ways into the HEAT’s offense over the past few years. The latest example is James’ progression and thriving as an off-the-ball player who has become superb at exploiting defensive lapses and converting off both catch-and-shoot opportunities and backdoor cuts.

Now, as they attempt to qualify for their fourth straight NBA Finals, the upstart Indiana Pacers have seen Spoelstra adjust on the fly and have caused Frank Vogel to go back to the drawing board.

The most effective adjustment was Spoelstra understanding that both Lance Stephenson and George Hill—the two entrusted to initiate the Pacers’ playmaking—are mediocre ball handlers, at best. Norris Cole has supplanted Mario Chalmers in the lineup because he is a better on-ball defender and applies better ball pressure. He is quicker and more agile and is difficult to get around.

Cole, by his own admission, has been effective due to the preparation of his head coach and his staff.

“I feel very prepared,” Cole told Basketball Insiders after the HEAT beat the Pacers in Game 3 of the series. “We always go over the game plan. At shoot around in the morning, we always get our prep books, in order to study, we can study all afternoon and we review the game plan before the game so we’re prepared. It’s just a matter of going out there and executing the game plan.”

Thus far, the HEAT have.

“It’s necessary to make adjustments,” Cole said. “Sometimes, you have to throw a wrinkle in there and coach has done a great job of throwing a wrinkle or two here and there and making adjustments that are necessary for us to win.”

Even the sage, Shane Battier, believes that Spoelstra is among the best coaches he has played for, and he knows a thing or two about observing a master of preparation.

“I think his strength is that he really thinks about the game. There’s not an angle he doesn’t dissect after a game. He’s willing to try to new things and try to squeeze every last bit of juice out of a coverage or out of something he sees out on the floor and he’s bold, he’s bold from that regard.”

Now, as the HEAT toil and face the prospect of meeting the San Antonio Spurs in the NBA Finals again, I couldn’t help but to recall my first question to Spoelstra during the 2013 NBA Finals, where he would square off against one of the greatest NBA coaches of all-time, Gregg Popovich.

“Look,” Spoelstra began, rather frustrated, “I haven’t ever looked it as an individual coaching challenge. Ever. That would be distracting. I’m focused, and our staff is preparing our team for this opportunity the best that we can. And each series has a life of its own.  We’ve faced great teams, great coaching staffs in the last three years, and they’re all different.”

And since the HEAT have become champions, under Spoelstra’s guidance, they have all fallen.

“We just spend our time trying to make sure we’re playing our best basketball,” Spoelstra said.

Nobody has spent their time being more focused on that than the man who has emerged as the leader for this team.

“He doesn’t like the spotlight,” Wade said. “It’s just not who he is. It’s weird that he’s the head coach of this team, being the head coach of a team like this, with the big personalities, but he does it and he doesn’t want it to be about him and it’s worked for him.”

As well, it has worked for the HEAT.

Now, just a few victories away from doing something that has not been done in almost 30 years, the questions about whether Spoelstra can manage these personalities and the bright lights and the expectations? The doubters are now as silent as the Spurs’ locker room was in the aftermath of Game 6 of those 2013 Finals.

“From the beginning, I think the biggest thing is that coach always said that we are all in this together,” Wade recounted. “Nobody was coming to save us, nobody was coming to help us, we had to do it ourselves and it’s just us. It’s him, it’s the players, it’s everybody that’s in this gym and we had to figure it out.”

On the cusp of cementing themselves as a dynasty, despite health concerns and progressive attrition, it is safe to say that the HEAT have.

It has been a long and circuitous journey for Spoelstra and his HEAT. But for this coach, each day begins just as the one before it ended.

While the world was watching James become a star, the man who helped him become a champion, the man who spearheaded that effort, he has largely been ignored.

At the end of the day, though, Spoelstra is fine with that.

Determined, his HEAT continue their march toward their three-peat and their mention among the sport’s dynasties, and they do so with a common goal in mind. They do so led by two of the greatest talents the game has ever seen.

And they continue onward, led by the man who was quietly there since the beginning, enduring sleepless nights along the way.

His name is Erik Spoelstra, and he’s worthy of your respect.