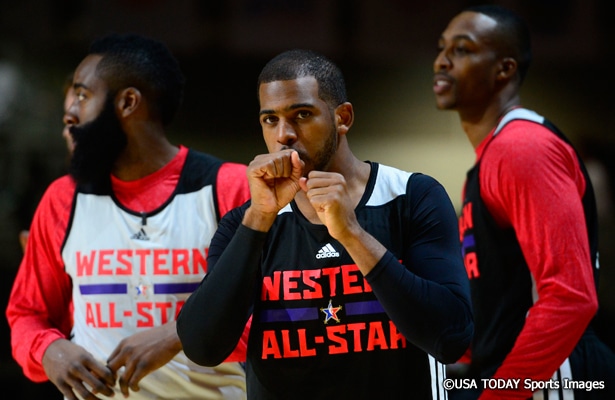 The Funny All-Star Video of the Night

We feel for those that weren’t able to witness a young or even in-prime Shaquille O’Neal. The man was one of the more dominant forces the league has seen. That combination of size, strength and agility were unparalleled during his day.

All-Star Weekend Crossover of the Night

Always count on Dame Lillard to deliver. From hanging with eventual Super Bowl winner Marshawn Lynch during SB weekend to doing his thing at NBA All-Star weekend with Juve The Great.

Block of the Night

Phoenix’s Miles Plumlee with the rejection of Anthony Davis during the NBA Rising Stars game.

Swag of the Day

Nice ride and crib, Booz…but you didn’t need to scream “AND ONE” at the photographer right after the shot.

All-Star Flashback of the Night

Glen Rice and a ref we believe may have been Steve Javie got a pretty good view of MJ styling one through during the 1995 NBA All-Star game.

One of our very own, Melissa, is representing the @spurssilverdancers this weekend at NBA All-Star 2014!

Cheerleaders make All-Star weekend too? Yes, of course they do…and why wouldn’t they?