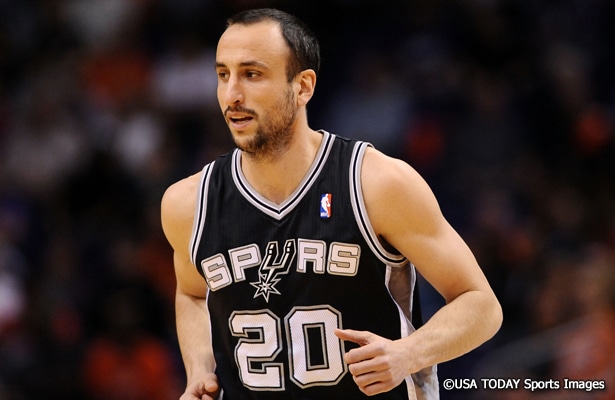 Hilarious Videos of the Night

Check out this dedicated HEAT fan having a great time watching her team become the first to advance to four-consecutive Finals since the Celtics did it in 1987…and talking all types of junk in the process. S/O to the guys at BSO for the find.

The “Brow” takeover is already upon us. Look for the Pelicans’ big man to not only continue improving and dominating on the court, but in the advertisement game as well.

Street Baller of the Night

Imagine going to the park as a child and seeing your favorite super hero on the court just breaking people off like this…well, that was actually Grayson Boucher (AKA “The Professor”) best known for his days playing on the And1 Mixtape tour.

.@spurssilverdancers here at the Alamo ready for out the Black Out proclamation! #gospursgo

These Spurs Silver Dancers look ready to hold down the Alamo with the HEAT coming into town.

Easy to see why these have become an instant hit this postseason. Artist/animator Richard Swarbick captures Manu Ginobili’s clutch three-pointer from the series-clinching victory over the Thunder in the Western Conference Finals.

Zach LaVine continues to impress during his workouts, but can he make the top teams leap at the opportunity to draft him?

Marcus Smart just hanging out in between drills at the Lakers’ El Segundo practice facility.

Noah Vonleh has definitely been in the weight room since the college season ended.

#Repost from @carrickfelix30 with @repostapp — Words can not describe my visit today to Village prep today. It was truly an amazing experience. We sometimes forget the importance of the youth and the impact they have for generations to come. Being able to share some knowledge and positive thoughts Truly was a blessing, Thank You Village prep for having me. #Motivation #blessed #Thankful #Youth #Iwishicoulddance #knowledge

DeMarre Carroll stopped by our basketball camp at the MJCCA today…fun times!

Always great to see players continuing to give back to the community throughout the offseason as well.