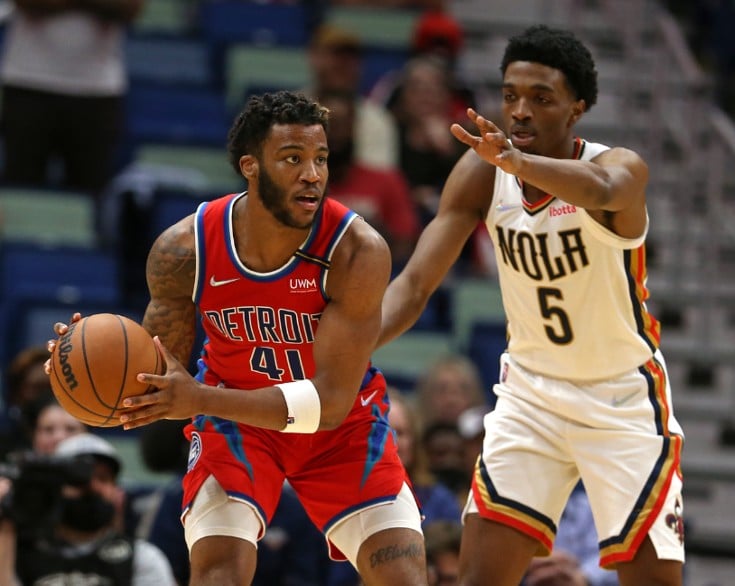 In Tuesday night’s interconference matchup, the New Orleans Pelicans (18-32, 23-26-1 ATS) are playing the Detroit Pistons (12-37, 25-24 ATS); NBA picks are featured here. Will the Pelicans end their four-game losing streak tonight? In addition to the starting lineups, our top NBA picks and betting trends are posted below.

All Pelicans vs Pistons betting odds can be found at BetOnline

Moreover, on Monday, in the Pelicans’ 93-90 road loss versus the Cavaliers, guard Devonte’ Graham led his team in scoring, putting up 20 points in 29 minutes spent on the court. Forward Jaxon Hayes also closed out his performance with 19 points and 7.0 rebounds in 31 minutes played. New Orleans has won four of its past 10 contests. However, they are now on a four-game skid. After dropping another game on the road, the Pelicans are 7-19 away, 11-13 at home, and 10-16 ATS on the road this season.

On the other side, in the Pistons’ surprising 115-105 home win over the Cavaliers on Sunday, forward Saddiq Bey scored a team-high 31 points in 36 minutes of action. Rookie guard Cade Cunningham finished with a triple-double. He amassed 19 points, 10 rebounds and 10 assists in 37 minutes played. Detroit has won just three of its previous 10 games. The team is 8-15 at home, 4-22 away and 13-10 ATS at home.

Referencing ESPN’s Basketball Power Index, the Pelicans have a 57.7% probability of winning.

Concerning previous head-to-head matchups, in the last three meetings, the Pelicans are 2-1 against them. On Dec. 10, 2021, the first meeting during this regular season, New Orleans won 109-93 at Smoothie King Center. The Pistons have not defeated them since Feb. 14, 2021, when they won 123-112 at Little Caesars Arena.

In other news, during a media interview at practice on Monday, Pistons’ guard Cory Joseph was asked about teammate Isaiah Stewart’s impact on the court. Joseph said, “He’s the type of player you love to have on your team, but if you’re playing against him, you hate him.” In a total of 41 games played this season, Stewart has averaged 7.9 points, 7.9 rebounds and 1.1 assists per game.

#Pistons Cory Joseph on Isaiah Stewart's energy: "He's the type of player you love to have on your team, but if you're playing against him, you hate him."

Furthermore, the Pistons are still without Jerami Grant. And, Josh Jackson is listed as doubtful on Detroit’s injury report. If Brandon Ingram ends up playing tonight for New Orleans, the better option for gamblers is picking the Pelicans to win. Nonetheless, the Pistons could likely cover the spread. To add to that, the total will go over 214.5. To learn more about sports betting, read our handicap betting guide. Other NBA Picks are on the main page.