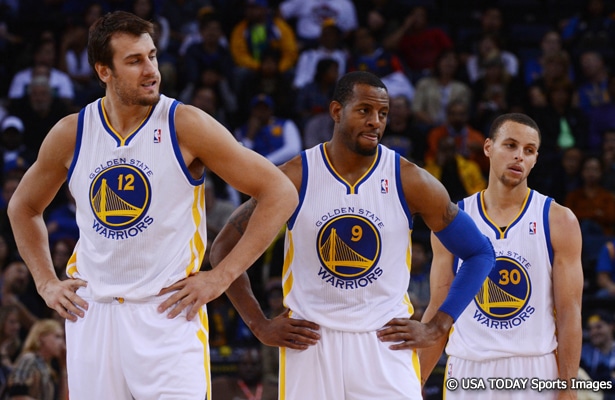 Nine months after engineering the Golden State Warriors’ first playoff appearance and series victory since 2007, General Manager Bob Myers sat down with Basketball Insiders’ Nate Duncan in the midst of another solid season.  In part two of a two-part interview, Myers discusses the Warriors’ acquisition of Andre Iguodala, the extension of Andrew Bogut and the team’s approach with its core going forward.  For part one, click here.

With Andrew Bogut’s three-year, $36 million extension, I believe that until Kobe Bryant’s extension, he was the only non-rookie extension under the new CBA. Why did that work for him and for you? For a lot of people, it doesn’t work because you can get more years as a free agent.

Myers: I think you said it right, in this day and age in a new CBA, a player that’s playing well likely will opt to wait because they can add years. Had he waited until this summer, he can get a five-year deal. The way that we structured it in the extension, all we have to give are those three years. From the player’s side, a lot of players don’t want to come to the table and discuss the extension because they’re forfeiting money in the future. But Andrew understood that this is a place he wanted to be, and he obviously wanted to get a fair deal. I felt like we offered a fair deal, obviously he did too because he accepted it. But to find veteran extension opportunities, sometimes you need circumstances where a player is willing to possibly forgo an extra year of money for the security of getting a deal then instead of playing a year out. If they’re playing on teams that are willing to commit and not make the player play out that extra year, and willing to commit to him early, there are always variables that play into it. Some financial, some situational; injury plays into it to some extent, age plays into it, whether that player feels like he can get another deal, happiness, how happy is the player in that market, on that team with his coach and his front office. A lot of things have to line up and that’s why I think you see few of those types of deals.

Going to the Andre Iguodala sign-and-trade, at what point did the thought of opening up the cap space over last summer kind of come into focus for you guys? [Note: In July 2013, Golden State acquired Iguodala via a sign-and-trade. Golden State acquired Iguodala from Denver and signed him to a four-year, $48 million contract. To open up the cap space to sign Iguodala, the trade included offloading $24 million in salaries attached to Brandon Rush, Richard Jefferson and Andris Biedrins in addition to 2014 and 2017 first-round draft picks to the Utah Jazz.]

Myers: Our ownership is an incredible ownership with Joe [Lacob]. He’s always thinking aggressively as far as how to upgrade talent and how to move the team. Like any team, we look at the free agent pool and what players we felt like were able to help us and identified him as one of them. Now, I will also say that realistically we felt like it was an extreme long shot to get a guy like that, but after meeting with him in Los Angeles and seeing his desire to be a part of a group trying to build, that really motivated us. What started as a seed from our side in the situation, we felt like this would be a great guy to add to our roster, was cemented when we met with him and he echoed the same sentiments. From that point on, it was full steam ahead to try to find a way to do it. Even after that, though, my personal belief was that it remained a long shot. Just because we wanted to do it and he wanted to do it, that was nice and made us feel good about it, but you’d still put low odds on it – less than five percent. We had to find multiple trading partners taking a lot of money; it had to fit what they were trying to do. It really came down to the last 30 minutes, where his agent had said to us, ‘Look I’ll let you guys try and try and try, but you have a deadline now.’ He was very fair about it. So that really came down to the wire, and fortunately for us the league is comprised of 29 other teams and if you’re really motivated to do a deal, you can usually find a partner – sometimes you can’t and thankfully we did. I think it fit what Utah was looking to do, and it all lined up. All of the things that had to happen for it to happen, made it seem very unlikely. We’re just glad it came to fruition.

How much trepidation was there about surrendering those picks and also now the flexibility, not being able to trade the 2015 and 2016 pick? [Note: The NBA’s Ted Stepien rule prevents a team from trading its first-round pick two years in a row. Because the Warriors dealt their 2014 and 2017 picks to the Jazz to facilitate the Iguodala sign-and-trade, they are unable to trade their 2015 and 2016 picks.]

Myers: We wanted to build upon what we had established as far as some level of success in the organization. We thought it might be difficult to keep two core guys in Jarrett Jack and Carl Landry at the numbers we would have liked to have kept them at. They were paid well and they deserved to be paid well. We were looking at a situation where if we wanted to maintain and keep the same team, we’d be heavy into the luxury tax. So it wasn’t just adding Iguodala, it was adding Iguodala along with clearing up a lot of salary on our books that really made us believe the deal was worth it from our side. If somebody wanted to compartmentalize the deal, you’d say one pick was for Iguodala and one pick was to get off $24 million. Would we do that in a bubble? Yeah, we felt like that was worth it, because it wasn’t just two first-round picks for Iguodala. We would have been looking at a team, should we not have done anything and stood pat, likely the same team coming back at the five starter spots, but also without Jarrett Jack and Carl Landry, who were huge in regards to our success last year. That likely would have set us back and we didn’t really want to take a step back after having some success for an organization that hadn’t had any in so long. We wanted to try to not just maintain, but take a small step forward. That was the motivation behind the deal and moving the picks. You never know how things could have worked out, you never know in any deal. Our thought at the time when we did it and constructed it was that it was worth it.

With David Lee being 30, Andrew Bogut being 28, Andre Iguodala being 29 and Steph Curry now being is his prime, is there a feeling that these next two years or so are really the organization’s best window to win, at least in the short-term?

Myers: Actually, really no. We feel like we’ve still got players, more than two and three years where we think our core can play at a high level. We think continuity — although maybe some physical tools diminish with age — and your mind improves. Like look at a team like the Spurs and some of these teams that are a little older, even the HEAT to some degree, have some veterans that have been in the league a long time on their team and have experienced success. You look at some of the Celtics teams before they decided to go in a different direction. Continuity and playing together can overcome athletic ability, speed and quickness, and things like that. We feel like we’ve got a healthy window here to evaluate this team, and we’re going to give it a shot to see how it goes. I think it was perceived to be a win-now type move, where internally we more perceived it as this makes us better; we think it’s worth it for all of the reasons aforementioned. It wasn’t a situation where we feel like we’re playing Texas Hold ‘Em, where we put all of our chips on the table. We feel like as an organization, we’ve made a bet and put some chips on the table and we felt like we had a good hand. But we also have a stack of chips that we haven’t played. We don’t feel like this trade or the acquisition of Iguodala makes us limited and this is it for the next two, three years–if it doesn’t happen then we’re nowhere. We don’t have that mindset in our front office and ownership side.

Obviously trades can always be made, there’s no such thing as someone being untradeable in the NBA. With Andrew’s extension and Andre having a 15 percent trade kicker, it’s going to be relatively difficult to make further moves, but I assume this core going forward is one that you’re very comfortable with?

Myers: Yeah, we’re comfortable. I read today that the starters are 21-7 and I don’t know how much stock to put into something like that. I guess it’s better than 7-21, but we do feel like it can be a competitive group heading into the future. We feel like it hasn’t hit its ceiling or even close to it, we hope, both for this year and beyond. We are comfortable with it. We have time to see how it develops. You have to sometimes be patient as you progress as an organization. We are not thinking that if we don’t win a championship this year, it’s a failed season; we don’t have that dialogue, we don’t believe in that mentality. We obviously want to compete and compete at the highest level. We feel like we’re going to give this core and these players a healthy amount of time to see if it works. We also believe that we maintain now and believe in the future a healthy amount of assets on our roster. We’re very attractive, we have a lot of talent. It allows you to have flexibility should you want to make moves. I think you’re right, we’re going to give this a good go and believe this team can compete with some of the best teams.

Did you know that these starters, this five-man unit would be as good as they’ve been?

Myers: No we didn’t. Realistically you do your best, but you don’t know. You’re putting it together; there are so many different factors that equate to success. It’s not always about putting the best five individual players together. Sometimes you have to see a guy like Iguodala that has to be less aggressive for our team to be a better team. Is that the right thing? We’re figuring that out. What roles should each player take within our team to make us the most successful as a team? It’s always a work in progress. I don’t think a sample size of 28 games is enough to really make any concrete conclusions from.

If you missed it, check out part one of Nate Duncan’s interview with Bob Myers.