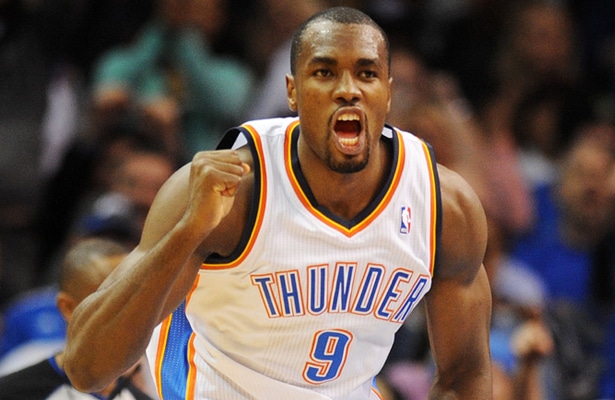 Serge Ibaka, the Oklahoma City Thunder’s shot-blocking luminary, may collect the league’s prestigious Defensive Player of the Year award in the next few weeks. While critics and fans alike have taken note of Ibaka’s increasing offensive contributions this season, his already-impressive defensive prowess has markedly improved as well.

He tops the league in Defensive Impact (statistics measuring defense, considering blocks, steals and defending the basket); players defended by Ibaka are shooting just 44.2 percent at the rim this year. Plus, he leads the league in total blocks (209). Ibaka is averaging 15.2 points and 8.6 rebounds compared to 13.2 points and 7.7 rebounds last year. He’s logging increased numbers in assists, steals, field goals and even three-pointers. He ties teammate Kevin Durant in double-doubles (27) despite averaging about six minutes less in playing time.

Ibaka provided a remarkably straightforward and simple answer when asked to explain what in particular has led to his improved season.

“Just focus,” Ibaka told Basketball Insiders. “Focus, because being in a league where everybody works hard, you definitely (have to) be focused and try to consistently do that.”

At just 24 years old, with his prime still years away, what is the ceiling of the 6’10 power forward? How much better can he get?

“Ceilings are fiction, to be honest,” veteran Derek Fisher said. “You can go as high as you want. I think Serge has not just all the physical abilities, but the mindset of coming to work every day to work hard and get better. Come in early, before practice, after practice, weight room, taking care of his body, rest, recovery; so, as far as he wants to take it, that’s how far he can go.

“Hopefully we go into the offseason the way we want to. I don’t worry about Serge in the offseason. He’s definitely going to get better regardless how he ends this season.”

Durant and Kendrick Perkins appear ready to give Ibaka the Defensive Player of the Year designation now. He ranked among the top three in DPOY voting in the past two seasons.

“He’s the best defensive guy in the league, I think, for his position,” Durant said.

“He does a great job defensively,” Perkins echoed. “I don’t know how you can’t give him Defensive Player of the Year.”

As Thunder coach Scott Brooks continually points out, stats provide valuable information in measuring Ibaka’s many contributions, but they certainly don’t capture how many shots and plays he alters as he greets opponents entering the paint.

“That’s what makes our defense good,” Brooks said. “When everybody is participating, and when we do have a breakdown, he’s out there backing everybody up and covering for everybody’s mistakes.

Whether one subscribes to his “IBlocka” nickname or “The Serge Protector,” Ibaka deserves a lot of credit for helping the Thunder maintain its fifth ranking in Defensive Rating throughout the recent injuries to top defenders Thabo Sefolosha and Perkins.

“It’s incredible,” said Sefolosha of Ibaka’s ability to protect the paint. “But at the same time, we don’t want it to turn into a curse where we just let guys go to the basket hoping that Serge is going to be there to block shots. We got to guard our man.

“He’s been doing it all season long,” Russell Westbrook said. “He’s the best shot-blocker in the league.”

Ibaka has certainly come a long way from those early days when Brooks relied on hand gestures during practice as he was learning English. While his accent remains fairly pronounced, Ibaka’s communication skills have proven to be a real difference-maker in reaching higher levels of play.

“It’s pretty scary sometimes,” shared Reggie Jackson on the language barrier. “You don’t know if he has the best understanding of basketball, and he’s playing this well. It’s just scary to see what’s going to happen when he puts it all together.”

Those fans cheering on the top row of the Chesapeake Energy Arena in Oklahoma City can hear Ibaka’s booming on-court instructions as he directs the defense. He says Perkins has been instrumental in helping him become a vocal presence; in turn, is he teaching the Thunder’s rookies how to improve in that area?

“Of course,” Ibaka replied. “Helping the rookies, like Steven (Adams). He’s young. Andre (Roberson), you try to help them. That’s what I did. That’s what makes us different and everybody tries to get better.”

“I’m starting to understand what Serge is talking about in the back,” newcomer Caron Butler said with a smile. “I’m catching on to his accent; it’s coming.”

Fisher explains how Ibaka’s improved communication has added value in other tangible ways, such as in mentoring his teammates and providing sound leadership.

“I think that’s one area where he’s continued to mature and feel more comfortable stepping into a leadership role vocally in terms of saying the right things to his teammates, speaking up when he feels like something is on his heart or on his mind,” Fisher said. “That all factors in to being on a team and being part of a group. That also adds value to your team, so that’s an area where he’s continued to improve. I think he’ll continue to bring value to the organization in that regard.”

“He’s been spectacular,” Jackson said. “He’s been great for us, especially in pick-and-pops. He’s just been hot. Probably the best guy in the league at it, I’m pretty sure of that.

“He’s been shooting the ball pretty well. He’s been understanding whether to pick-and-pop, the times he needs to roll, (and) he’ been doing a great job of finishing at the basket for us strong. He’s still just been a tenacious defender. The sky’s the limit for him. He’s so athletic.”

As for Ibaka’s opinion on how improve his game, he said this: “Just keep working, working on my defensive moves. On offense, keep working to shoot better and try to keep (getting) better on defense, too.”

In a league full of players devoted to excelling on the defensive end of the floor, move Ibaka even higher on that list. The panel of sportswriters and broadcasters casting their ballots for the Defensive Player of the Year may decide he’s at the very top this season.