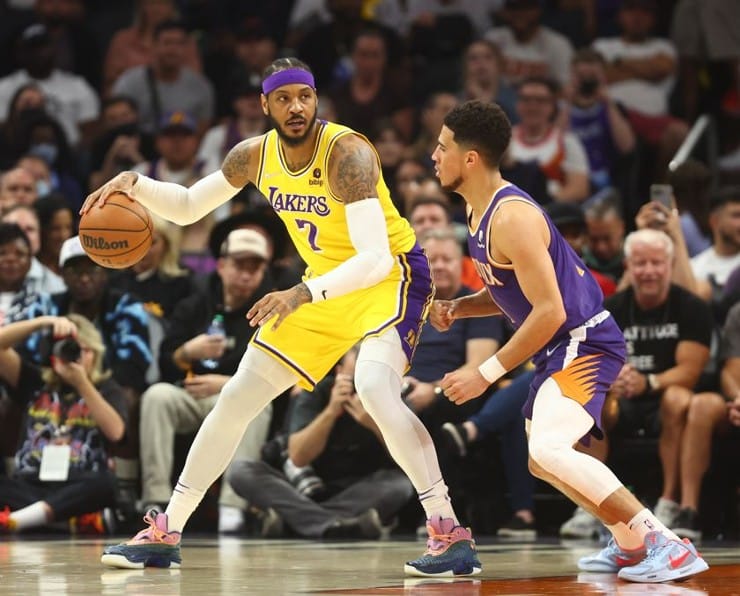 Carmelo Anthony last played for the Los Angeles Lakers. On August 6, 2021, the 10-time All-Star signed a one-year deal with the team.

Five days later, in the Lakers’ 121-118 win over the Memphis Grizzlies, he moved ahead of Moses Malone into ninth place on the NBA all-time scoring list. Anthony ended his performance with 28 points.

Of course, on Nov. 8, Anthony put up a season-high 29 points against the Charlotte Hornets. The Lakers defeated them 126-123 in overtime at Staples Center.

Should the Lakers re-sign Carmelo Anthony?

So, why should the Lakers re-sign the aging forward? Yes, Anthony can still contribute at a high level. Under head coach Darvin Ham, the team now has a chance to start over fresh. They should at least give him one more chance. After all, injuries are inevitable.

According to NBA Insider Zach Buckley, if Lakers G.M. Rob Pelinka passes on the opportunity to re-sign Anthony, the decision might come back to bite him. What if the Bulls, Suns, Heat or Celtics bring him in? The Suns still have one more roster spot open.

“The Lakers have upped their youth and athleticism on the perimeter this offseason, but they could stand to add more shot-making,” explains Buckley.

“Or rather, retain the shot-making they already had. Carmelo Anthony showed there’s more in the tank (at least on the offensive end) for the now-38-year-old.”

In the 2019-20 season, the Lakers won a championship with Rajon Rondo, Dwight Howard, LeBron James, Anthony Davis and other players under head coach Frank Vogel.

Because of the COVID-19 pandemic, the 2020 NBA Playoffs were strange. Fans think the Lakers were at their best in the Orlando Bubble. And it’s a tough point to argue.

Nonetheless, with help from Kyle Kuzma, Rondo and Howard, the Lakers were able to play their best basketball that season. Anthony Davis also stayed healthy. Injuries are an important factor to consider.

Not to mention, it remains to be seen on whether or not the front office made the right decision in trading for Russell Westbrook.

Without Kuzma, Rondo, Kentavious Caldwell-Pope and Talen Horton-Tucker, the Lakers’ bench just wasn’t the same last season. If Ham has Anthony come off the bench, it could be the best move to benefit the team. As a starter or bench player, the frontcourt would improve.