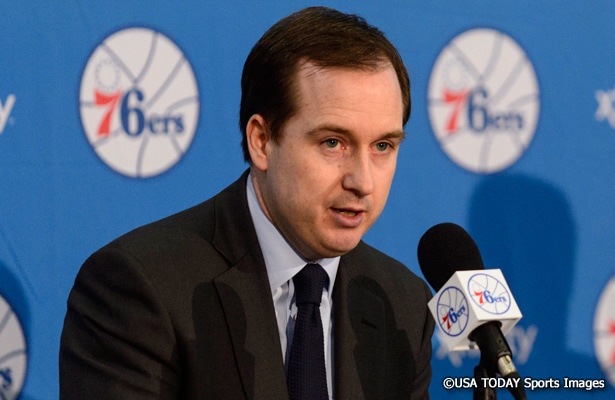 One cannot turn a page on the basketball internet this season without encountering a discussion of “tanking.” The implication is that the league has a massive problem with teams intentionally losing games to better their draft picks. It is totally understandable that these pieces proliferate; they are funny.* Moreover, it is fun to try to come up with solutions to this theoretical problem.  It is quite amusing to overstate the problem–until the dialogue begins to potentially effect real change that could remove hope from downtrodden teams.

*My personal favorite is Power Tankings.

The “Tanking” Epidemic is Overblown

Make no mistake: the problem is massively overstated. For example, take one recent column in which the Bucks, Magic, Lakers and Pistons were described as “tanking.” This designation simply is not accurate, especially since it alleges “[t]he team’s front office has deliberately weakened the team in an attempt to lose as many games as possible.” The “tanking” Bucks made a number of middling veteran signings last summer in an effort to compete, and have improved their net rating by about five points per 100 possessions since the All-Star break. The “tanking” Magic just beat West contender Portland while improving their performance post-break despite a Western road trip. The “tanking” Lakers recently beat the Thunder and absolutely destroyed the Knicks. The “tanking” Pistons spent boatloads of cash on Brandon Jennings and Josh Smith in what is looking like a misguided attempt to make the playoffs and save Joe Dumars’ job.*

*The Pistons do have a massive incentive to lose now because their draft pick owed to the Bobcats is top-eight protected. Tanking to protect protected picks is a separate problem that absolutely does occur, with the most notable examples being the 2012 Warriors and the Wolves for about five years after they acquired Marko Jaric for Sam Cassell and a top-10 protected first rounder in 2005. However, this sort of tanking could be eliminated by simply allowing only lottery protection on traded first rounders.

Other bad teams are not intentionally losing either. New Orleans owes a top-five protected pick to Philadelphia, yet recently had a five-game winning streak as Anthony Davis has blown up and played through a few minor maladies to boot. Tyrone Corbin has played veterans like Richard Jefferson and Marvin Williams plenty of minutes in an effort to save his job, and the Jazz played .500 ball for a solid stretch this season. And don’t forget the Suns, a “tanking” team projected to have the second-worst record in the league that instead could win 50 games.

There seems little evidence that tanking, aside from being fun to joke about, actually hurts the league’s bottom line. Bad teams in this allegedly tanktastic year are no worse than usual, with all but two teams having already won at least 20 games. Many eras in league history, including the mid-to-late 1990s, saw a much larger proportion of great and terrible teams.*

*This may have been related to expansion that added the Vancouver Grizzlies and Toronto Raptors (who actually beat the 72-win Bulls that year) in 1995-96.

Injuries, poor management and the natural rhythms of the success cycle mean there are always going to be bad teams. Moreover, teams that are hopelessly out of contention at the end of an 82-game slog naturally have less urgency than those gearing up for the playoffs. Bad basketball has always existed, and it will continue to exist regardless of the incentives provided by the draft. This year’s Sixers have been extremely clear about not trying to compete this season, but subjectively, I cannot recall any other team in the lottery era nearly so egregious.* Making massive changes to the system to address the play of one team in one season seems like a massive overreaction, especially when we do not know whether any team will follow the Sixers’ lead to such an extent, or that this strategy will even work for them.

*The Sacramento Kings of the late Maloof era do come to mind, but that was more a function of their dire straits financially than a concerted strategy to tank for draft picks. Bryan Colangelo admitted to “tanking” with the 2012 Raptors, but then went on to describe completely legitimate goals of development and evaluation of young talent rather than intentional losing of games. That team ranked 14th in defense, not exactly the hallmark of intentional losing.

For context, it is worth reviewing the Sixers’ offseason. They traded borderline All-Star point guard Jrue Holiday for Nerlens Noel and a top-five protected pick in the 2014 draft, a move that was instantly proclaimed a great value by the majority of informed commentators. They also waited to hire head coach Brett Brown until well into the offseason, spawning numerous jokes but ultimately making no difference for their competitiveness this year. The Sixers let all of their (mediocre) free agents walk and signed no one of note, electing to keep their cap space open to facilitate trades later in the year and starting the year below the salary floor.

Although the overall non-compete this year was rather shocking, these moves make sense individually and in the aggregate. Signing some long-term free agents would not have been smart, as they would have had to massively overpay for a player who did not fit their success curve. And would signing short-term free agents really have helped much? It certainly is difficult to think of players who signed one-year contracts who would have been available and willing to sign with the Sixers during the off-season that would have moved the needle much. Had the Sixers signed and kept such players all year, would winning another five games with that provisional crew have been any less abhorrent to Philly fans? In fact, it is very likely that many fans would have complained about wasting playing time on rent-a-players instead of developing the youngsters or getting what they could for the veterans.

Perhaps the real problem is the fact that teams do have some incentive to lose games over the course of the season, which even Adam Silver acknowledged in his Q&A at the Sloan Sports Analytics Conference. But rebuilding/tanking may well represent the rational course of action even in the absence of an incentive to raise the position of their own draft pick. The Sixers’ trades of Spencer Hawes and Evan Turner are a big part of the reason why they have been historically awful rather than really bad over the last month and a half. But those players were free agents who did not fit the organization’s timetable and would have cost far too much to retain. The Sixers absolutely did the right thing in nabbing whatever assets they could for those players, even if they were mere second round picks. And those trades were further facilitated by the extra cap room the Sixers had preserved.

Similarly, the Sixers should not have drafted, say, Ben McLemore instead of Noel simply because he was due to miss much of the year. Noel was considered a possible number one overall pick, and may well have been a steal at number six.

The Sixers made the right moves, and these moves were probably correct even without the lure of a higher draft pick from losing games this year. Look at baseball, a sport in which “tanking” has never been discussed and the importance of draft position has only recently become readily acknowledged. Baseball teams have long traded away free-agents-to-be for future assets, avoided signing mediocre veterans and opened up time for younger players.  This allows the organization to evaluate what part of the future these assets can play even knowing it could lead to more losses in the short-term. The nature of sport, and perhaps of life, is that short-term pain is often necessary to secure long-term gain. This is true regardless of draft incentives.

Hopelessness Is a Far Greater Evil Than Tanking

One of the big arguments behind the rush to curb “tanking” is that it is bad for the bottom line. Fans of downtrodden teams pay darn good money for these tickets, and it is a crying shame they have to watch an inferior product! But the actual decline in win percentage of lottery teams in their last 30 games is almost imperceptible.  And nobody has ever complained that baseball has long increased the size of its rosters in September and let non-major leaguers play many of the innings that month. By definition this decreases the quality of play, and teams that play minor leaguers in these situations cannot be trying their hardest to win, yet nobody seems to have the slightest issue with this developmental tool. Still, NBA tanking decriers need a moral justification, and ostensible decline in quality of play provides it. But the quality of play argument really is a red herring.

Nonetheless, accept for the sake of argument that the quality of play does decline a bit because teams are not trying as hard to win. One of the ideas that has supposedly gotten traction with the NBA is the wheel idea proposed by Celtics assistant general manager Mike Zarren. In this system, each team would get a top-six pick every five years, and know what pick it would have for the next 30 years regardless of record.  Let’s say the wheel were implemented, and due to the fact it would curb “tanking” a team like the Sixers tries harder to win and alienates its fans a bit less. They sign a couple of one-year free agents, hold onto them all year and win 25 games instead of 17.*

Now imagine the Sixers had the 25th, 23rd, 14th and 11th picks in the next four drafts. The wheel has resulted in an incremental retention of fan support over one year, but the Sixers now have no top-10 pick coming. This hypothetical Sixers team sure seems pretty unlikely to compete anytime soon. Making it much harder to improve over the long-term (and moreover, to sell at least the possibility of improvement) is far worse for bad teams’ bottom line than the dubious proposition that they may alienate fans by not trying their absolute hardest to win individual games in a lost season.

*Draft picks are even more important to bad small-market teams now that the new CBA has changed the cost and impact of the luxury tax on all NBA teams.

Any Changes Should Be Limited

On a macro level, the NBA’s system works to create cycles of success as teams compete and then rebuild. This cycle is what separates American professional sports from their counterparts in other countries, where the richest teams invariably rule the roost year after year.* The draft is a key part of providing hope for the worst franchises in the league and ensuring that only the most mismanaged remain in the doldrums for too long.

*Consider European soccer or basketball. With few exceptions, the same few teams are in competition every year unless a rich new owner becomes involved.

Major changes to prevent the tanking “problem” may work to that limited end, but they would likely create far more problems than they would solve.  As Mark Cuban said, “The law of unintended consequences never stays silent.” If teams continue to do what the Sixers did this year, and if it is truly deemed a problem, a number of far simpler solutions exist. The league could slightly re-weight the lottery, or perhaps decree that teams finishing below a certain win total are ineligible for the number one pick to encourage at least a baseline level of competition. But a massive change that failed to preserve a reasonable relationship between losing and high draft picks would create far more problems then it would solve.

“@NateDuncanNBA: Coming out early isn't even so much about the second contract as it is the third. NBA players call it "two tract shawty"