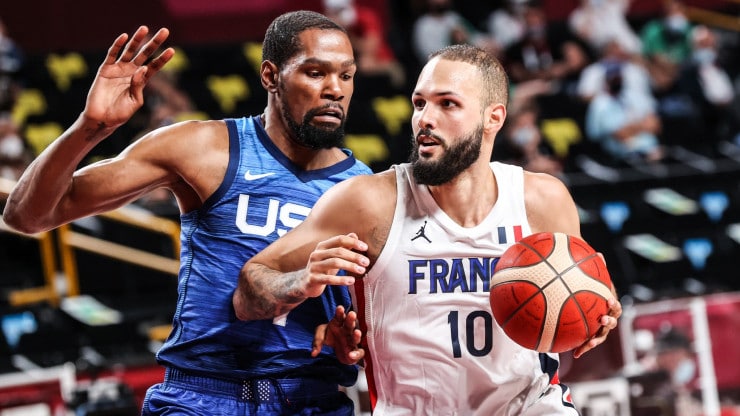 On Friday, August 6, 2021 at 10:30 p.m. (EST), Team USA will play in a highly anticipated, rip-roaring rematch against France for the gold medal. On July 25, in a stunning upset, the Americans lost 83-76 versus the French to open their 2020 Tokyo Olympics. This loss snapped USA’s 25-game winning streak at the Olympics, and it was also their first loss since 2004. Per odds retrieved from Bovada, USA are 12.5-point favorites over France.

In the semifinals, USA defeated Australia 97-78 and France won 90-89 against Slovenia. The gold-medal final game can be watched live on NBC or via the network’s Peacock live streaming service. Peacock is free with ads, however, viewers can pay $4.99 per month to watch live content ad-free. For other options, a free trial is available for fuboTV, YouTube TV, Sling TV and Hulu + Live TV.

Team France are entering the gold-medal final game undefeated. In their 83-76 win over USA, they finished on a 16-2 run. The USA missed their final nine shots, leading to the Americans’ seven-point loss in the Group A matchup. It was only their sixth loss all-time at the Olympics, which dropped their record to 53-4 in games with established NBA players on the roster. Team USA did have a 10-point lead in the third quarter, but of course, this would later go to waste. On the bright side, USA are heavy favorites. According to Bovada’s futures odds for men’s basketball, Team USA have -350 odds of winning the gold on Friday, and these odds are better than Team France. They are listed at +140.

Moreover, USA’s projected starting lineup for the final game consists of Damian Lillard, Devin Booker, Jrue Holiday, Kevin Durant and Bam Adebayo. In the team’s 97-78 victory over Australia, small forward Durant once again led the team on the scoreboard, finishing with 23 points, nine rebounds, two assists, two steals and one block in 30 minutes played. Booker had 20 points, three rebounds, one assist and one steal. Jayson Tatum was off his game against the Aussies, shooting 3-for-10 for field goals and scoring nine points in 19 minutes played. However, all those nine points came from three-point shots. Not to mention, the Americans out-rebounded the Aussies 44 to 29.

Furthermore, France’s projected starting lineup against USA consists of Guerschon Yabusele, Nicolas Batum, Evan Fournier, Nando de Colo and Rudy Gobert. In Team France’s 90-89 nail-biting win over Slovenia, de Colo led the team on the stat sheet, putting up 25 points, seven rebounds and five assists in 32 minutes played. Fournier, who recently signed a four-year deal worth up to $78 million with the Knicks, had 23 points, five rebounds and three assists versus the Slovenians. The French squeaked by because of their three-point shooting percentage (48 percent) and the fact that they out-rebounded the Slovenians 49 to 40. Though, Team France struggled to make close field goal shots, shooting 31-for-75 (41.3 percent) overall. The finale will be interesting to watch.

Team USA are 12.5-point favorites versus France. It makes perfect sense why they’re favored, but oddsmakers could be overestimating the point spread. Not only have the French already defeated the Americans in the first game, they are the best competition remaining for Team USA. The average Joe basketball enthusiast has to go back twenty years to find the last time these two teams faced off against one another in the final game. During the 2000 Summer Olympics in Sydney, Australia, USA defeated France 85-75 in the gold-medal game.

Team USA are also shooting better percentage-wise than they did back in July, when they first played France. In their first 83-76 tournament loss of the 2020 Tokyo Olympics, the Americans shot 25-for-69 (36.2 percent) from the field. This was a pitiful effort. Maybe they’ll look back on that loss in hindsight as a valuable learning experience. If Durant and Lillard can cover Fournier better this time around, the final will be USA’s game to lose. Having said all of this, expect the Americans to get their revenge on the French. A few bettors are predicting a smaller point spread, though.