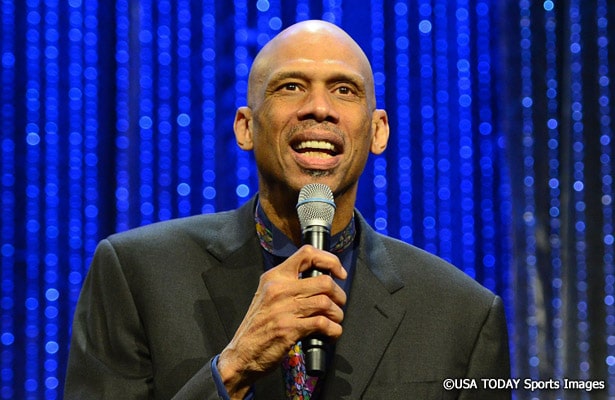 When Philadelphia 76ers rookie point guard Michael Carter-Williams destroyed the Miami HEAT on opening night to the tune of 22 points, 12 assists, 7 rebounds, and 9 steals, we all had a pretty strong sense that the kid was going to be special. The Rookie of the Year race has been rather uneventful in the several months since, as no one has really put up big numbers as consistently at Carter-Williams, and at this point in the season he’s averaging an impressive 17.3 PPG, 6.3 APG, 5.3 RPG, and 2.0 SPG.

Those are really nice rookie numbers, but incredibly, he’s not even having one of the fifteen best rookie seasons in the history of the league. There have been some unbelievably excellent rookies over the years, so as special as MCW has been, he’s just had a lot to live up to.

#5 – David Robison, San Antonio Spurs (1989-1990)
24.3 PPG, 12 RPG, 3.9 BPG
After putting off the start of his NBA career to serve in the U.S. Navy, Robinson blasted onto the scene in 1989 and kicked off what would be a statistically dominant NBA career with style. In that first season, Robinson helped the Spurs win 35 more games than they did the year before, which is a record that still hasn’t been topped. He was named to the NBA All-Defensive 2nd Team that season, as well, which makes sense considering how many shots he blocked. Those 3.9 BPG is one of the best outputs in that category for a rookie in the history of the game.

#4 – Lew Alcindor, Milwaukee Bucks (1969-1970)
28.8 PPG, 14.5 RPG, 4.1 APG
There was never any question that the player who later be known as Kareem Abdul-Jabbar would be awesome, but his first year in the NBA was not only a good one for a rookie; it was a good one for anybody. He immediately proved himself as one of the league’s top scorers and rebounders, and that kind of dominance helped instigate a 29-game turnaround for the Bucks that first season in Wisconsin.

#3 – Larry Bird, Boston Celtics (1979-1980)
21.3 PPG, 10.4 RPG, 4.5 APG, 41% 3PT
Up against fellow rookie Magic Johnson, Bird won 63 of 66 possible Rookie of the Year votes in 1980, which is a testament to just how good Bird was in his rookie campaign. The Celtics won 32 more games with Bird on the roster and even made it all the way to the Eastern Conference Finals, which is likely why he was added to the All-NBA First Team as a rookie. That’s something that doesn’t happen very often, which is why he’s so high on this list.

#2 – Oscar Robertson, Cincinnati Royals (1960-1961)
30.5 PPG, 10.1 RPG, 9.7 APG
These numbers are ridiculous, obviously. Not as ridiculous as the year he actually did average a triple-double, but coming 0.3 assists per game away from pulling off the feat in a rookie season is pretty hard to believe. He, too, was an All-NBA First-Teamer and also won the All-Star Game MVP award that first season. It was a monster year for a monster player, and clearly one of the best rookie campaigns ever.

#1 – Wilt Chamberlain, Philadelphia Warriors (1959-1960)
37.6 PPG, 27 RPG
Wilt is one of only two players in league history to win both Rookie of the Year and league MVP in the same season, but the other guy, Wes Unseld, was nowhere near as dominant as Chamberlain was in 1960. Not only is 27 rebounds a game the most ever for a rookie, it’s also the second-highest season average ever. It’s not surprising that Wilt put up huge numbers from the get-go, but by today’s standards, a post player putting up half of these numbers would be a serious Rookie of the Year candidate. This was one of the most insane statistical seasons ever, and a rookie was responsible for them.

There have obviously been a huge number of talented NBA rookies over the years, so what Carter-Williams has done this season should not be minimized. Still, the club he’s in features some really elite talent, so it’s a hard Top 5 (Top 20, really) to crack.

With an excellent crop of rookies due up next season, perhaps there’s room for this list to expand. For 2013-2014, however, the best rookie aren’t quite up to snuff with the best rookies of all time.