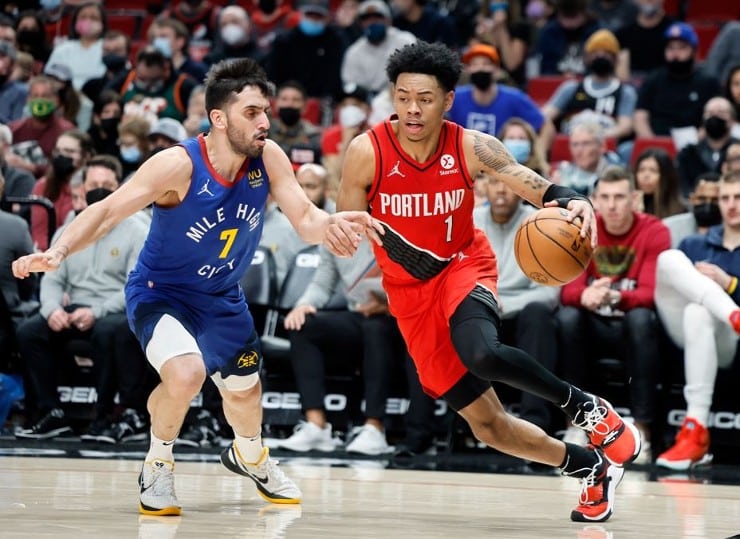 Portland Trail Blazers guard Anfernee Simons is seeking his first All-Star selection of his NBA career. Simons was selected 24th overall by the team in the 2018 NBA Draft.

During NBA Media Week, the fourth-year guard was asked about his short-term and long-term goals. Simons told reporters, “Personally, I want to be an All-Star. That’s one of my personal goals.”

Per multiple NBA betting sites, sportsbooks are showing bottom-15 odds for the Trail Blazers winning the championship in 2023. Nonetheless, some oddsmakers are anticipating another playoff appearance in the Western Conference.

Anfernee Simons on goals for this season now that he's gotten a new contract: "Personally, I want to be an All-Star. That's one of my personal goals."

Not to mention, in a 3-2 decision, Simons won the 2021 NBA Slam Dunk Contest. The guard attempted to kiss the rim as he dunked the ball, but he was unable to kiss it. Regardless, the dunk by itself was enough to win.

Last season, in 57 appearances and a career-high 30 starts, Simons had the best season of his professional playing career. He averaged 17.3 points, 2.6 rebounds, and 3.9 assists per contest.

Head coach Chauncey Billups gave the guard increased minutes as well. Perhaps it was a step in the right direction. He averaged a career-high 29.5 minutes played per game.

“A lot of people don’t realize how long he’s been in the league,” explains Simons. “His versatility is something we’ve never had before. His ability to guard 1-5, offensively stretch the floor. It’s going to pay dividends to how me and Dame [Damian Lillard] play.”
If Lillard, Simons, and Grant stay healthy next season, the Trail Blazers will return to the playoffs. And if Anfernee Simons has an even better season, he’ll receive his first All-Star selection in 2023.
Maybe he’ll become an All-Star reserve. Last season, not one Trail Blazer was selected to participate in the 2022 All-Star Game. Lillard dealt with lower abdominal tendinopathy, causing him to miss most of the season.