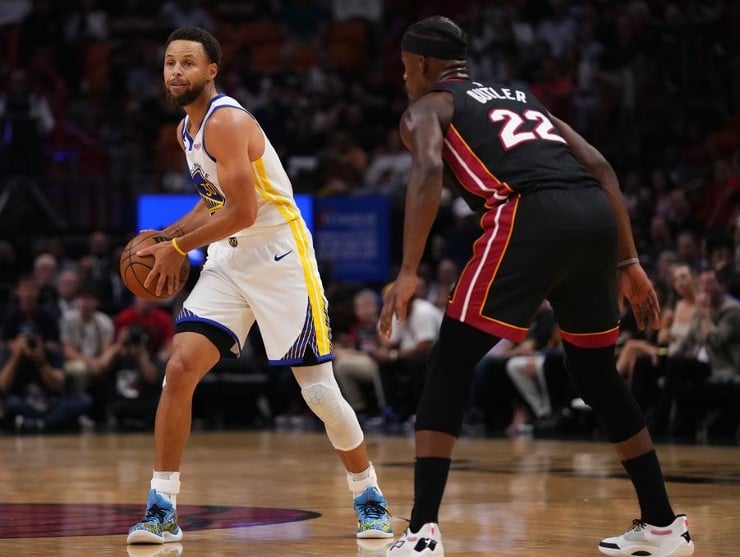 On Tuesday night, Stephen Curry was convinced the officials made a bad call late in the fourth quarter of the Golden State Warriors’ 116-109 loss to the Miami Heat.

With 1:39 remaining in the fourth quarter and the Heat up by three, Jimmy Butler was called for a foul while trying to block Curry’s 3-point attempt. Butler made contact with Curry’s fingers, leading to an air ball.

Per multiple NBA betting sites, the Warriors still have the third-highest odds to win the championship in 2023. However, some sportsbooks show better odds for the Boston Celtics and Los Angeles Clippers.

Heat coach Erik Spoelstra then decided to challenge the call. As a result, Spoelstra won the challenge, and the call was overturned. Down by three and losing possession, it was a crucial call for the Warriors.

After the game, Curry discussed his thoughts on the outcome. “It was an awful call,” explained the eight-time All-Star. “What did you think I was going to say?

I was walking to the free-throw line, thinking I was going to get three free throws and even the score with a minute and some change left.”

Curry also thought Butler made more than “high-five” contact. “It was a tough one,” continued the Warriors guard. “I clearly felt a lot of contact. I don’t know what they saw besides the high-five contact they talked about.

But you got to be allowed to finish your motion. That’s what I felt like. Especially when you slow it down to slo-mo, it’s pretty clear there was a lot of contact. But what do I know about calls?”

Steph believes it was an "awful call" to overturn the foul on his 3-pointer pic.twitter.com/xzvmWZvJrz

Of course, Curry finished his performance with a triple-double. The guard amassed 23 points, 13 rebounds, and 13 assists in 35 minutes of action. He finished 7-of-14 shooting from the field and 4-of-10 from beyond the arc.

Even if the officials didn’t overturn the call, this was not a game the Warriors deserved to win. They were outscored 30-15 in the fourth quarter. Klay Thompson and Jordan Poole were also held to under 20 points.

In addition to finishing with 20 turnovers, Golden State shot 36.7% from outside the arc. Now, they’re working towards snapping a three-game losing streak. The Warriors play the Magic on Thursday night at 7 p.m. ET.