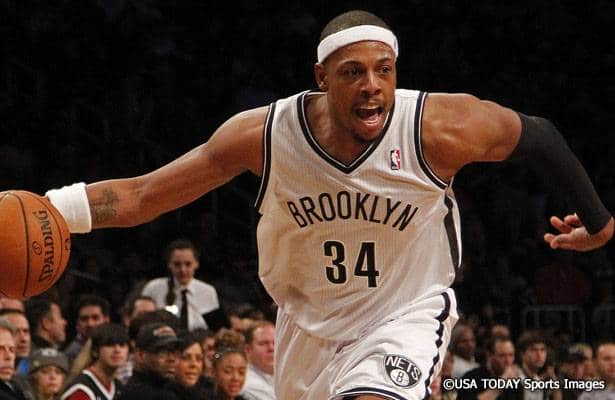 The slow, methodical lyrics blared through the TD Garden as images of Paul Pierce emerged on the Jumbotron above the parquet. Fifteen years of history, infamous moments and a triumphant championship would be captured in a matter of minutes in front of over 18,000 people, including the future Hall of Famer himself.

On Sunday, Pierce returned to the place he called home his entire NBA career for the first time since being traded to the Brooklyn Nets last summer. Cheers and emotions flooded the building as the former Celtics captain received a hero’s welcome in front of the crowd he energized since being drafted by the organization in 1998.

Accompanying him was Kevin Garnett, his fearless teammate of seven seasons who had been sent to the Nets also as part of the mega deal. Garnett, who at one point seemed to be a member of the Minnesota Timberwolves for life, breathed new life into the Celtics franchise when he was traded to Boston in 2007. Together, they made their first trip back to the arena where they had captured the 2008 world championship and come heartbreakingly close to winning more.

In a league where cities can be mere pit stops for many players and uniforms are swapped regularly, Pierce’s tenure in Boston is one that will be hard to match in years to come. For Garnett, he immediately embraced a new fan base and made it his own in the second chapter of his career.

The saying goes, basketball is a business. And it is. That’s the reason why Pierce and Garnett are wearing Nets jerseys this season. But for one day, they sent a reminder of how special the game can be when the place you play truly feels like home.

See these 10 memorable quotes from Pierce and Garnett’s return to Boston.

Pierce: “I really just tried to focus and get back to the hotel and try to get some rest and [I] couldn’t think about anything but today really, it was even hard for me to sleep. Laying in a downtown hotel in Boston when I’m used to being at my house, getting into the arena, coming in the backside and making a left instead of a right, everything was so different. And it was great, though.”

Garnett: “[This is] by far the hardest day that I’ve had to focus. This is bigger than Minnesota. Even when I went back to Minnesota, Minnesota wasn’t like this.”

Pierce: “I was telling Kevin and everybody this was the toughest game I ever had to play—tougher than any championship game or any Game 7. This game was just really hard to focus and concentrate on what was at hand. At the end of the day, we had a game to play but it was so hard to really focus. I saw so many friends, so many people I’ve known for years. … It was hard to really get into my routine. You have a routine when you come and get ready for a game and it never settled in. You thought about the time, the friendships, the relationships, and it was just, you get showered with love the whole game. You look up and see so many Kevin jerseys, my jerseys, posters, and it’s every second you are on the bench and in the game people were calling your name. I’m happy we got it over with and I can go back to playing basketball right now.”

Garnett: “This was over the top. … What comes to mind is unbelievable. I didn’t expect anything like that for myself. Shows the first class, shows the type of organization that this is and the appreciation from this organization for you, and I couldn’t put it into words. Paul and I were joking before the game who was going to tear up and drop a tear. I had lumps in my throat and I kept them under control and I focused as much as I could on the game and not take away from it, but man this was over the top. I couldn’t put that into words.”

Pierce: “That’s pretty much what the [tribute] videos showed … You build so much, not only on the court but in the community. I have relationships with organizations in the community that I built, been able to change different lives, being an inspiration in this community and a lot of that you thought about. I’ve seen a lot of the kids I brought to games and that’s what I think matters the most to me, the lives you can change. The basketball is great and understanding you’re a role model and it made me think of being an inspiration in the community here.”

Garnett: “This is not even close [to the atmosphere of a big game]. It’s not even close. The impact of people and how much we’ve impacted their lives, not just kids but grownups, just the culture here. You come here and one of the first things [Celtics VP of Media/Alumni Relations] Jeff Twiss tells you, he takes you through the library where he shows you all the history here and you feel that responsibility. To come back here and be showered like this it’s not even close, not even close.”

A Message to the Fans

Garnett: “The New Englanders and everyone whose ever supported me here and been nice to me and my family, obviously they didn’t have to be, I just want to say thank you all. I appreciate that from the bottom of my heart.”

Garnett: “We’ve just seen Baby (Glen Davis) a couple weeks ago, the new year we saw Perk (Kendrick Perkins), we got to see Doc (Rivers) and some of the guys who are still around. Even when you see them, those memories, remembering that coach, remembering that hard work, what was invested in and created here throughout the six years I was here. It’s always going to be what it is. I think we’ll always bleed green as long as we’re playing basketball and as long as we’re living. Even when they bury us six feet, this is what it’s going to be.”