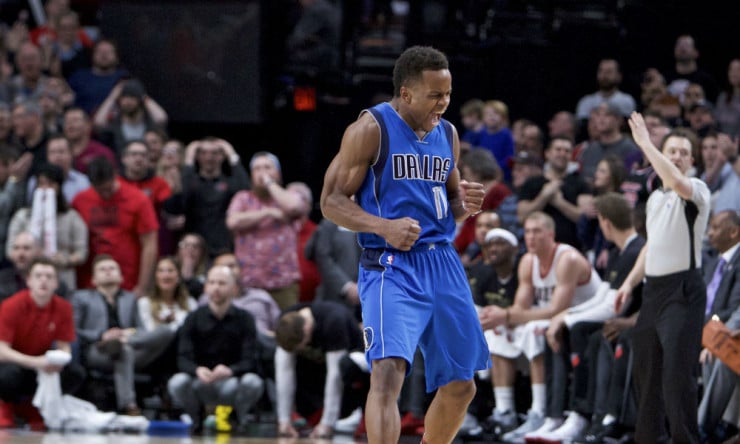 Although the two will compete for minutes at the point guard position when the Dallas Mavericks begin training camp in late September, second-year standout Yogi Ferrell and rookie first-round draft pick Dennis Smith Jr. could also see time on the court together during the 2017-18 season.

Teaming together to lead the Mavericks during the MGM Resorts Summer League in Las Vegas last month, Ferrell and Smith pushed the Dallas team into the semifinals of the tournament while manning the starting backcourt. Ferrell averaged 13.3 points, 3.3 rebounds, 3.3 assists and 2.2 steals during the Mavs’ six games, picking up where he left off at last season after earning a spot on the NBA’s All-Rookie Second Team. Meanwhile, Smith earned a spot on the All-NBA Summer League First Team, averaging 17.3 points, 4.8 rebounds, 4.2 assists and 2.2 steals per outing as the Mavericks finished with a 5-1 record. The two cat-quick guards could now continue to find themselves playing together during the ’17-18 campaign. And after seeing success alongside Smith in the backcourt, Ferrell admits that he’s excited to see what the duo could accomplish during the upcoming season.

“I mean, sometimes I don’t have to do everything, so I definitely like that,” Ferrell said of playing alongside Smith during summer-league play. “I can play off the ball a little bit, and I can knock down open shots. You know, I don’t have to go out and kill myself every single play by bringing the ball up when they’re pressuring me, so it’s been good playing with Dennis.”

“I’m just trying to tell him to play with pace,” Ferrell explained of his relationship with Smith. “He’s quick and fast just like I am, but he doesn’t have to play fast all the time. He can switch speeds, knowing when to go fast and know when to slow down. So, I’ve just been trying to help him with that so far.