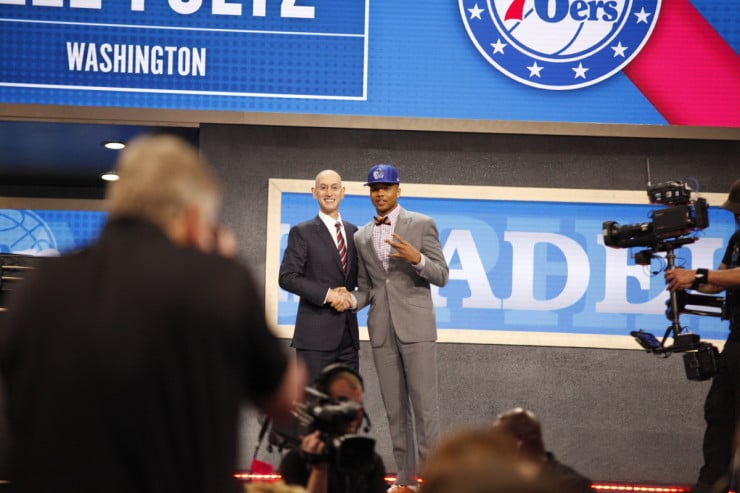 With the No. 1 overall pick in the 2017 NBA Draft, the Philadelphia 76ers selected point guard Markelle Fultz from the University of Washington.

Fultz, 19, will join Joel Embiid, Dario Saric and Ben Simmons as part of a young 76ers core that could terrify the NBA for many years to come. As a freshman, Fultz averaged 23.2 points, 5.7 rebounds, 5.9 assists, 1.6 steals and 1.2 blocks per game for the Huskies. Despite missing out on the NCAA tournament, Fultz managed to shoot 41 percent from three-point range and his offensive game was clearly advanced for a teenager.

While the 76ers’ future successes will greatly hinge on the long-term health of Embiid and Simmons, Fultz’s explosive scoring abilities are worth the price of admission alone. At 6-foot-4, Fultz is an elite athlete and often scored at Washington by blowing past slower defenders or shooting over the top of any smaller ones. Fultz’s offensive skills should translate quickly to the professional level as well, particularly so with all the floor-spacing talent around him.

Fultz will need to improve defensively if he wants to keep pace with some of the best guards in league history each and every night. However, with the shot-blocking prowess of Embiid protecting the rim behind Fultz, his transition on that side of the ball could move smoother than expected.

Of course, Fultz lands in Philadelphia just a few days after the 76ers traded the No. 3 overall selection and the Los Angeles Lakers’ 2018 first round pick (with protections) to move up two spots. While the 76ers have considered starting Simmons as a point forward in the past, the opportunity to snag a potential franchise cornerstone in Fultz was too good to pass up.