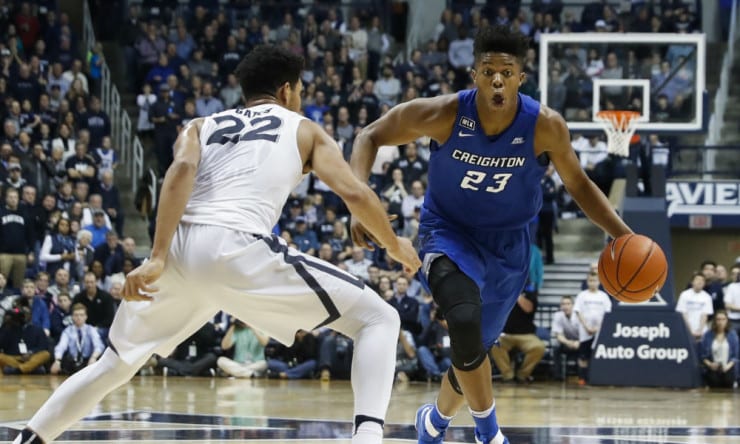 It only took five minutes for the 2017 NBA Draft to have its first blockbuster deal go through. With rumors of Jimmy Butler being on the block, the Timberwolves front office decided to be proactive and reunite the All-Star guard with his old coach Tom Thibodeau.

The experience is welcome for Minnesota, whose team was the third-youngest in the league last year. It also brings a defensive presence along the way to pair with Andrew Wiggins and Karl-Anthony Towns. In the trade, the Wolves swapped their seventh pick for the 16th pick and sent Kris Dunn and Zach LaVine to Chicago.

With the 16th overall selection, Minnesota took Creighton center Justin Patton. He was the first true center to get picked on the night.

In his one and only year with the Jays, Patton displayed his best abilities as a shot blocker and in the post. He has great foot work down low and can finish with ease (67 percent from the field) when given the opportunity.

Standing at 6-foot-11, Patton has the height of an NBA big man. Weighing in at only 230 pounds, however, he will need to bulk up and get stronger to be able to hold his ground with most centers in the league.  As far as his jumper goes, he showed that he can step out and knock down the trey if needed. But remember, it’s a small sample size, as he only took 15 attempts total on the year.

A raw prospect, Patton’s weakness is getting to the line and knocking down free throws, as he only shot 52 percent from the charity stripe on only two-and-a-half attempts per game.

As far as the fit with the Wolves goes, Patton will probably be coming off the bench and learning behind one of the game’s best in Towns. He’ll probably see a decent amount of playing time, especially with the release of Nikola Pekovic and Cole Aldrich’s role diminishing.