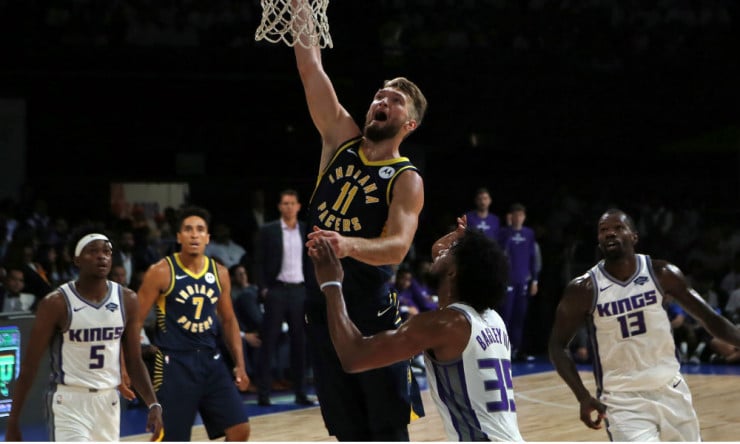 The Indiana Pacers are already making waves before the NBA Trade Deadline and next up could very well be their two-time All-Star, Domantas Sabonis. Indiana recently traded Caris LeVert to the Cleveland Cavaliers and have made it know almost all year that they are open for business when it comes to this personnel. With all of this in mind, it makes sense to look at the three best Domantas Sabonis trade destinations ahead of the NBA Trade Deadline.

The Sacramento Kings are a team that has been in NBA purgatory for years now. They’ve also been considered sleepers in the Ben Simmons sweepstakes. If Simmons is not an option, then Sabonis would be a nice consolation prize. The Pacers will probably want one of Buddy Hield or De’Aaron Fox, both of which Sacramento wants to retain, but a deal could still possibly get reached with the right pieces involved.

Boston has been rumored in trade talks with the other Indiana big man, Myles Turner, a couple of seasons now. However, a Domantas Sabonis trade to Boston would be a good fit as well. Sabonis would form a nice trio with Jaylen Brown and Jayson Tatum and his versatility would still help Boston space the floor. Adding another triple-double threat to Boston’s potent offense would be a scary thought for the rest of the league.

If Los Angeles is dead set on dealing Russell Westbrook and the Pacers just want to get fans in seats, then a Domantas Sabonis trade to the Lakers could be in the cards. Obviously, more assets would be involved, but Sabonis would be an excellent fit alongside a frontcourt that already possesses LeBron James and Anthony Davis. It is no secret that the recipe to success for a LeBron-led team is to surround him with shooters and Sabonis fits that bill. All in all, wherever Sabonis lands, someone will be getting a solid and underrated All-Star to add to their roster.