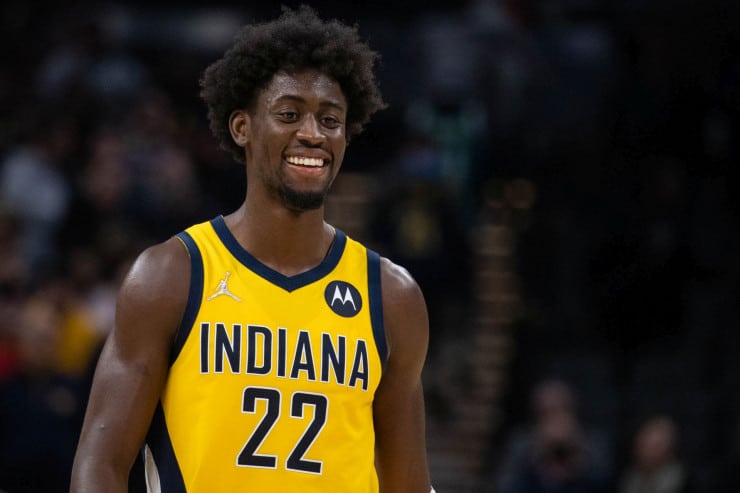 Nearly an hour before the Indiana Pacers and Cleveland Cavaliers tipped off at Rocket Mortgage FieldHouse, the two teams agreed to a Caris LeVert trade. As the Cavaliers prepare for a postseason push, the acquisition of LeVert ahead of the NBA Trade Deadline will be a valuable one.

Indiana gets valuable assets in exchange for LeVert as they prepare to retool their roster. It has been a difficult season for the Pacers, who have been ravaged by injuries once again.

LeVert is the only active player involved in this deal, but Ricky Rubio is heading to Indiana but remains out for the remainder of this season. The 31-year old is in the final year of his contract. Several draft picks also exchanged hands in this deal, with the Pacers getting two quality picks for the talented wing player.

Without many sellers at the NBA Trade Deadline this season, the Pacers were able to get a solid return from the Caris LeVert trade. LeVert has been in and out of the lineup for most of his tenure in Indiana. His last game with the team was a 42-point performance against the Chicago Bulls on Friday. LeVert going back home to Ohio had been one of the strongest rumors ahead of the trade deadline, and now it has come to fruition.

The Cavs have been arguably the best feel-good story of the season, as they continue to win games and stay near the top of the Eastern Conference standings. The city will host All-Star weekend later this month and will have at least one member of the team represented, in point guard Darius Garland. The first-time All-Star could be joined by Jarrett Allen, who has had a phenomenal season.

LeVert is thrilled with the chance to return to his Ohio home and join an emerging contender with Cavs. He gives Cleveland a significant wing player who'll be eligible for an extension this summer. Pacers get Cavs first-round pick and a Houston second that'll be in low 30's.

Allen will reunite with his former Brooklyn teammate, as LeVert gives them a much-needed offensive weapon on the wing. Aside from Garland, Cleveland has largely been carried by their crop of talented big men with Allen, rookie Evan Mobley, Kevin Love, and Lauri Markkanen. Without much depth in the backcourt, the team has addressed their biggest need ahead of the trade deadline on Thursday.

The $8.9 million Disabled Player Exception for Cleveland is now voided with this trade. LeVert has two years left at $17.5 million and $18.8 million and will be extension eligible this offseason. Cleveland’s total salary will now be $125.5 million.

Cleveland ranks 17th in offense this season but is third in defensive rating. The addition of LeVert could make them one of the best teams on both sides of the ball, as they rank just 23rd in points per game. LeVert heads to his third team as he is finally getting back to full strength.

Just as the Cavs were one of the best success stories this season, LeVert’s comeback story has been even better. After the trade from Brooklyn to Indiana, doctors found a tumor during his physical that sidelined him indefinitely. Now fully recovered, he has returned to form and has been playing very well. The 27-year old is averaging 19 points, 4 rebounds, and 5 assists in his 39 games this season.

Interested betting on the Indiana team? – Don’t miss out on reading our guide about sports betting in Indiana first!