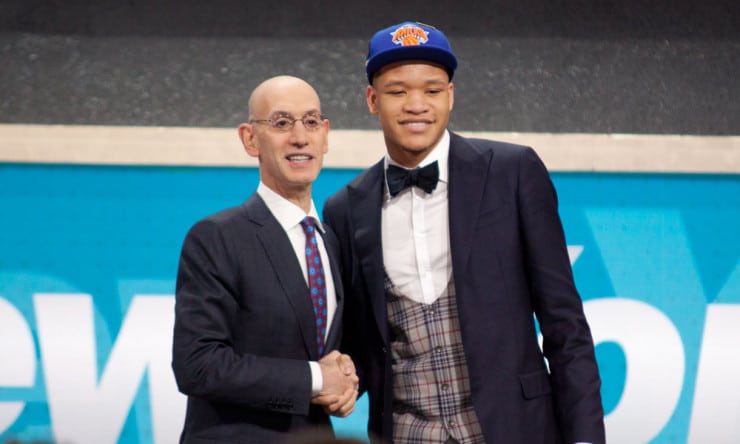 With the ninth selection in the 2018 NBA Draft, the New York Knicks selected Kevin Knox.

The Knick entered the draft needing to walk away with a prospect who, at the very least, would be a solid rotational player. With Knox, they got exactly that.

During the predraft process, Knox saw his stock rise pretty dramatically. The Knicks selected Knox with their pick despite the fact that Michael Porter, Jr. was on the board. Knicks fans in attendance were chanting for Porter to be the team’s selection, but the franchise opted to pin its hopes on the one-year man from Kentucky.

In his lone season playing for John Calipari, Knox, who is listed at 6-foot-9, averaged 15.6 points per contest along with 5.4 rebounds and 1.4 assists. He shot 34.1 percent from behind the three-point line and brings a fair amount of offensive versatility playing alongside Kristaps Porzingis.

In hindsight, Knox probably had an idea that he was headed to New York. During his availability session the day before the draft, he spoke glowingly about Madison Square Garden and said he’d welcome the challenge of performing under the bright lights.

He’ll now have the chance to prove it.

Heading into the draft, there was a fair amount of discussion pertaining to the Knicks and the fact that, of all teams, they seem to have the most on the line in this year’s draft. While that may seem a bit dramatic, the truth of the matter is that Porzingis is on record as having let the team know that he is willing to forgo signing a rookie extension and instead wants to see the franchise make immediate moves to turn their fortunes around.

With the 2018 draft, newly installed general manager Scott Perry made his first selection as the head honcho in New York, and with his track record littered with examples of his fingerprints being on high value picks, Knox will now have the opportunity to be a positive entry on Perry’s resume.