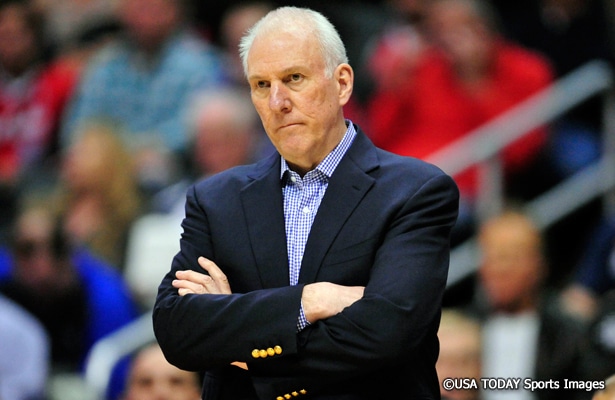 The Best Head Coach Opens Up

The San Antonio Spurs don’t have flashy players who inspire highlight reels and their players don’t seek the spotlight by doing endless endorsements for everything from fast food to underwear. In fact, Tim Duncan, arguably the best power forward to ever play the game, would just as soon be left alone by everyone, including (especially) the media. Because of this, the team often goes overlooked.

How, then, do the Spurs manage to be one of the NBA’s best teams every season? Why are teams across the league looking to poach their talent, both from the front office and from Gregg Popovich’s coaching staff?

The answer is simple, and it’s just one word: Culture.

Are The Pacers In Trouble?

Amusingly several years ago former Orlando Magic GM Otis Smith joked about whether he’d make a major trade at the deadline saying that team chemistry was a unique and fragile thing. Smith opted to hold the line for the most part, acquiring backup guard Rafer Alston from Houston and resisted making a big splashy trade, despite what seemed like a pressing need for one. His team went on to the 2009 NBA Finals. That next summer Smith started to tinker and the whole thing fell apart.

The Indiana Pacers had a good thing going. They were crushing teams on both ends of the floor and looked all but unbeatable, especially if they got home court, which four weeks ago seemed like a forgone conclusion. With the gap between the second place Miami HEAT and the first place Indiana Pacers now just 1 ½ games the Pacers are looking more and more beatable with each passing loss. The team that seemed like the favorite to unseat the Miami HEAT seems a little lost as of late and it may be due to the tinkering the team did at the trade deadline.

We’ve been chronicling the MVP and ROY races throughout the season, and figured it was time to take a look at the Defensive Player of the Year candidates as we head down the playoff stretch. Even if big men aren’t appreciated nearly as much as perhaps they should be these days, they’ve dominated this category for the better part of 20 years.

Outside of Metta World Peace (Ron Artest) in 2004, a non-C/PF hasn’t won this honor since Gary Payton swiped the award way back following the 1995-96 season. While there are several guards worthy of recognition for their defensive efforts this season, this still might not be the year to expect that trend to end.

As the proverbial “last line of defense,” big men often take this award due to how much they can influence that side of the court with rebounds and blocks, as well as being both an on-ball and secondary defender. Without further delay, here are some of the candidates we expect to be in the discussion

The Charlotte Bobcats weren’t supposed to be in the Eastern Conference’s playoff hunt in mid-March. After all, this team isn’t too different from the dreadful squads that had lost 120 of 148 games over the last two seasons – aside from the addition of free agent Al Jefferson and the hiring of Steve Clifford, the team’s third head coach in three years. Significant progress wasn’t expected in Charlotte. If anything, they might improve their record by a few wins, which seemed like a bad thing since it would hurt their chances of landing a potential franchise-changing prospect at the top of the 2014 NBA Draft.

However, the Bobcats have exceeded all expectations this season thanks to the tremendous play of Jefferson, the extraordinary coaching of Clifford and the impressive development of Kemba Walker. The team is currently 29-34, which puts them in the East’s seventh seed. Sure, the conference’s abysmal competition has certainly contributed to Charlotte’s turnaround, but the on-court product has really improved as well. The Bobcats have been playing particularly well as of late – they’ve won seven of their last 12 games and have quality victories over the Indiana Pacers, Memphis Grizzlies, Dallas Mavericks, Golden State Warriors and Los Angeles Clippers.

It’s apparently the time of year when teams are interested in honoring former players by retiring their jerseys, with Zydrunas Ilgauskas and Allen Iverson both seeing their numbers head up to the rafters over the course of the last couple of weeks.

Not all players that have their jerseys retired are quite so clear-cut, though. Over the years there have been some really questionable players who have had their numbers retired. Assuming that this is an honor bestowed upon players so legendary that no one else should ever get to wear their number, it’s a small miracle that the players listed below have jerseys in the rafters.

Here are the most questionable jersey retirements in the NBA:

Gearing Up For Playoff Stretch

As the 2013-14 regular season  winds down, the playoff chase has started to increase in intensity. The Eastern Conference has been dominated all season by the Indiana Pacers and Miami HEAT, but the Chicago Bulls and Toronto Raptors have continued to gain momentum as the season has progressed.  Out in the Western Conference, things are a bit more balanced from top to bottom with six teams on pace to win at least 50 games. Think about this, the Minnesota Timberwolves and Phoenix Suns would be playoff teams if they were in the Eastern Conference but both squads are currently on the outside looking in at the postseason.

For now, let’s take a look at the race for a playoff berth in the Eastern Conference:

The Indiana Pacers are slowing down and the Miami HEAT are lukewarm. Out East, the top contenders each turned in the worst weeks of their respective seasons while the Oklahoma City Thunder have quietly lost five of their last eight games.

The result? The San Antonio Spurs enter play this week with the best record in the NBA. Some things, amazingly, do not change.

But our top team out West? It certainly has.

The Spurs are the top team out West, but they do not top our Power Rankings this week. That designation belongs to the third-seed Houston Rockets, who simply left us no choice. It would be unfair and irresponsible to not dub the Rockets the cream of the crop after Sunday night’s brilliant and gutsy 118-113 win over the Portland Trail Blazers. The Rockets are a league-best 23-6 in 2014 and just beat up on the Pacers, HEAT and Blazers in the same week. Throw in the fact that they are 3-0 against the Spurs this season and the decision is clear.

The reign atop may be short-lived, though, as the Rockets will embark on a tough three-game trip this week, traveling to the Thunder, Chicago Bulls and HEAT. It is a difficult journey, indeed…

Who Are The Keepers: Atlanta Hawks

The Atlanta Hawks have made the playoffs since 2007-08, but in none of those years did they have a realistic chance of winning the championship.  In the summer of 2012, newly hired GM Danny Ferry began the process of dismantling those teams, trading away Joe Johnson’s enormous contract to the Brooklyn Nets.  A year later, Ferry made no attempt to re-sign power forward Josh Smith, instead replacing him with a short-term two-year, $19 million contract for Paul Millsap.  Ferry also re-signed Kyle Korver and matched the Milwaukee Bucks’ offer to point guard Jeff Teague.  Before Al Horford suffered a torn pectoral muscle on December 27, Atlanta was chugging along toward the de rigueur middle seed and second-round noncompete.  Now the Hawks are desperately clinging to the eighth playoff seed, but they do so while maintaining flexibility and assets for the future.

Ball Don’t Lie and Neither Does Wallace as Pistons Coach

The outbursts have been replaced by outpourings of knowledge; the volume of his voice listened to intently as opposed to being blocked out in past years.

With a new role in the next stage of his career, Rasheed Wallace has transformed from agitator to mentor, dominating foe to willing coach.

“Playing against him, he was always going to trash talk a little bit,” said Charlie Villanueva. “I used to always try not to feed into it, but it was hard not to. He was just constantly talking. Now as a coach, you’ve got to respect him. His resume speaks for itself.”

Last April Wallace finished his NBA career after 16 years in the league, compiling a total average of 14.4 points and 6.7 rebounds per game. During this time he won a title with the Detroit Pistons in 2004 and earned four All-Star selections.  In September he joined the staff of the Pistons, where he had spent more than five seasons, as a player development coach. Just months later Wallace, 39, was promoted to an assistant coach role by interim head coach John Loyer following the firing of former head coach Mo Cheeks.

Los Angeles Lakers head coach Mike D’Antoni announced today that point guard Steve Nash will miss the remainder of the regular season, which has 18 games remaining in it for the Lakers. This comes just one day after the team announced that Nash’s backcourt mate Kobe Bryant would miss the rest of the regular season as well due to his a broken bone just below his left knee.

An ailing back is the culprit for Nash, who missed 32 games last year due to a leg injury and only played in 10 games this season. There has been a lot of talk about whether the Lakers will use the stretch provision on his contract, allowing them to spread out the $9.3 million remaining on his contract over the next three years. However, there is also some logic behind the Lakers keeping Nash on board and just being rid of his contract completely at the end of next season. The Lakers are considering saving their cap space for next offseason if they don’t land any big time free agents this summer, keeping Nash would eliminate another $3 million off of their books, if that is indeed the route the go.

With about a month left in the 2013-14 regular season, both the playoff and lottery chases are taking shape.

Looking ahead to the 2014 offseason, which teams will have cap room this summer?

After a look at the Southeast Division, where do the five teams in the competitive Northwest Division stand this offseason?

Would Dolan Stepping Aside Allow the Knicks to Step Forward?

Considering how consistently successful the New York Yankees were under the stewardship of owner George Steinbrenner during the final 15 years of his reign, it’s hard to imagine a time when the Yanks struggled as mightily as the latter-day New York Knicks. However, the decade of the 1980′s up through the mid-90′s represented a relatively dark time for baseball fans in the Bronx.

Although we now think of the Yankees as a flagship MLB franchise, it certainly wasn’t always that way. For the disappointing Yankee teams of yesteryear, spending exorbitant sums of money didn’t result in postseason success. Beginning in 1982, the Yankees failed to qualify for the postseason for 13 straight seasons.

The Yanks made headlines for all the wrong reasons during this drastically disappointing stretch. Steinbrenner devolved into a caricature, his misdeeds landing him on the back page of the New York tabloids almost daily. Ruling as an angry despot with an iron fist, “The Boss” (as Steinbrenner came to be known) had his employees scurrying in fear.