The path from the college coaching ranks to the NBA is littered with failures and retreats. For every success story, one can find multiple examples of one time up-and-comers who flamed out at the game’s highest level. Much like the thousands of players who have made the leap over the years, the thinning field of availability weeds out all but the elite’s elite – and often more quickly given the speed of NBA coaching turnaround.

So when a guy like Brad Stevens comes along, the league takes notice. Just 36 years old at the time of his hiring, Stevens spent over two full years as the league’s youngest bench boss until a couple midseason additions this year (J.B. Bickerstaff in Houston and Ty Lue in Cleveland) supplanted him – but his youth is only the tip of the iceberg.

Stevens was tasked with the post-Doc Rivers “rebuild” in Boston, but has been among the strongest driving forces in removing that oft-stigmatized term from any Celtics lexicon in a big hurry. A 25-57 rookie campaign quickly gave way to a 15-win jump in his sophomore season, a 40-42 finish that took those expecting Boston to pick in the high lottery by surprise. And even as the whole world wonders which big name the Celtics will eventually land with their treasure trove of assets, Stevens continues to eke remarkable showings out of relatively limited talent – a continuation of the team’s current 47-win pace would mark more than a 20-win increase in just two seasons, without the influx of a single franchise-altering superstar.

“Leading by example,” Celtics guard Avery Bradley told Basketball Insiders when asked about Stevens’ greatest strength in the locker room. “A lot of the things he does, I think [they] rub off on us. Him preparing for each game, we see how hard he works and it makes us want to go out there and not only be prepared for him, but be prepared for the team… At the end of the day we’re all a team, including the coaches. I respect that.”

Stevens’ tactical acumen is beyond reproach (more on this in a bit), but it’s this connection with his players that sets the baseline for success. Ask David Blatt how things work out for strategically strong coaches who can’t get along with their more handsomely paid and influential players; if the guys don’t buy in, even Red Auerbach isn’t getting a winner out of them. Stevens instantly established the rapport, aided by his youth and his own recognition that getting too familiar with guys not far behind him in age also wouldn’t accomplish much.

It can be tough to find publicly available evidence for this sort of thing from an external viewpoint; teams don’t release stats on player-coach chemistry like they do for points and assists, and there are so many moving parts and so much context to any similar conversation.

In Stevens’ case, though, a few glaring examples are hard to ignore. Isaiah Thomas, cast off by two different organizations in the last 18 months and labeled a locker room issue, has become the team’s driving offensive force and a first-time All-Star while putting any behavioral issues miles in the rearview. Jae Crowder, considered an afterthought in last year’s Rajon Rondo-to-Dallas deal, has been Boston’s best defensive player and the versatile swingman who makes much of Stevens’ tinkering possible (he also received low-key All-Star buzz). All Evan Turner heard about for roughly a half-decade was how disappointing his career was for a second overall pick, but he’s played a vital role and the fourth-most minutes for this Celtics team.

“The great challenge of coaching is that team dynamics always make it difficult, no matter what,” Stevens said. “You always have a lot going on on your team, and you’ve got to get a group of people to try to play as well as they can together. Every year, that’s going to be the greatest challenge.”

It’s become increasingly clear that Stevens is up to the task, including the next step in the process: Turning that player buy-in into a functioning system and, eventually, a winning team. Many inexperienced NBA coaches struggle with on-court minutiae for a number of reasons. Stevens had no such learning curve, and was immediately among the league’s most proficient here. A bit more continuity over the last couple years, something Stevens noted as a major positive for his group, helped him refine the edges here even more.

And now, in year three, there’s a real argument no coach in the world does a better job with all the in-game details that can make or break a coach’s career. The trust Stevens shares with his players allows him the freedom to tinker with lineups and rotations at his leisure, with the knowledge that everyone on the roster is comfortable mixing up their role and playing time. A look at his most-used lineups reveals his ability to mix and match units at an elite level, and a deeper dive into individual situations showcases a guy who is basically never out-maneuvered.

Far from struggling with some of the nuances of the tactical NBA game after the college leap, Stevens has instantly established himself as one of the strongest Xs and Os minds in the league. His play calling out of timeouts, particularly in end-of-game situations, is already compared in some circles to savants like Pop and Carlisle.

“He’s very smart with reading defenses, and knowing how teams are going to play and what they’re going to do,” said Gordon Hayward, a onetime Stevens disciple at Butler. “They beat us on a last-second shot last year. He’s just a really smart coach, and he always brings the best out of his players.”

The play Hayward referenced snatched the Celtics an 85-84 victory over the Jazz in Boston nearly a year ago, and is a perfect example of what separates Stevens from many of his peers in this category.

The play might seem standard at first glance, but let’s add a little context. First, an item the clip above doesn’t show: This was Stevens’ second consecutive timeout before the play began. He saw the defensive configuration Utah was in – most notably the fact that long-armed Rudy Gobert was stationed guarding the sideline inbounder, rather than his usual spot under the basket. The scheming began.

As the actual play got started, Stevens had Thomas clear out to the strong side corner, and simultaneously put Crowder, Bradley and eventual scorer Tyler Zeller into a three-man action in the key. Bradley and Crowder crossed each other, and then Zeller appeared to be in position to set a pick for Crowder, which would allow Jae to rocket up to the top of the key and receive a pass. 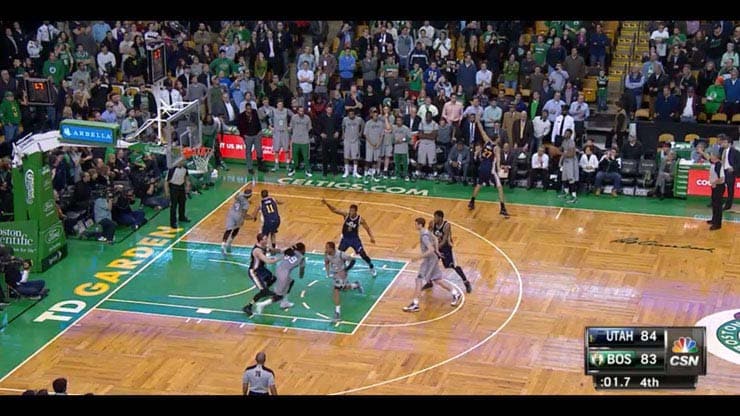 The Jazz switched the initial Crowder-Bradley cross, and Stevens was counting on their willingness to do so again for the Zeller-Crowder action – and of course, having studied up on Quin Snyder and Utah’s tendencies, he was right. 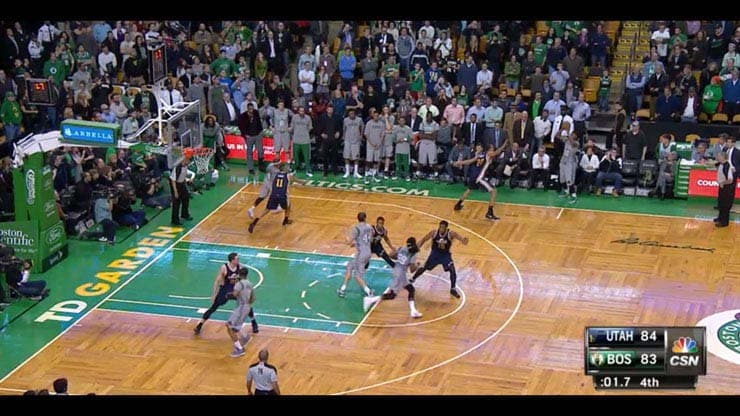 Snyder correctly assumed a guy like Derrick Favors (switched onto Crowder) was easily mobile enough to contest a wing for under two seconds. But the inverse here got lost in the hubbub; it was much harder for Rodney Hood to hold his own against a taller and heavier guy in Zeller, even for just a second or two. All Zeller needed to do was use his height advantage to catch and finish, and Stevens’ scheming (Thomas and Bradley to the corners, the knowledge that Gobert was guarding the inbounder) made this easily possible. 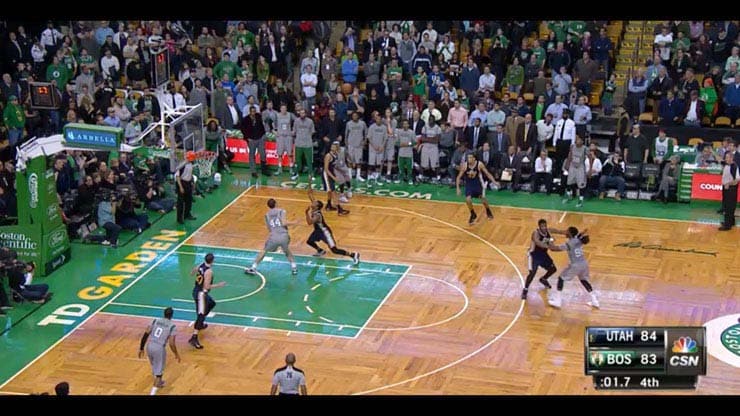 Maybe this seems easy as it’s written out in paragraph form – it’s anything but. Stevens is making multiple careful calculations about how the Jazz will react to each moment of this play, plus where he needs to put his guys to take advantage of it, all in a matter of a couple seconds. Even many of the best coaches in the game simply aren’t capable of this level of detail, and certainly not with the consistency with which Stevens busts out gems like these in big spots.

“I think that’s all overblown with me,” Stevens said of his burgeoning reputation as a high-IQ basketball coach. “I don’t think I have anything to do with that. I think we’ve got really good players that are really smart players. They [were] high-IQ players long before they got here. You look for high-IQ players, and savvy players, period. Because it’s a long year, you see a lot of situations – you have to change on the fly, you have to tweak on a dime.”

Alright, whatever you say Brad. It’s not you at all.

Sure, Stevens has a point to some degree – Danny Ainge and his front office team have indeed developed a heady core, one filled with versatile enough guys to do Stevens’ bidding. But every team in the league looks for smart players, and most have at least a couple; very few others are tossing out rewind-that-four-times beauties on a regular basis in big moments.

The best part? This might only be the beginning. It can be easy to forget that Stevens is still just two years and change into his run as an NBA coach. The guy isn’t even 40 yet! He’s talked openly about how things around the margins get easier every year with bits of continuity and comfort, and Ainge and Co. have yet to finalize what most assume will be a much more talent-driven roster at some point down the line. The Celtics have their man for the present, and quite possibly their safest asset for the future.