By The Horns? Inside Chicago’s Damaging Inconsistency

Even to an outside observer unaware of their recent struggles, the tension surrounding the Chicago Bulls would be palpable after just a few minutes around the team. The air is thick, from players to staff to traveling media. Interactions feel forced and everyone near the team is well aware of the myriad issues facing this group behind the scenes.

Coach Fred Hoiberg begins his media availability before a back-to-back against the Utah Jazz in Salt Lake City and is immediately besieged by a wall of negativity. The Bulls were taken to school by the Los Angeles Clippers the previous day and a brief respite from the stress after a routine win over the Lakers a couple days prior has evaporated entirely. ‘What’s wrong with this team?’ Hoiberg is asked. ‘What’s causing such a talented roster to underachieve in a year when many pegged them as the most legitimate challengers to Cleveland in the East?’ Focus, effort and consistency are buzzwords of the day, clearly themes Hoiberg is familiar with hearing at this point. It takes effort to remind oneself that this team is six games over .500, a win or two away from the conference’s third seed.

They’ve dropped to five games over .500 a few hours later, and in a fashion that serves as a fantastic microcosm of their recent struggles. An otherwise generally strong game is marred by spots of inconsistency, notably a collapse down the stretch as the Bulls blow a three-point lead with just over 10 seconds remaining before folding altogether in an overtime period where they score just three points. 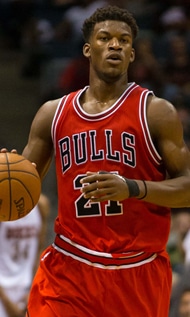 Tension has become outright frustration in Chicago’s locker room after the loss. Star Jimmy Butler and veteran Taj Gibson both sit, head in hands, for extended periods of time at their lockers, staring in turn at the ground or the ceiling. Hardly a word is spoken between teammates.

Derrick Rose is first to address the assembled media. He’s asked about the possibility of a players-only meeting, a subject with a healthy stigma around the league these days, and says it’s something he’d consider initiating in the next few days. Butler is asked what he can take away from that night’s performance:

The balance within a successful and competitive NBA franchise is delicate, and the Bulls are learning just how rough things can get when the scales are uneven. Public scrutiny has enveloped the franchise in recent weeks as prominent names like Butler and Pau Gasol have commented on indicators of a disconnect.

“You have to bring the intensity, the effort,” Gasol said following the loss to Utah. “Those are the things – the intangibles – that we [are] sometimes lacking. It happens sometimes, when teams are talented and they have a great level of skill: they forget about doing the little things that I think, in this league and this sport, make such a big difference.”

All parties outwardly insist the team remains united, but privately, it certainly feels like there are tension and fractured relationships within the organization. The locker room has become divided into cliques, per Basketball Insiders sources. One group, including Rose and injured center Joakim Noah, harbors lingering resentment over the handling of ousted coach Tom Thibodeau. Butler has struggled at times to establish himself as a team voice despite the support of Gasol, a reality that’s become public. Rose’s unprompted comments about free agency before the season certainly irked some in the franchise, and it’s not hard to infer that a few of those upset by the statements were guys he shares the court with – his camp and Butler’s have long been rumored to be at odds. The potential departures of Gasol and Noah this summer in free agency have only added to the strain.

Different teams react to these stressors in different ways, and for Chicago, the damage is embodied most in an utter lack of consistency. The broadest example can be found with a quick glance at their game log to this point, a streaky mess with at least one bad loss present for every strong win. But it can also be found within individual quarters and stretches, and even on a possession-by-possession basis.

“There’s no question we’ve been inconsistent,” veteran Kirk Hinrich told Basketball Insiders. “We’ve shown we can be really good… we just have to make sure we control the simple things – our effort, our execution. You’re not going to be able to control making shots every night, but come out with the right effort and the right mindset every night, and hopefully the consistency will follow.”

Unfortunately, the evidence indicates that the Bulls have struggled mightily to right their collective approach. Every team tends to allow more points in losses than in wins, of course, but Chicago’s discrepancy here is extreme; the 94.2 points per game they’ve allowed in victories versus the 109.5 they’ve hemorrhaged in defeats creates a 15-point chasm that’s among the five largest in the league (most teams allow roughly 8-10 more points in losses than wins, for reference). These figures match a trend that’s visible to the naked eye: The Bulls simply don’t come to play every time out, particularly on the effort-heavy defensive side of the ball, and the results on those off nights can get ugly.

More granular data gives a clearer picture of just how damaging the collective malaise has been at times. Defensive rebounding has been an issue, with the Bulls checking in as a bottom-10 team here most of the season. Worse yet, though, they don’t seem to be winning battles on the glass. Per Nylon Calculus data through late January, the Bulls are 24th in the league for “win percentage” on contested defensive rebounds – that is, they secure just 47.4 percent of defensive boards where both a Chicago player and an opponent are within rebounding distance of the ball. They’re just 5-11 when they collect under half of all available rebounds in a game.

Other indicators abound. The Bulls are drawing assists on over 58 percent of their made baskets in wins, a figure that drops to 54 percent in losses. A “my turn, your turn” dynamic often develops between Rose and Butler in big moments. As a team, Chicago has allowed opponents to shoot just 48.4 percent at the rim with a defender nearby, per Synergy Sports, second-best in the NBA. That drops to an ugly 52.6 percent in 21 losses, another instance where Chicago’s gap is among the largest in the league.

Many franchises look to their in-house veterans and leaders in times of crisis, but Butler thinks everyone on the roster is on the hook.

“Nah, it’s on everybody,” he said. “Everybody’s out there playing, not just the leaders. I think we’ve gotta stay in this together, it’s not on one person more than the other.”

With a fragmented locker room has come a lack of responsibility, a common consequence. The best team cultures are those where veterans and rookies alike can constructively criticize each other in the name of progress, where liability for on-court errors is internalized and turned into positive output. The Bulls have struggled with every step of this process.

“You have to have that,” Hoiberg said. “It has to be something where the guys can look at each other in the face, and be able to hold each other responsible and accountable when they’re not doing it on the floor, and to be able to take that.”

The direction of the franchise hangs in the balance as the current group tries to iron things out before it’s too late. Noah’s absence has hurt as much due to the sharp realization that he’s likely finished in Chicago as any on-court damage. The team’s frontcourt would be in the hands of Gibson, Nikola Mirotic and rookie Bobby Portis if Noah moves on and Gasol, as has been rumored, opts out of his final year this summer.

Trading Rose is a common topic to the casual observer, but the reality remains that he’s among the least valuable high-dollar contracts in the league. Moving him would almost certainly come at the cost of another asset, and might just be flat-out impossible for a player who, while well-intentioned, doesn’t seem to have realized that his MVP days are well behind him. Rival executives see Rose leading the Bulls in usage percentage by a healthy margin over Butler and Gasol, and justifiably wonder whether this will ever be a player who could positively impact a team as a secondary or even tertiary option.

The Bulls might be stuck with their main pieces for now, and the guys on the court are determined to make it work – at least publicly. Monday night’s negativity was accompanied by frequent assurances that common goals remain shared, intentions remain positive. The return of veteran Mike Dunleavy is highly anticipated, particularly by Hoiberg, who referenced stability as a specific benefit the savvy swingman can bring back into the fold.

A few good weeks could put these struggles in the rear view mirror. By the same token, a few more like this could damage things beyond repair. There’s still a chance to right this ship, and the path there is one best taken together.

“I think that’s how you stay positive, you continually have each other’s backs,” Butler said. “You stay in this [thing] together. And when you do, it’s going to turn around. We’ll figure it out, we’ve got a good team. We’ve just got to keep doing what we’re doing, change this thing around.”