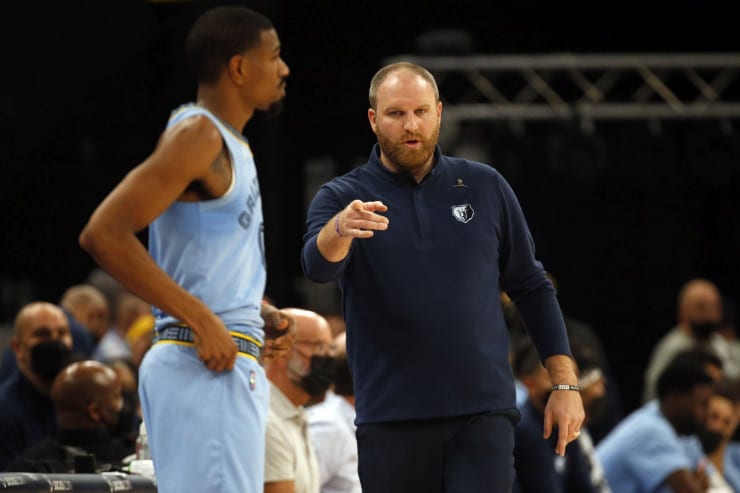 The annual Coach of the Year award gives credit to one individual for the success of an entire team. While there are several worthy candidates this season, Taylor Jenkins has taken the Memphis Grizzlies to new heights. Let’s take a look at the favorite in the NBA Coach of the Year odds, according to BetOnline Sportsbook.

Taylor Jenkins Rising in 2022 NBA Coach of the Year Odds

There are a lot of things going right in Memphis right now. The Grizzlies are currently third in the Western Conference, with a remarkable 32-16 record. The team is riding high, having won 13 of their last 15 games. They aren’t just doing it against inferior opponents either. They are 14-6 against sub .500 teams but also 18-10 against teams with winning records.

Memphis has been playing well in all facets of the game. The Grizzlies are top-ten in both offensive and defensive rating. They rank 4th in scoring and have the 7th best net rating in the league. The solid all-around play can be attributed to the talent on the roster. That is where Jenkins has really shined.

Ja Morant has gone from a 20-year old rookie to playing at an MVP level in his third season. His rise to stardom as the face of this franchise is well documented, but he is not alone. The emergence of Desmond Bane has him at the head of the table in the discussion for the Most Improved Player award. The growth and development of this roster can be seen on a nightly basis, especially when Morant missed a significant portion of the schedule early in the season.

One of the best examples of Jenkins’ coaching prowess has been the emergence of Jaren Jackson Jr. After somewhat failing to emerge into the All-Star caliber player that many envisioned when he was drafted, he is having a career year in Memphis. The versatile big man is averaging 2.2 blocks per game, which ranks 3rd in the league behind Myles Turner and Rudy Gobert.

Taylor Jenkins on the contributions of coaching staff: “Our coaching staff is second to none. I’m blessed to work with amazing people” — they do it by committee, and nothing changes with preparation. He said a lot falls on his shoulders, but he leans on his staff as well

Tyus Jones is another fine example of the work that Memphis and the coaching staff have done this year. The backup point guard is flourishing in his seventh season, averaging career highs in scoring, rebounds, and every shooting percentage category, which includes 94 percent from the free-throw line. Jones was a key cog for the Grizzlies when Morant was out of the lineup.

Others in NBA Coach of the Year Odds

Sometimes this award doesn’t go to the coach that has overachieved, but rather the team with the best record. Should that happen this season, the award will go to Monty Williams. Right now, the Suns own the best record in the league, fresh off of their run to the Finals last season. Williams has the next-best NBA coach of the year odds (+275) at this point, and could easily take home the hardware as Phoenix continues their domination.

There have been many feel-good stories this season. Both Cleveland and Chicago have outperformed expectations and much of the credit goes to JB Bickerstaff and Billy Donovan. The Cavs’ unlikely climb to the top of the East, even with all of their injuries, has Bickerstaff (+350) with the third-best odds for the award. Donovan (+400) is just behind him as the Bulls continue to fight for the top seed in the conference.

Now in his third full season, Jenkins has gotten his young team to buy in on both sides of the floor and it is paying dividends. The Grizzlies are in position to have home-court advantage in the playoffs, and they believe in what they are building. Jenkins will credit everyone but himself for their rise, but he is the engine behind this powerful machine.

And yes, there wasn’t even space in the tweet for Coach of the Year candidate Taylor Jenkins https://t.co/4pTxdiGF0S

As a small-market team, the Grizzlies have been often overlooked or pushed to the side. They are legitimate title contenders, with a star that is worthy of MVP consideration. It is only right that they also be recognized as the team with one of the best coaches in the league.