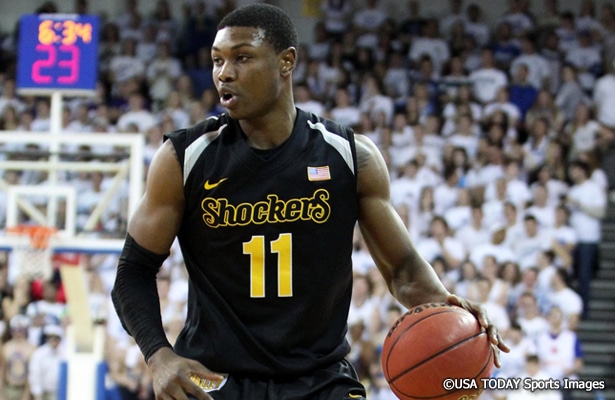 As the clock ran out and their team’s 34th consecutive win was in the books, the Wichita State fans erupted, serenading the Shockers as they walked off of the court.

By winning the Missouri Valley Championship on Sunday, the Shockers became the first team to enter the NCAA Tournament undefeated since UNLV back in the 1990-91 season. Wichita State went 34-0 this season and emerged as a juggernaut. They dismantled teams, winning their regular season games by an average of 16 points this season, and only one contest was decided by fewer than five points.

While this has been a historic season for the Shockers, the players feel like they have yet to accomplish anything. After advancing to last year’s Final Four and coming just short of beating the eventual champion Louisville Cardinals, Wichita State is determined to win it all this year.

The Shockers aren’t your typical mid-major underdog that might make some noise in the Big Dance. This is one of the best teams in the nation and they’re capable of cutting down the nets in April.

Cleanthony Early, the team’s leading scorer (16 PPG) and rebounder (5.9 RPG), is confident that the Shockers have what it takes to make another deep postseason run.

“Me and my teammates, we’ve been through this before,” Early said. “We went to the Final Four. We have that confidence. This isn’t a new experience for us. It helps. In life, when you’ve been through something, when you’ve done something, you get more comfortable. We act like we’ve done it before, because we have. We have a great work ethic, and we don’t let anything distract us from our goal.”

Everyone on the roster understands that this season means nothing if they aren’t the final team standing in the NCAA tournament. “Not Satisfied” has been the Shockers’ motto since last year, and they’ve brought it back this season.

“We just need to stay focused and remember that just because we’re undefeated coming into the tournament, that means absolutely nothing. We need to respect our opponents, go out there and work hard and realize that, hey, this could be our last game, so we need to play our hearts out.”

The Shockers play with a suffocating, physical style that will make them a very tough out. It also helps that they’re bringing back largely the same core from last season. While many teams are adjusting to the Big Dance and trying to calm their nerves, the Shockers know what to expect and are better prepared this time around than they were last year.

“I think we’ve been through more adversity and we have more experiences just within games,” Early said. “We’re ready for anything that’s thrown at us. The kinds of guys that we have, I think we all just pay attention to detail. We all have a certain type of character and ability about us that we understand that we’re good, but we can be better. We are overlooked to a point, and we kind of use that as motivation to fuel the fire.”

The Shockers have a large chip on their shoulder. Even though they’re ranked second in the country and seem to be getting more respect as of late, they still feel like some people don’t take them seriously as a title contender. Some critics have pointed out that Wichita State hasn’t played any tough teams this year, which is something that clearly annoys Early.

“If I remember correctly, we went to the Final Four with pretty much the same team as last year,” Early said, pointing out that the team beat Pittsburgh, Gonzaga, La Salle and Ohio State during last year’s postseason run. “We use it as motivation. We have experience, since we were on last year’s team and we’re the key focal points of this year’s team. We’ve also helped the younger guys, all the guys that just came in to follow behind our lead. At the end of the day, we understand what we’ve been through and where we could go. I guess you could say we didn’t play any ‘big-name teams’ this year, but [we did last year] and we know that each game could be won. Anyone could be beat in college basketball if you go out there and play better that day in that game.”

As Wichita State has risen to prominence, Early has also started to get more recognition. The Middletown, N.Y. native was a junior college star at Sullivan County Community College before transferring to Wichita State. The two-time Division III NJCAA Player of the Year was also considering Baylor, Alabama and Missouri among others, when he got stranded at Wichita State during a visit due to Hurricane Irene.

“There were so many things that led to me coming to Wichita State: my visit, meeting the people that were here, my coaches, what [Gregg] Marshall was doing with the program,” Early said. “When I came out to visit, I got here and wanted to stay for a couple more days. You know how visits are only two days? I got to stay out here for like four or five days. Anyone can show you the best time in two days, but when you get to stay here longer, you get to see the real thing. I was impressed. There isn’t much to do out here, so it’s a place where you can focus, but it’s big enough that it’s a city. I don’t think a lot of people know that.”

Early grew up studying a wide range of players, from “Michael Jordan to Scottie Pippen to Tracy McGrady to Skip 2 My Lou.” These days, he says he has been compared to players like Carmelo Anthony, Paul George and Kawhi Leonard. While Early is obviously focused on Wichita State’s season right now, he does believe he has what it takes to play in the NBA and is hoping to prove that in the near future.

“I have played with a lot of professional basketball players that are in the NBA, guys that went to the NBA recently or are supposedly going to the NBA this year, and I’ve always competed with them at a level to where I knew I was good and knew I could potentially make it there,” Early said. “It was just a matter of getting that exposure and being seen and just working my butt off. I just believed that I had to get so good that they can’t ignore you, you know what I mean? I feel like my game can translate to the NBA because I always know that I’m going to work hard to improve on anything I need to improve on.”

Selection Sunday is on March 16, and Wichita State will likely be a No. 1 seed in the tournament. It remains to be seen if they can make history and finish this season undefeated, but they certainly have a shot. If the Shockers win the national title, they would join the Baylor women of 2012-13 as the only Division I teams in NCAA history to go 40-0.