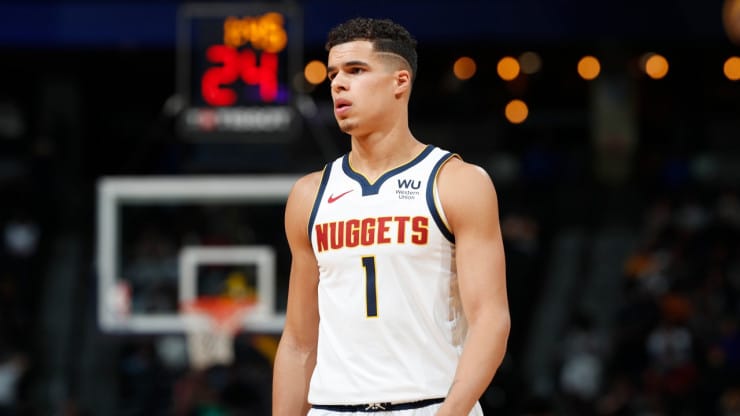 The Denver Nuggets had a promising season cut short last year when star guard Jamal Murray went down with a knee injury on April 12. They still managed to earn the No. 3 seed in the Western Conference when the playoffs got underway. Led by the league MVP Nikola Jokic, Denver defeated the Portland Trail Blazers in the first round before being swept by the Phoenix Suns.

Denver made a massive trade just a few weeks prior to Murray’s injury to acquire big man Aaron Gordon from the Orlando Magic. The fourth overall pick in the 2014 NBA Draft was the perfect fit for this team, filling the void left by Jerami Grant. Less than two weeks ago, Gordon and the team agreed on a four-year contract extension worth $92 million. He just turned 26 years old and will fortify their defense heading into this season.

With Murray likely to miss most of this season, what are the expectations for this team? Can the Nuggets hold up over the course of an 82-game season with Jokic, Gordon and Michael Porter Jr carrying the load?

The biggest concern in Denver this year will be their depth. Obviously, Murray is a huge loss and while they have a solid point guard in Facundo Campazzo, he is far from the offensive weapon that Murray is. The 30-year old relies more on his experience and basketball IQ than his athleticism. He averaged 6.1 points and 3.6 assists per game last season, starting in 19 of the 65 games he played.

Will Barton will be the X-factor for Denver this season. The versatile wing looked good coming back from his injury late last season and should be fully healthy when training camp opens. He and Monte Morris will likely see an increase in minutes this season and should be able to handle the extra load. PJ Dozier is another guy that could see his role increased this year. Austin Rivers is returning after a strong showing to end the season, but he can’t be asked to do much more.

The only other guard that Denver added to their roster is Nah’Shon ‘Bones’ Hyland, whom they selected 26th overall in the draft this summer. The former VCU product is a prolific shooter with great length that allows him to play passing lanes and contest shots on the perimeter. He has demonstrated a knack for changing speeds with the ball and will become even better as he adds muscle to his wiry frame.

Bones Hyland says he played five pickup games on Nikola Jokic's team during the Nuggets' open runs: "We didn't lose. It looked like 2K. You could just tell the connection. It was clicking instantly. They put me on a different team because it was too easy honestly."

The Nuggets also added forward Jeff Green in free agency, which was a sneaky good move. Essentially, they traded Paul Millsap for him, as the veteran big man signed with the Brooklyn Nets. The move can be viewed as an upgrade for Denver, as Millsap’s role was diminishing. Green provides them with another versatile defender on the wing and is a solid shooter on the offensive end of the floor.

Offensive firepower will be the one thing to keep an eye on with the Nuggets this season. They had the seventh-best offensive rating last year, but much of that was based on the play of Murray, who averaged 21.2 points per game on 48 percent shooting. He is capable of taking over at any point, as he demonstrated two years ago in the playoffs when he scored 50 points on two occasions in their first-round series with the Utah Jazz.

That is where Porter Jr comes in. Projecting breakout seasons is not easy but this one appears to have all of the ingredients required for the Most Improved Player Award. Denver has an MVP in Jokic but passing and rebounding are what he does best. Gordon has improved offensively but his role is to be the best defender on the team and to rebound. Barton and Campazzo are known more for their court vision and passing ability. With the team’s best offensive weapon on the sidelines, the time is now for Porter Jr to establish himself.

Porter Jr finished third in votes for this award last season and should be considered the favorite for it this year. He has the potential to be a 25 point-per-game scorer and put himself into the All-Star conversation. He shot the ball with great efficiency last season (44 percent from three-point range and 54 percent overall) and will have a greater volume now with Murray out. A monumental leap is in store for Porter Jr this season if he continues to progress.

Denver has a solid mix of veterans and young players that make up their roster. They have an outstanding leader in Michael Malone, who enters his seventh season as head coach. The Jazz will still be the favorites to win the Northwest Division but writing off the Nuggets would be a monumental mistake. They should still be the second-best team in the division, with apologies to the Portland Trail Blazers.

Malone has proven to be one of the best at maximizing player personnel, utilizing a team concept approach to the game. They have a generational playmaking big man leading the way but everyone seems to know their role and plays them to near perfection. Even after Murray went down towards the end of last season, the team bonded together and finished strong, getting out of the first round of the playoffs and losing to the eventual conference champions.

They will need Jokic to continue his strong play, but if Porter Jr has his breakout moment and Gordon is the same player as last year, this Nuggets team will still be a solid playoff team in the West. Once Murray returns to the floor and has some games under his belt, Denver will be an incredibly dangerous team in the postseason.