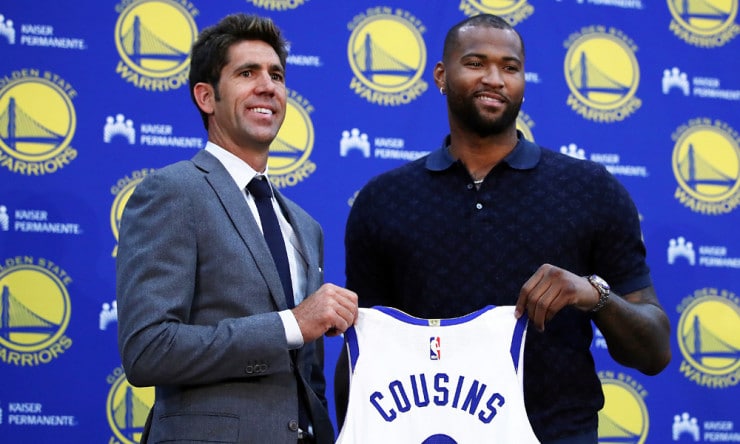 The Golden State Warriors were already heavy favorites to win their third consecutive NBA championship. When DeMarcus Cousins agreed to join the Warriors for the 2018-19 season, many players and fans groaned at the prospect of a non-competitive scenario.

When Cousins heals, the Warriors will appear next to unbeatable. NBA futures now rate the Golden State Warriors as -175 favorites to win another ring, according to odds from BeABetterBettor.com, which translates to a 63.64% chance to win the 2019 NBA Finals.

Some will blame Boogie and Durant for chasing a ring with an established champion, but that opinion ignores the unique free agent market scenario which created the current dearth of parity – and a strange lack of demand for the services of DeMarcus Cousins.

Before DeMarcus Cousins broke out under the tutelage of coach Mike Malone, Boogie was already one of the most exciting young talents in the association. Over his first three seasons, Cousins averaged 16.3 PPG, 9.8 RPG and 2.3 APG, along with 1.3 steals and 0.9 blocks.

When coach Malone served as bench boss for the Kings, DeMarcus responded by turning into an all-star. Cousins lifted his game into elite territory, averaging 22.7 PPG, 11.7 RPG and 2.9 APG. Perhaps more impressive, he leveraged his impressive frame and athleticism as a rim protector and defensive menace, with 1.3 blocks and 1.5 steals per game.

After a 9-5 start to the 2015 season, DeMarcus went down with an injury, which triggered a Kings losing streak and the departure of coach Malone, who established an excellent rapport with Cousins. Boogie balled out anyway, with 24.5 PPG, 11.9 RPG, 3.2 APG and 1.5 steals and

1.5 blocks per game during his next three seasons. DeMarcus even added a three-point shot to his arsenal, hitting treys at a .356 rate during his last campaign with the Kings.

Sacramento attempted to build winner around DeMarcus, but things didn’t work out for either party in the constantly shifting competitive landscape of the NBA. When Cousins entered the association during the 2010-11 season, the rise of the three pointer was just beginning and the value of a traditional big man had yet to fall.

Cousins career happened to begin at the end of an era while his prime years took place in the beginning of another basketball milieu – a strange situation for any talented athlete.

A trade from Sacramento to New Orleans was best for everyone, giving Cousins a chance to make the playoffs while stocking the Kings with vital draft picks and prospects. Despite concerns that Boogie and the Brow wouldn’t mesh well as towering, ball-centric big men, DeMarcus Cousins altered his game to compensate for the interior dominance of Anthony Davis.

In 2017-18, Cousins posted personal highs of 12.9 rebounds and 5.4 assists per game, along with 1.6 steals and 1.6 blocks per game. Statistically, DeMarcus distributed more than ever alongside Davis while absorbing more physical punishment in the paint than any other point in his career.

A blown Achilles during a hustle play would prevent Cousins from completing his first full season with a playoff contender. This forced him to watch from the sidelines as Playoff Rondo and Davis swept Portland, before the Warriors eliminated the Pelicans in five games. After playoff

success without DeMarcus, New Orleans decided to focus more on the perimeter shooting of Nikola Mirotić.

Incredibly, zero teams offered Cousins a contract offer for the 2018-19 season, despite the fact that he would immediately boost the championship hopes of any contender when his Achilles heals. DeMarcus and his agent obviously planned for this contingency, because they didn’t wait long before joining the Warriors for a ludicrously low $5.3 million single-year contract.

On paper, the Golden State Warriors have the greatest starting lineup in NBA history for the 2018-19 season. Curry, Thompson, Durant, Green and Cousins should be able to completely decimate any opposition. A few years ago, no one would dare believe that this group could play together outside of an all-star or summer Olympics squad.

When the news spread over basketball Twitter, players and fans lined up to express their displeasure with Cousins and the Warriors organization. Some even hinted at forgoing the next season, implying that Golden State cannot be beat unless injury strikes. Even then, the Warriors would probably win a championship minus two all-stars.

The current labor agreement, Boogie’s injury and the three-point era created the conditions necessary to undervalue the services of DeMarcus Cousins. Signing Kevin Durant became possible with the rapid rise of the salary cap due to a rich television and media deal.

Some blame players or teams for the lack of parity, but the revenue increase of the new contract with TNT and ESPN injected the NBA with a dose of healthy chaos.

Parity’s never been the end goal of the NBA – and that’s fine. Superpowers have almost always ruled over the association, including the Celtics, Lakers, Bulls, Pistons, Spurs and whatever team employs LeBron.

Overall, the sport continues to thrive worldwide. The current narrative of “the Warriors versus the world” doesn’t damage pro basketball. If anything, witnessing unprecedented greatness drives interest in the sport, and Boogie’s presence will add to the legend of the Golden State Warriors.