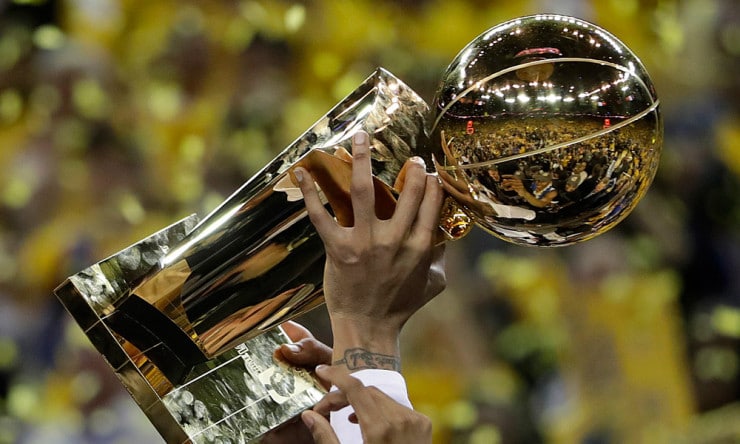 Many deadlines have now passed with NBA meaning that contenders cannot move in order to boost their team’s chances of success. Nevertheless, while the opportunity was there, many teams made the most of it. Marcus Morris has been acquired by the LA Clippers, and Robert Covington has now gone over to the Houston Rockets. Playoffs are only drawing closer and closer, with the likes of Anthony Davis and Lebron James battling it out. If you’re thinking of placing a bet this year, take a look at the odds below then take a look at the best NJ online sportsbook bonuses (list) before placing your bet.

Although previously seen as the underdogs to the Clippers, which was confirmed when they lost to them on two occasions, they still remain a firm favorite at the moment for winning the championship. Hopefully, they’ll have the home-court advantage once the Western Conference playoffs kick-off. If ever they needed a Darren Collinson influence, it would be now.

Betters remain skeptical this year due to last year’s terrible playoff against the Toronto Raptors. Although they did play particularly well this season, people aren’t putting their money where their mouths are before they show signs they can win this season.

The deadline introduction of Marcus Morris has definitely put this team to an advantage, keeping him from joining rivals as well. There’s also the benefit he’s been able to defend Kawhi Leonard on potential playoffs. Its no surprise betters are placing their trust in the Lakes, but with Morrises fantastic recent performance, who’s to say this can’t change?

This season has been a bit of a struggle for them, despite entering as one of the favorites. Although Alec Burks and Glenn Robinson will somewhat boost the bench’s chances of success, there are other more pressing issues amongst the wider team. The performance of Ben Simmons and Joel Embiid has been less than satisfactory, throwing their long-term future with the team in an uncertain light.

Even though there is skepticism about how this team is better than the big boys such as the Lakers or Rockets, they still remain a dynamic group, switching things up recently especially with defense and starting center/wing.

All these teams are at a good advantage this time around. Particularly the Heats who now have Andre Iguodala, plus multiple changes to Denver’s bench. Nevertheless, the teams will remain with much of the same core they’ve had during the season.

Although they haven’t yet received appreciation expected for multi-season success, they are slowly improving than other comparable teams, despite having low odds of 25-1. They’ve managed to improve their record this season to 37-14. It appears this team won’t go down without a fight.

This team has been blighted with injuries recently, affecting their performance. Just some examples include Luka Doncic spraining his ankle, Dwight Powell rupturing his Achilles tendon. This hasn’t been helped wither by Kristaps Porzingis lackluster performance so far. As can be expected, the Mavericks are now looking at next year to contend properly.

They are doing surprisingly well but still have a fair way to go before they can truly work towards achieving the title. We were expecting a somewhat better performance on the return of Victor Oladipo. Indiana is in a similar sphere, only shooting 24.5% from the field.

Again, another two teams that have been unfortunate with injured players. Despite this, however, they’re doing well with a strong team such as Damian Lillard and Kyle Irving who have both recently displayed impressive performances on stage. Nevertheless, this doesn’t take away the threats that could occur postseason due to the mediocre record of Star Guests.

The odds of both teams are somewhat unusual, particularly Oklahoma City which looks particularly out of place compared to teams above them. San Antonio remains closer to the likes of Portland and Brooklyn in the standings, but this time around are with Oklahoma City 150-1.

They have a more enviable record than some, however, only have odds of 200-1 this time around. Nevertheless, their odds remain better than the Nets and Blazers. Another concern is the loss of two crucial players, Jae Crowther and Solomon Hill when the Andre Iguodala trade comes around.

There are a couple of exciting things going on with these teams. There is one playoff left to go which is with Orlando Magic in the Eastern Conference at number eight seed. D’Angelo Russell has been joined with Karl-Anthony Towns. However, this isn’t expected to make much difference this year.

It has been difficult for these teams this year with the loss of key players like Andre Drummond and D’Angelo Russell. We think it’s highly unlikely the teams have any chance of success in this year’s championships. But who knows what could happen next time around?