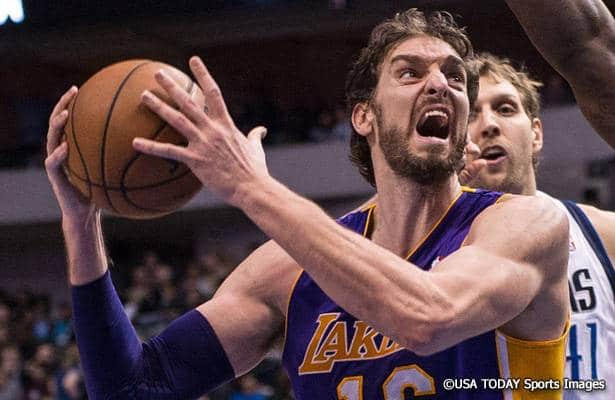 When we last heard of the Pau Gasol to Phoenix rumors, it appeared the Suns were souring on the idea of giving in to the Lakers’ reported desire to acquire a particular first-round pick (closer to middle of the round) of the upcoming 2014 NBA Draft. Either that, or they are truly playing hardball with the Lakers while awaiting Gasol’s re-evaluation of his injured groin scheduled to follow the All-Star break.

The reality is, while Gasol’s post productivity and veteran leadership could be precisely what the Suns need as they head into what they hope results in a playoff run, their potential four first-round picks in the upcoming draft give them more options than perhaps any other team in the league to complete a deal for an available player of their choosing.

Philadelphia’s Evan Turner and Thaddeus Young are also viable options for teams in search of additional rotation contributors, as each of them are available and happen to be in the midst of career seasons. If they choose to prioritize defense with any deadline deal, Turner’s ability to defend versatile scorers, in particular, could be very appealing to the Suns. Although they have plenty of interchangeable swingmen, they don’t have many options for defending the league’s most lethal scoring threats outside of P.J. Tucker. Tucker has proven to be a solid defender, but multiple options are necessary if for nothing more than the expected foul trouble that comes along with competing against the league’s best scorers. If they elect to go with adding size, while Young’s scoring and slashing ability could also help, ultimately, a healthy Gasol seems to be a better fit given the necessity for a post presence.

At 30-21, they are still right in the thick of things in the Western Conference playoff race. Even though they are just one game back of the West’s sixth seed, the Suns are also 11-10 since Eric Bledsoe went out due to knee surgery.

Point guard Goran Dragic has definitely been strong this season, but the Suns were at their best when they had both young guards as weapons. While Bledsoe is reportedly recovering as expected to coincide with a return some time after the All-Star break, the Suns also know that having additional scoring and playmaking options down the stretch of games (and the season) would also be in their best interest.

The medical staff Bledsoe mentioned is another reason why Gasol could conceivably work in Phoenix. Gasol is still highly effective offensively, but his productivity does tend to fluctuate depending upon his overall condition. The Suns have one of the best medical staffs in the league, which could help Gasol’s game and possibly entice him to re-sign this summer when he’ll become an unrestricted free agent.

Like the Suns, we’ll all just have to wait for the results of Gasol’s re-evaluation. The good news is, regardless of the results, we should at least have some sort of answer by next week’s NBA trade deadline (February 20).

To Dunk, Or Not To Dunk

Although HEAT forward LeBron James has never chosen to participate in the annual Dunk Contest, much was made of his recent ‘personal contest’ from late last week. Even though James doesn’t appear any closer to fulfilling the wishes of those adoring hoops fans still holding out hope, his recent display had us a bit nostalgic about some of the epic battles and contest dunkers from yesteryear.

Michael Jordan vs. Dominique Wilkins, Vince Carter vs. gravity, and Nate Robinson vs. Dwight Howard seem to be the battles a majority of people remember first. But that didn’t stop plenty of hoops fans from mentioning some great additional names like Dee Brown, Spud Webb, Shawn Kemp and Kobe Bryant. We conducted an impromptu social media poll for the top-three contest dunkers of all-time: