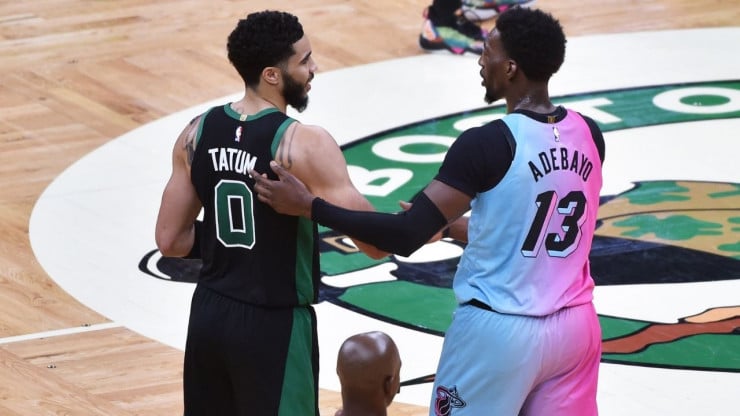 Close friends Jayson Tatum and Bam Adebayo were the life of the party at fellow NBA star and draft classmate DeAaron Fox’s wedding.

Tatum and Adebayo are known to have a close relationship and share many iconic moments together already at such young ages, like Adebayo’s block on Tatum’s dunk attempt in the Eastern Conference Finals two years ago.

More recently, Tatum and the Celtics sent the Miami Heat home in seven games to win the Eastern Conference and advance to the NBA Finals where they eventually fell to the Golden State Warriors in six games.

Adebayo and Tatum won gold together at the 2020 Tokyo Olympics for Team USA, alongside co-stars Kevin Durant, Damian Lillard, and Devin Booker.

The pair are often seen interacting on each other on social media such as Twitter and Instagram, with Tatum jokingly claiming that he is taller than the Heat center.

Adebayo admitted to sending Tatum a photo of the famous block on each of the birthday’s he has had since, but the former Duke star got the last laugh earlier this year.

Fun fact: Every year Bam Adebayo texts Jayson Tatum on the anniversary of the block. Plenty of friendly pettiness in this series. pic.twitter.com/ryi48eOVl8

Both the Miami Heat and Boston Celtics with their two young stars are expected to mount serious challenges to reach the NBA Finals once again this season as basketball operations resume in under two months.