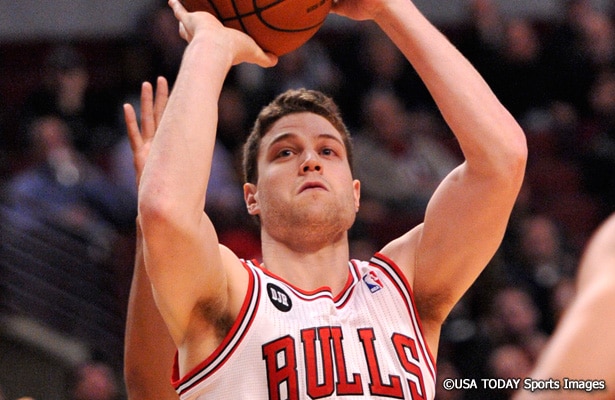 A few weeks ago, when winter buyout free agents were hitting the open market and latching onto playoff teams, a lot of fans got really excited about potentially valuable players joining their favorite team at a time of year when there just wasn’t much else going in the NBA.

During that time, few players sparked more excitement than Chicago’s Jimmer Fredette, because a charismatic former lottery pick bringing shooting and three-point efficiency to a solid playoff team severely lacking in both is admittedly pretty newsworthy.

So far, though, the marriage has been relatively uneventful, as Fredette has only played in four games for the Bulls since signing at the beginning of the month. Even when he does see the floor, it’s in garbage time.

Of course, he’s learning a new system, new city and new teammates, which takes a lot longer than two-and-a-half weeks, but he still feels pretty confident that he’ll be a major contributor for the Bulls by the time the postseason rolls around.

“I wanted to come to a team that was winning and that was going to be going to the playoffs, and hopefully I can be of help,” Fredette told Basketball Insiders. “I think I can stretch the floor for these guys and provide some outside shooting and some scoring. I think it’s a good fit for all of us.”

To show how well he fits, however, Fredette needs to get himself on the floor. A defensive liability like Fredette can be masked in Tom Thibodeau’s rotations, but everybody involved would just much rather have Jimmer figure out how not to be a liability on that end of the court. That, he thinks, will go a long ways toward getting him some more floor time.

“[I have to] work hard and continue to get down the plays and the lingo and the defenses,” Fredette admitted. “Play hard defensively—that’s the biggest thing is to really know the defenses and the call and to play hard. Offensively, [Thibodeau] will let you go.”

One would assume that it would be hard to pick up Thibodeau’s defensive rotations this quickly, but Fredette truly does see himself making fast progress.

“I feel like I’m picking it up pretty quickly,” Fredette said. “It’s just about ball pressure, getting into your guys. I know the calls and everything. I’m pretty smart with that type of stuff so I’m able to at least when I hear the call know what it is. It’s all about just having the mindset of having the ball pressured, so that’s what I’ve been working on.”

Thibodeau is as demanding as rumored, but so far Fredette is savoring the challenge.

“[Thibodeau] is intense every single day,” Fredette said. “He wants the best out of his players, and he wants you to be a championship guy. That’s what he wants and that’s what this team wants. He’s has that type of mentality every single game. I think it’s great.”

What hasn’t been great for Fredette, though, is actual playing time. One has to believe it’s coming, as Chicago continues to be the league’s worst-scoring team and one of the NBA’s most abysmal three-point shooting teams. Should Jimmer learn the ropes quickly enough, he could be a pretty major asset for this team by the time the playoffs roll around. That deep threat role has worked wonders for Kyle Korver’s career and Marco Belinelli’s career, and Fredette is acutely aware of that.

The fans are ready for another deep-ball sharp-shooter to root for. The first time Fredette stepped foot on the United Center floor as a Bull, the crowd gave him a standing ovation. He’s already a fan favorite, which has humbled him early in this second chapter of his NBA career.

“I was appreciative of the fans,” Fredette said, grinning. “The way that they supported me when I first got here, and I know it’s a great sports town and that they love their teams here. I’m excited to be a part of it, and hopefully there are more cheers to come.”

Playing time needs to come first, obviously, but he should be a good fit on this team once he finds his place in the rotation. From there, the cheering won’t be rare. Chicago is ready to love this kid, and he’s ready to make them.