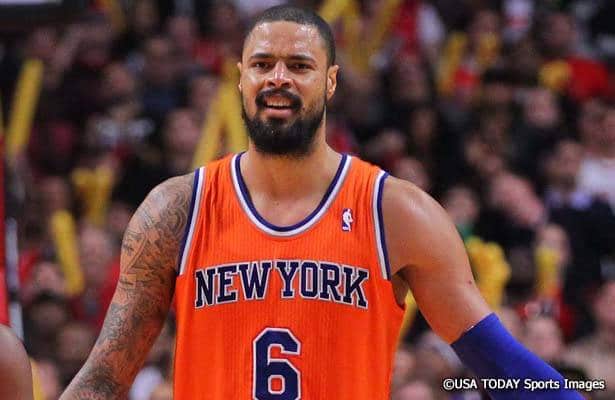 The Dallas Mavericks and New York Knicks executed a six-player trade on Wednesday, returning Tyson Chandler to the Mavericks along with Raymond Felton.

The Knicks picked up Jose Calderon, Samuel Dalembert, Shane Larkin and Wayne Ellington, in addition to the 34th and 51st overall picks on Thursday’s NBA Draft.

The Mavericks technically acquired Chandler and Felton by trading Ellington, Calderon and Dalembert ($13,144,318 in salary).  The trade exception is for Larkin’s full salary, which has yet to return a player.

Under the rules of the collective bargaining agreement, when a non-taxpaying team deals out $9.8-19.6 million in salary, they can acquire up to an additional $5 million in payroll — enabling Dallas to take in up to $18,144,318 from New York.

The taxpaying Knicks were able to use Chandler’s salary (padded by 125 percent) to acquire all four Mavericks — New York’s trade exception is for Felton’s full salary.

Another complication in the deal was Dalembert’s 15 percent trade bonus.  Unlike Chandler, Dalembert’s 2014-15 salary is only partially guaranteed ($1.8 million).

The Mavericks are responsible for paying Dalembert the full $580,093 kicker.  The tricky part is applying the bonus with a proration to account for next year’s partial guarantee percentage of 46.544 percent.

NBA trades are rarely simple, but the Mavericks and Knicks deal was deceptively complicated.

If Carmelo Anthony does decide to leave New York, the Knicks will have about $66.2 million in salary (including the non-guaranteed contracts of Lamar Odom, Shannon Brown and Jeremy Tyler) — slightly above the projected $63.2 million salary cap.

The luxury tax threshold projects to be $77 million, giving the Knicks room to use their full Mid-Level Exception ($5.305 million) and their Bi-Annual Exception ($2.077 million) — although utilizing either would trigger a hard cap (about $81 million).

The Mavericks now have $37.1 million in guaranteed salary, including picking up the option on Jae Crowder two weeks ago.

Dallas will have up to $26.1 million to spend, less whatever the team uses to re-sign players like Dirk Nowitzki, Shawn Marion, Vince Carter, Devin Harris, DeJuan Blair and/or Bernard James.

The only player that appears to be a lock to return is Nowitzki.  If he signs back at a discount, he may help the Mavericks try and lure players like LeBron James, Carmelo Anthony or, perhaps more realistically, Luol Deng.

With their 21st pick to the Oklahoma City Thunder from previous trades, the Mavericks no longer have a selection in Thursday’s draft.