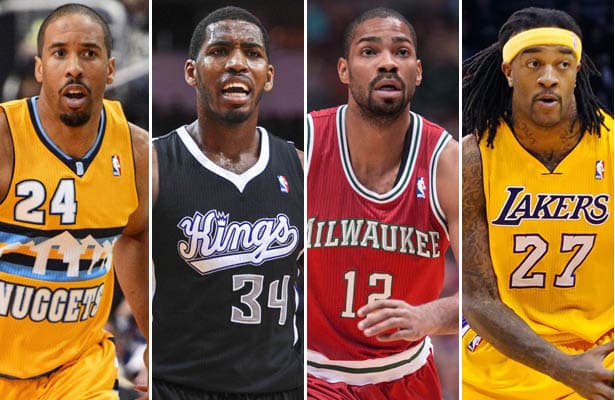 Not What Expected Was It?:  The day before the NBA Trade Deadline is always a little anti-climactic. There is usually talk of two or three big names that would require complex deals and those get kicked around all day only to putter out and die by day’s end. That’s the normal script of the trade deadline. What transpired on Wednesday is typical of deadline’s past. So here are the two things that got completed yesterday.

Lakers Trade Steve Blake To Warriors:  Roughly 70 minutes before tip-off of last night’s game Laker guard Steve Blake was pulled aside and told he was dealt to the Golden State Warriors in a package deal that will return guards MarShon Brooks and Kent Bazemore. The move makes a lot of sense for both franchises. The Warriors get a tough and gritty veteran point guard in Blake to help solidifying a shaky second unit in Golden State, while the Lakers get to take a 28 game look at Brooks and Bazemore, who they will hold rights to this summer. Should either show the promise that some of the other Lakers “finds” have shown this season the Lakers can re-sign them this summer after spending their cap money in free agency or in trade. Brooks will be an unrestricted free agent, so there is a chance he walks and Bazemore has a qualifying offer worth $1.115 million that can restrict his free agency. The Lakers traded a veteran for two promising young players that might fit in nicely to what the Lakers have stumbled upon this year as they construct the next evolution of Lakers basketball. The deal did not get the Lakers under the $71.748 million luxury tax line; they will still need to clear some $5.341 million to achieve that. The Lakers are believed to be trying to offload big men Jordan Hill ($3.5 million) and Chris Kaman ($3.183 million). If they are able to achieve that, the Lakers would avoid another luxury tax year and actually receive luxury tax payments for the first time in franchise history.

Kings Trade Marcus Thornton To The Nets:  The Kings had been trying to move Marcus Thornton for most of the year and triggered a deal yesterday that returned veterans Jason Terry and Reggie Evans to the Kings. The logic behind the move was two part: The first being the moving of Thornton’s contract, which had $8.05 million owed this year and an additional $8.57 million owed next year. This deal breaks that money up into two veteran players and allowed the Kings to create two more manageable ending deals for next summer. The second part is it added some veteran leadership to the locker room, which is something the Kings felt they desperately needed. For the Nets they added another volume scorer in Thornton to add more punch from the bench. Terry was having his worst year as a pro in Brooklyn averaging just 4.5 points per game on a dreadful 36.2 percent field goal percentage and Player Efficiency Rating of 7.60, by far the worst of his career. The addition of Evans gives the Kings some inside toughness to pair with DeMarcus Cousins. The Kings continue to work angles in addition to this move which includes shopping forward Jason Thompson and guard Jimmer Fredette.

Here are some of the things still getting serious play today:

Lakers Moving Jordan Hill:  The Lakers continue to talk about deals involving big man Jordan Hill and his $3.5 million ending contract. It looked as though the Cleveland Cavaliers were the front runners to obtain Hill as of last night, although the word is that Brooklyn, Charlotte, New Orleans, and Dallas are all still very much in the hunt. By acquiring Spencer Hawes, the Cavaliers are now seemingly out of the race for Hill. The Lakers are not looking to return a roster player in the transaction, which means they are really only interested in moves that allow them to remove Hill’s contract from their books. That’s going to be complicated for teams that do not have a traded players exception or an disabled player exception to absorb the deal unless a third team is involved. The Lakers are also talking with teams about veteran big man Chris Kaman. Much like Hill the Lakers are trying to offload Kaman’s contract, which like Hill would require a team with room to take the contract without returning salary to the Lakers. Talks are expected to continue on both front today. If the Lakers can move both players they will get themselves under the luxury tax line.

Knicks Moving Beno Udrih:  The New York Knicks were dreaming big as trade talks got underway this week, however as the 3:00pm EST deadline gets ever so closer, it’s starting to look like the Knicks may not have anything more than a deal to move disgruntled guard Beno Udrih. The word yesterday was that Udrih and the Wizards seemed likely, although there are a few additional teams said to be at the table including the Spurs and possibly the Nuggets. The Knicks seem like they will do a deal to rid themselves of Udrih, it just remains unclear if the deal will be with the Wizards or another team. Knicks swingman Iman Shumpert went down to a sprained MCL last night, so there may be some urgency on the Knicks part to get a serviceable roster player in return.

Bucks Moving Gary Neal:  There has been a lot of talk about the Bucks having multiple suitors for disgruntled guard Gary Neal, however with Golden State addressing their point guard needs with the Lakers last night, acquiring Steve Blake in a deal, it seems that Milwaukee may have lost one of its favored dance partners. The Bucks are fielding calls on a number of fronts and are said to have Phoenix, Charlotte, Oklahoma City and Sacramento in the mix. So Neal still seems like a player on the move. The Bucks are reportedly open for business on a number of players, so it’s expected that they will make a move or two before the clock strikes 3:00pm EST.

»In Related: The History of NBA Trades

Kings Moving Jason Thompson: The Sacramento Kings are trying to move forward Jason Thompson, however there does not seem to be a huge market for him. There was talk that the Cleveland Cavaliers were at the table with a deal built around Cavs guard Jarrett Jack, but only if the Cavs could offload Thompson to a third team. Thompson is a tough sell mainly because he has five percent trade kicker in his deal and has two more fully guaranteed more seasons worth roughly $12.46 million and a third season worth $6.85 million of which $2.65 million is fully guaranteed. Three more years and $15.11 million guaranteed is a hard sell for some teams, especially for a player averaging 7.6 points per game. Talks are expected to continue today, although this deal could very easily fall apart.

Grizzlies Sniffing For A Small Forward:  The Grizzlies have been linked to a number of players, however sources close to the process label their activity as far lower than being reported. The Grizzlies did have some very cursory talks with Golden State early in the process. The Warriors were looking at Grizz big man Kostas Koufos, when the Grizz asked for Harrison Barnes in a deal the talks died on the table. The Grizz have been linked to the Minnesota Timberwolves, although those talks were labeled as “old news” and that nothing seemed likely on that front. The Grizz have had some recent talks with the Washington Wizards and would love to extract Martell Webster from the Wiz, but it’s unclear if the Wizards will move on that front. The Grizz are open for business and have a number of interesting chips to move, the question remains can they get something done before the deadline?

»In Related: Every NBA Teams’ Salary Cap Situation – At A Glance.

No Market For Andre Miller:  As much as Denver and Miller would love to see a deal today, sources continue to paint a bleak outlook for Denver and Miller getting a divorce today. The general consensus is that Denver won’t bring Miller back to the roster and at some point are going to have to waive him. Most teams didn’t value Miller much to begin with and now that the Nuggets almost have to move him the ability for Denver to extract any return for him seems to have dried up. That’s hasn’t stopped Nuggets GM Tim Connelly from trying to make a move, it’s simply that other teams do not see a reason to give up assets for a player that might get cut after the deadline. The Nuggets have more than Miller on the market. They are reportedly shopping Jordan Hamilton and have been fielding calls on forward Kenneth Faried. It seems unlikely that Denver is going to do anything with Faried, however Denver is still very much in play.

On Again Off Again Magic:  For most of the season in this space we’ve talked about how reluctant the Orlando Magic were in making a trade unless it was a landslide in their favor or it allowed them to clear up their roster for the offseason. For weeks the Magic stance has been that they were not going to do anything at the deadline and that very well could be the case. Sources close to the Magic process said Saturday that they did not expect anything to happen at the deadline; however a number of sources from other teams labeled the Magic as being active again.

The Magic played last year’s trade deadline in a similar fashion, for weeks they denied interest in trading guard J.J. Redick only to pull the trigger on an eleventh hour trade with Milwaukee.

The prevailing thought is that Orlando is going to hold the line, although it seems that Orlando may have done one last pass through the league before the deadline to try and drum up interest in some of the pieces they do not want or to see if the return price on guard Arron Afflalo has gotten to the point of pulling the trigger.

If there is a dark horse for a deal today it might be Orlando, or they could do exactly what they said they’d do and that’s sit this one out.

The Magic’s stance has been for weeks that their assets might be more valuable around the draft and free agency, so there is a really good chance that unless someone makes the right kind of offer that Orlando sits this one out.

If you are looking for the very latest on the 2014 NBA Trade Deadline Diary, make sure to check out the 2014 NBA Trade Deadline Diary. IT offers up to the minutes updates on all the news, rumors and transactions that get done today including insight on what’s currently being considered around the league. Check in early, check in often; all the news in one easy to consume place.